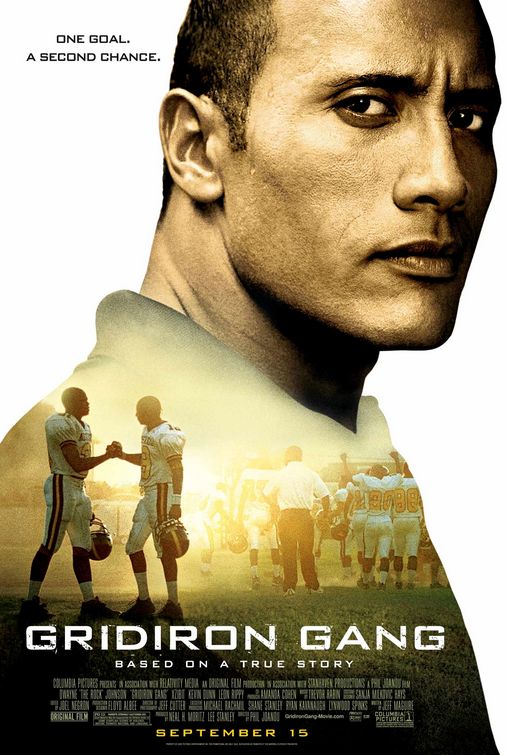 GRIDIRON GANG stars Dwayne "The Rock" Johnson as juvenile probation officer Sean Porter. Appalled by the 75 percent rate of recidivism among juvenile delinquents, Sean convinces the authorities to let him create a football team, the Mustangs, for some of the troubled teens. He also persuades a coach at a private Christian school to convince the officials at the football league to which the school belongs to let the Mustangs play. But, can he convince his young charges to put aside their ethnic differences, their gang rivalries, their lack of discipline, and their hopelessness to become a responsible team of high school drop-ins and athletes?

GRIDIRON GANG is a rousing, inspiring tale with some very strong moral values. Although it suffers from too much foul language and a humanist setting that undercuts the storyline's redemptive aspects, it's a very moving, exciting movie that pushes all the right emotional buttons. Audiences have seen this kind of sports drama before, but GRIDIRON GANG succeeds in telling it in a thrilling, heartfelt way. The Rock does a great job, as does the rest of the cast. MOVIEGUIDE® advises extreme caution, however, for the foul language.

(BBB, C, Pa, FR, H, LLL, VV, N, M) Very strong moral worldview about a probation officer and football coach trying to motivate a group of troubled teenagers, teaching them proper behavior and self-discipline and becoming like a no-nonsense substitute father to them, with some positive Christian references, including a positive reference to one of Jesus Christ's teachings in the New Testament, a positive reference to the need for prayer and an emotionally powerful extended reference to forgiveness, but spoiled by a lot of foul language displaying a pagan and antinomian, or lawless, streak of over-indulgence and the fact that the hero, the probation officer, works for the secular humanist government and, thus, cannot give the teenagers what they really need to improve their lives, which is a personal relationship with God through Jesus Christ; about 69 obscenities, including many "h" and "s" words and one "f" word, seven strong profanities, two light exclamatory profanities, and a few uses of the "n" word; strong violence, including much football action such as hitting, blocking and tackling, male teens get into a few fights, teen shoots stepfather dead after he hits teen's mother and knocks her around and down, drive-by gang shooting misses two intended targets but car eventually purposefully rams into one teenager and kills him, gang member wounds another former gang member but is stopped from killing him, and probation officer hits one juvenile with magazine after the teenager beat up another teenager and asks teenager how do you like being hit; no sex scene but brief kissing and at least one hug and teenage athletes admire cheerleaders; upper male nudity and some cheerleaders show midriffs in their uniforms; no alcohol; no smoking; and, gang activity rebuked, revenge implicitly rebuked, racism rebuked, anger rebuked, and bad adult role models rebuked.

A rousing, inspiring tale with some very strong moral values, GRIDIRON GANG suffers from too much foul language and a humanist setting that undercuts the storyline’s redemptive aspects. Still, it’s a very moving, exciting movie that pushes all the right emotional buttons. Audiences have seen this kind of sports drama before, but GRIDIRON GANG succeeds in telling it again in a most thrilling, heartfelt way.

The movie stars Dwayne “The Rock” Johnson as juvenile probation officer Sean Porter. It opens with Sean trying save one juvenile from ending up dead on the street when he’s scheduled to leave Camp Kilpatrick, a detention center in Los Angeles. The boy ends up dead, however, and his cousin, Willie, ends up at the camp after killing his stepfather while saving his mother from a beating.

Sean is appalled by the alarming rate of recidivism among the juvenile prisoners at the detention camp (75 percent). He convinces the authorities to let him create a football team, the Camp Kilpatrick Mustangs, for some of the troubled teens, including Willie. With help from the New Testament, Sean also persuades a coach at a private Christian school to convince the officials at the football league to which the school belongs to let the Mustangs play the other teams. But, can he convince his young charges to put aside their ethnic differences, their gang rivalries, their lack of discipline, and their hopelessness to become a mature, responsible and unified team of high school drop-ins and athletes?

There’s a lot of exciting, but rough, football action in GRIDIRON GANG, but the emotional center of the movie is on the young men’s progress and on their relationships with Sean and with each other. The Rock does a great job as Coach Sean Porter, as does the rest of the cast, especially Jade Yorker as Willie. Another inspiring aspect is Sean’s relationship with his supportive mother, who is dying. The movie also has some lighter moments of humor to relieve the heavy drama. All of these aspects come together in the movie’s thrilling, emotionally powerful climax.

GRIDIRON GANG has a very strong moral worldview, with some positive Christian content, including a positive reference to the New Testament and Jesus Christ and an emotionally powerful reference to forgiveness. These positive qualities are spoiled a little bit by the movie’s setting, which is a secular humanist juvenile detention center for troubled youths from the street. Thus, the movie contains a lot of foul language, including one “f” word and a few strong profanities. The structure of the plot is so well-written that it’s a great shame that the filmmakers decided they needed to include so many bad words in the dialogue. Also, the hero of the movie, Coach Porter, works for the secular humanist government in Los Angeles; thus, he cannot give his troubled teens what they really need, which is a personal relationship with God through Jesus Christ. Consequently, there is some talk in the movie about building the self-esteem of the teenagers, as well as talk about trying to become a better, more moral and responsible person, but without God, His law and His example in Jesus Christ.

To be fair, however, that’s the setting in which the real-life Sean Porter probably had to operate at Camp Kilpatrick and in dealing with the troubled teenagers on the Mustang team. So, although the movie rates an extreme caution from MOVIEGUIDE® because of the abundant foul language, MOVIEGUIDE® still commends Coach Porter and the movie for showing that there are some troubled teens in our world who need our guidance and assistance to better their lives and become responsible adults. In providing such guidance and help, Christians should be able to use both the Gospel of Jesus Christ and practical moral training by teaching positive traits like self-discipline, personal integrity, honor, responsibility, and forgiveness. After all, these traits are also gifts from God, as is eternal salvation through Jesus Christ. For, we are both justified and sanctified through Jesus Christ our Lord. Of course, purity is also a gift from God, and the tongue can be a source of all sorts of evil and villainy.