"Poignant, Comical Homage to the Golden Age of Hollywood" 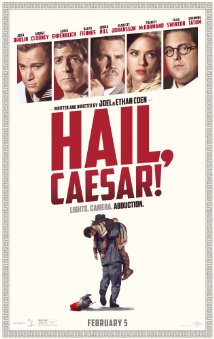 HAIL, CAESAR! is a goofy comedy from the Writer/Director brother duo Joel and Ethan Coen, with a surprising amount of strong, positive Christian content. Set in 1950s Hollywood, Eddie Mannix is a movie studio “fixer”, whose job is to keep the scandals of famous movie stars out of the press. A major star shooting a biblical epic is kidnapped for ransom. So, Mannix must fix his biggest problem yet and contemplate a job offer that would make his life much simpler. For guidance on this decision, Mannix goes to his wife, his priest and to God in prayer.

HAIL, CAESAR! finds many comedic moments in exaggerated, ridiculous situations, without falling into vulgarity. Surprisingly, the movie has multiple moments where the Gospel is presented in an eloquent, powerful way. Overall, it has its entertaining moments, though the movie’s quirky style won’t be everyone’s cup of tea. The representation of faith is refreshing for a Hollywood movie, and Movieguide® commends the Coen Brothers for it. HAIL, CAESAR! does have a few strong profanities however, and one or two off-color innuendoes, so caution is advised.

(CCC, BBB, ACAC, RH, CapCap, LL, V, S, A, D, M) Very strong Christian, biblical worldview in a comical context with main character who isn’t perfect and makes mistakes but who tries to do the right thing, seeks God in prayer and repents of sin, two strong monologues presenting the Gospel, and multiple symbolic scenes at the cross of Christ, and a scene of prayer; strong anti-communist message, and acknowledgment of their presence in Hollywood in the 1950s, though movie also makes light of their actual influence a bit, but ends up validating, in a way, the capitalism behind the studio system; eight light obscenities and four profanities (including two GDs and one JC); slaves are whipped on a move set, a man is smacked multiple times, and there’s some light western action violence with guns shooting; some sexual content and references include woman is pregnant outside of marriage, a reference to adultery, woman makes a sexual reference, and it’s rumored an actor engaged in sodomy to get a role; no explicit nudity, but woman takes pictures dressed provocatively briefly, and woman in bathing suit bears some cleavage; light drinking; light smoking; and, kidnapping, greed, bribery, hypocrisy, and blackmail.

HAIL, CAESAR! is a goofy comedy from the Writer/Director brother duo Joel and Ethan Coen with a surprising amount of strong, positive Christian content. Set in 1950s Hollywood, Eddie Mannix (played by Josh Brolin) is a movie studio “fixer”, whose job is to keep the scandals of famous movie stars out of the press. Loosely based off a real life Hollywood fixer named Eddie Mannix, who had his own number of scandals and moral shortcomings, the fictional Mannix in HAIL, CAESAR! is much more upstanding and devout in his faith.

The movie begins with Mannix in a confessional, repenting of the fact he lied to his wife about quitting his smoking habit. Employed by the fictional studio Capital Pictures, Mannix is always busy putting out fires and fixing career-ending dilemmas in which actors and actresses keep finding themselves. Among Mannix’s headaches is a swimming star DeeAnna Moran (Scarlett Johansson), who becomes pregnant outside of wedlock right before production starts on her newest movie. Additionally, sophisticated Director Laurence Laurentz (Ralph Fiennes) is furious he’s being forced to cast a verbally incompetent Western star by the name of Hobie Doyle.

The biggest problem of Mannix’s career, however, arises a group calling themselves “The Future” kidnaps major star Baird Whitlock (George Clooney), the lead in a major biblical epic. The group demands the studio pay $100,000, or else.

Pressed for time, Mannix pulls together the money while trying to ward off two twin sisters (Tilda Swinton), competing gossip columnists threatening to publish damaging rumors about Whitlock. During all this, Mannix receives a job offer from a private aviation company that would guarantee a lifetime of work, less stress and more time with his family. This difficult decision drives Mannix to seek guidance from his wife, his priest and God.

The long list of stars in HAIL, CAESAR!, as shown on movie posters and in trailers, is a bit deceiving, because many of them only have one or two scenes. The movie isn’t about them. It’s really about Eddie Mannix staying on top of his crazy job and his irresponsible, sometimes idiotic stars.

As such, HAIL CAESAR! is actually a comical homage to the Golden Age of Hollywood and the film genres of the past that made it so golden. It takes viewers behind the scenes of a busy studio lot in the 1950s. Uneven at times in plot, the movie makes up for itself with downright hilarious scenes, witty dialogue and poignant heart-filled moments. In Coen Brothers fashion, HAIL, CAESAR! finds many comedic moments in exaggerated, ridiculous situations, without falling into vulgarity.

Surprisingly, the movie has multiple moments where the Gospel is presented in an eloquent, powerful way. In one particular scene, Mannix brings in four religious leaders who discuss the theological accuracy of the studio’s new biblical epic, which is also titled HAIL, CAESAR! The faith leaders start debating the portrayal of Jesus. The rabbi insists Jesus be shown as just a man, but the priest argues in favor of Jesus being portrayed as the Son of God, the Savior of mankind. The priest beautifully sums up the Gospel, and the scene ends with hilarious banter that avoids being offensive.

[SPOILER ALERT] The movie’s big “twist,” which isn’t so big in the movie’s story itself, is that Whitlock’s kidnappers are a communist club of screenwriters who hang out in a fancy Malibu home and feel unappreciated. Whitlock, being the clueless person he is, spends a few days kicking it back with the communist screenwriters, having vague philosophical discussions about whether history is science or economics. Whitlock is easily influenced by the Soviet-obsessed nut jobs, but when he attacks capitalism back at the studio, Mannix literally smacks some sense into him, sending him off to film his final scene taking place at the feet of Jesus on the cross while commanding Whitlock to believe every repentant word he’s about to speak. This comical setup ultimately turns out to be quite moving. [END OF SPOILERS]

Overall, HAIL, CAESAR! has its entertaining moments, though the movie’s quirky style won’t be everyone’s cup of tea. The movie’s overt representation of Christian faith is refreshing for a Hollywood production, and Movieguide® commends the Coen Brothers for it. HAIL, CAESAR! does have a few strong profanities, however, and a reference to sodomy, so caution is advised.