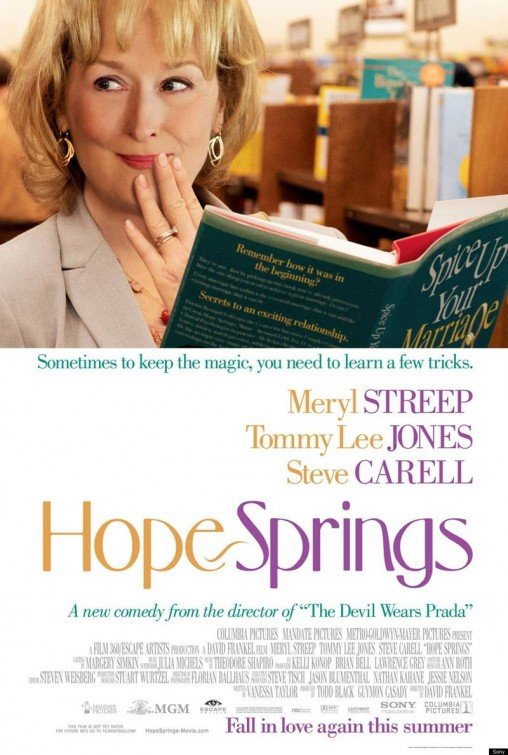 HOPE SPRINGS is a comedy about grandparents seeking help to revive their sex life. If the concept alone doesn’t turn you off, then be warned that the therapy they receive is not something to describe on radio. The movie opens with Kay trying to entice her husband, Arnold. His utter disinterest is painfully insensitive. He’s content to have a wife who fixes him breakfast every morning, leaves him alone the rest of the day, and sleeps in another room. Kay finds a marriage therapist in Maine. She purchases sessions and airline tickets with her life’s savings. Arnold very reluctantly comes. The therapist tries to drag out of them details about their sex life, fantasies and desires. He then gives them some lewd assignments.

The acting is excellent in HOPE SPIRNGS. It also has clever dialogue. However, the therapist’s advice and assignments lead to scenes no person would want to think about regarding their parents or grandparents. The way to save marriages and strengthen families isn’t kinky sex. Media-wise adults will want to avoid HOPE SPRINGS.

(PaPa, C, Ho, L, SS, A, D, M) Generally strong pagan worldview where the sexual gratification of an elderly couple is the major focus of the movie and in the final moments the wife thanks God for her husband but the thanks seems out of place since God is ignored or profaned in the rest of the movie, plus couple gets sexual/marital advice from a homosexual; three obscenities and three profanities; no violence; strong sexual content includes depicted marital sex, married couple attempts oral sex in movie theater, wife masturbates, and wife purchases book giving sex tips for straight couples from a homosexual; no nudity, because the obvious sex scenes aren’t performed in the nude; brief alcohol use; brief smoking; and, husband treats wife as less important than boring programs about golf.

The typical child who learns where babies come from realizes their parents didn’t get them from a stork, but they don’t want to spend a moment envisioning their parents’ sex life. HOPE SPRINGS was apparently made with the thought there’s an audience for scenes of grandparents attempting oral sex in a movie theater.

The movie opens with Kay (Meryl Streep) trying to entice her husband Arnold (Tommy Lee Jones) into having sexual relations with her. His utter disinterest is painfully insensitive. He’s content to have a wife who fixes him a piece of bacon and a fried egg every morning, leaves him alone the rest of the day and sleeps in another room.

Kay finds a marriage therapist in Maine she wants Arnold to visit with her. She purchases sessions and airline tickets with her life’s savings. Arnold very reluctantly comes.

The therapist, Dr. Feld (Steve Carell), tries to drag out of them details about their sex life, their fantasies, and their sexual desires. He then gives them assignments with the hope of reviving their sex life. One assignment leads to a botched attempt at oral sex in a movie theater. Another involves the purchase of a book about sex trips for straight couples from a homosexual.

The acting in HOPE SPRINGS is excellent. It also has many clever lines. However, the premise is simply repulsive and the visuals disturbing. Even if a couple is married, it’s simply not entertaining to watch their sexual escapades.

The secret to a great marriage is not in experimenting with unexplored sexual possibilities. It’s putting God first, your partner second and yourself third.

Where are the movies showing what it really takes to love your spouse more after 50 years of marriage than on the day you got married? Movies require conflict to drive a plot forward, but where are the stories of couples facing conflict together and succeeding? The world needs movies that truly strengthen marriages. The collapse of the family may be the greatest problem facing the world. Kinky sex therapy isn’t the answer.

On an interesting side note, the screening MOVIEGUIDE® attended was filled with elderly people who got their tickets through AARP. The screening actually started with a lengthy ad for AARP.