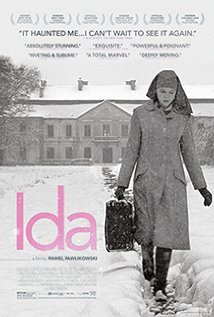 IDA is a powerful Polish movie. Anna, an orphan raised by nuns at a Polish convent, is a prospective nun during the 1960s, who must visit her family before she takes her vows. Anna visits her only living relative, Aunt Wanda, a judge and former prosecutor connected to the Stalinist regime, in an obscure Polish town. During her visit, Anna discovers her birth name is Ida Lebenstein and that her biological Jewish parents were murdered during World War II. Ida decides she wants to discover the location of her parents’ burial site.

IDA has a strong Christian worldview, mixed with humanist elements. This is mainly reflected in the very different decisions Wanda and Ida make after visiting the gravesite of Ida’s parents. Wanda’s inability to handle her tragic past is contrasted with Ida’s decision not to allow tragedy to determine her future. In fact, the movie’s ending affirms Ida’s Christian faith. IDA is superbly done, with great writing, directing, acting, and black and white photography. That said, a strong caution is advised for IDA because of implied lewd content and brief foul language.

(CC, B, H, L, V, S, N, AA, D, M) Strong Christian, light moral worldview in a Roman Catholic setting with prayer, positive mentions of Jesus, and characters with conviction, but some humanist content portrayed in one character who leads the movie’s nun protagonist astray for a moment; two strong profanities including one “JC” and one “GD” and a mention of “carnal love”; one of the main characters commits suicide by jumping out of her apartment’s window; two scenes of implied fornication, with unmarried couple in bed afterward; no explicit nudity but brief upper male nudity and two cases of woman’s bare back shown; alcohol use and drunkenness; heavy smoking of cigarettes; and, some ritualism and a Catholic nun strays for an evening to smoke, drink and spend the night with a man, but afterward realizes that’s not the life she wants.

In the Polish movie IDA, an orphan raised by nuns at a Polish convent, is a prospective nun during the 1960s who must visit her family before she takes her vows.

Anna visits her only living relative, Aunt Wanda, a judge and former prosecutor connected to the Stalinist regime, in an obscure town in Poland. During her visit, Anna discovers her birth name is really Ida Lebenstein, and her biological Jewish parents were murdered during World War II. She decides she wants to discover the location of her parents’ burial site.

Ida and her aunt embark on an expedition that will unveil their past and influence their futures. During their journey, they discover a tragic past and people who have an effect on their lives.

IDA contains a light Christian, moral worldview. This is mainly reflected toward the end where the two main characters make wholly different decisions. Wanda’s inability to properly handle her tragic past leads to a tragic decision. Ida, however, although she engages in brief immorality, doesn’t allow her tragic past to determine her future. In fact, she makes the decision to fall back on her Catholic Christian faith because it’s the one aspect of her life that determines her character. Thus, by the end, IDA presents Christian faith as something that’s powerful and positive.

The plot and its setting also contributes to the overall high aesthetic worth of IDA. Movies whose plots contain World War II, Post-World War II, or Anti-Semitic themes have a powerful effect on viewers. Viewers have a tendency to be emotionally moved by those movies. The themes of faith, hardships and suicide paint a realistic portrait of life.

Of course, all of these things are due to great writing, directing, and producing from the crew working behind the camera and in the editing room.

All in all, IDA is a powerful movie with a positive Christian and moral worldview that will greatly touch and move its audience. The audience will walk away knowing that Christian faith overcomes hardships. That said, strong caution is recommended for IDA due to some implied sex and foul language.