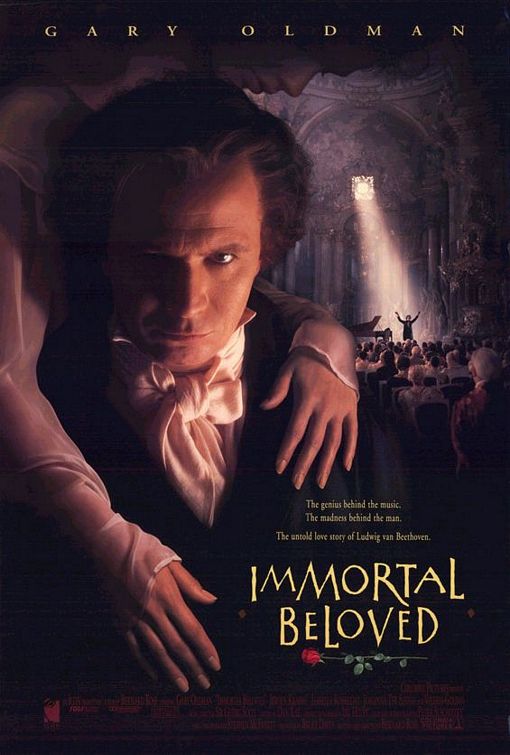 IMMORTAL BELOVED is an elaborate and sometimes silly revisionist film biography about Beethoven from the unflattering perspective of the three women who figured prominently in his life. Richly filmed with period clothing and sets, the movie unfortunately connects Beethoven's musical sensualism with several gratuitous sex scenes.

IMMORTAL BELOVED is another elaborate and sometimes silly revisionist film biography about a genius, whose greatness compensates for his nastiness. When Beethoven dies in 1827, his secretary finds a will that leaves all of Beethoven’s belongings to his unidentified “immortal beloved.” To track down the “immortal beloved,” his secretary interrogates the three women who figured prominently in Beethoven’s life. Each sketches a unflattering portrait of the great composer. Beethoven suffered at the hands of an alcoholic father who wanted Beethoven to be a child prodigy. Ludwig debuted professionally at age 12. At age 17, his mother died. By 18, he was the sole breadwinner of the family. Two ladies spurn his marriage proposals, so he remains a bachelor until his death. By age 28, Ludwig faces progressive deafness. After winning custody of his bastard son, Ludwig attempts to turn the boy into a prodigy, but is foiled by the boy’s lack of talent and rebelliousness. Devastated, Ludwig composes Symphony No. 9 (Ode to Joy), written when he is totally deaf.

Richly filmed with period clothing and sets, the movie unfortunately connects Beethoven’s musical sensualism with several gratuitous sex scenes. The film is a dramatic portrayal of how in our search for unfailing love, we can often use our hurt and pain to produce beauty.