"A Battle for Christmas" 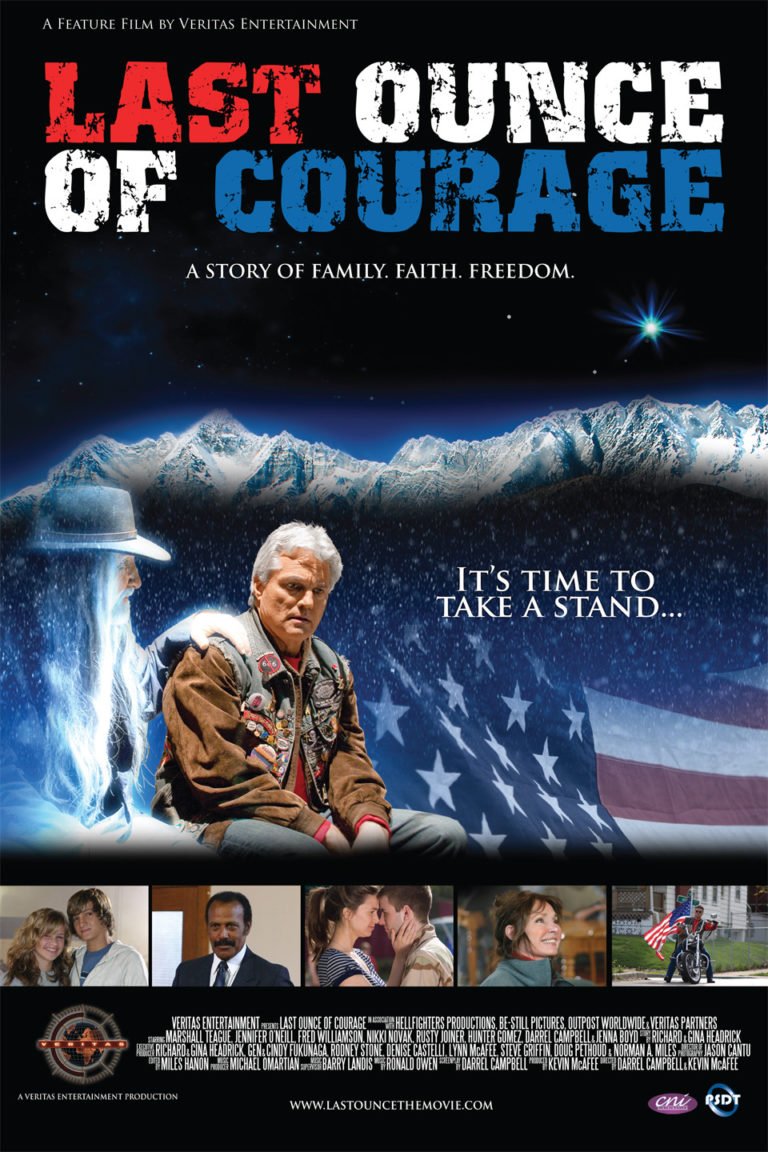 LAST OUNCE OF COURAGE tells the story of Bob, a decorated war veteran and mayor of a small mountain town. Bob reconnects with his grandson, Chris, when Chris moves back into town. Chris tries to connect with memories of his father, who died in the war. Meanwhile, first Bob and then the whole town become involved in trying to restore Christmas, which has been forbidden. However, they must face the wrath of the ACLU. Bob is thrown in jail and stripped of his office. Only a miracle can bring Christmas back to this small town.

LAST OUNCE OF COURAGE dramatically tells an important story. It ends on a spiritual, heart-rending, patriotic, life-changing note. Some of the acting is superb. The movie elicits real tears and real conviction. It has a clear evangelistic, patriotic, Christian storyline. The beginning tells an important back-story, so the drama doesn’t start until about a third of the way into the story. Once the jeopardy and battle over Christmas kick in, however, LAST OUNCE OF COURAGE is completely captivating.

(CCC, BBB, V, A, M) Very strong Christian, biblical worldview about a mayor and his family who are standing up for Christmas against the forces of the ACLU; no foul language; bloody wound on motorcyclist, war footage with soldier dying, perilous situations; no sexual immorality; no nudity; some alcohol use; no smoking or drugs; and, politically correct ACLU and anti-Christian friends intimidate, lie and bully.

The movie opens with a dramatic quote from President Ronald Reagan, calling for everyone to teach their children about American values and freedom. Thomas Revere getting married to his beloved just before he goes off to fight in Iraq. His father Bob is a decorated veteran and mayor. While Thomas fights for America, his son Chris is born. Soon thereafter, the officers show up at the Revere house to say that Thomas had died.

Years later, Chris and his mother come back to visit, but times have changed. The people can no longer celebrate Christmas in the high school or have Christmas decorations in the town. As Chris tries to connect with the memories of his father, first Bob and then the whole town become involved in trying to restore the celebration of Christmas. They are facing the wrath of the ACLU-like organization. Bob is thrown in jail and stripped of his political office. A young friend of Chris decides to turn the winter play into a Christmas play. Only a miracle can bring Christmas and real freedom back to this small mountain town.

LAST OUNCE OF COURAGE ends on several positive notes that make it recommended viewing for everyone. The quality of acting by some of our favorite actors is superb, although some of the other acting is spotty. That said, Jennifer O’Neill, Fred Williamson, and Marshall Teague do a wonderful job. Many of them have participated in the MOVIEGUIDE® Awards. The movie elicits real tears and real conviction. It has a clear evangelistic, patriotic storyline.

The real drama doesn’t start until about a third of the way into the story. Once the jeopardy and battle over Christmas kick in, however, the movie is captivating, even with the multiple endings and resolutions.