LEFT BEHIND: RISE OF THE ANTICHRIST

"You Make the Decision" 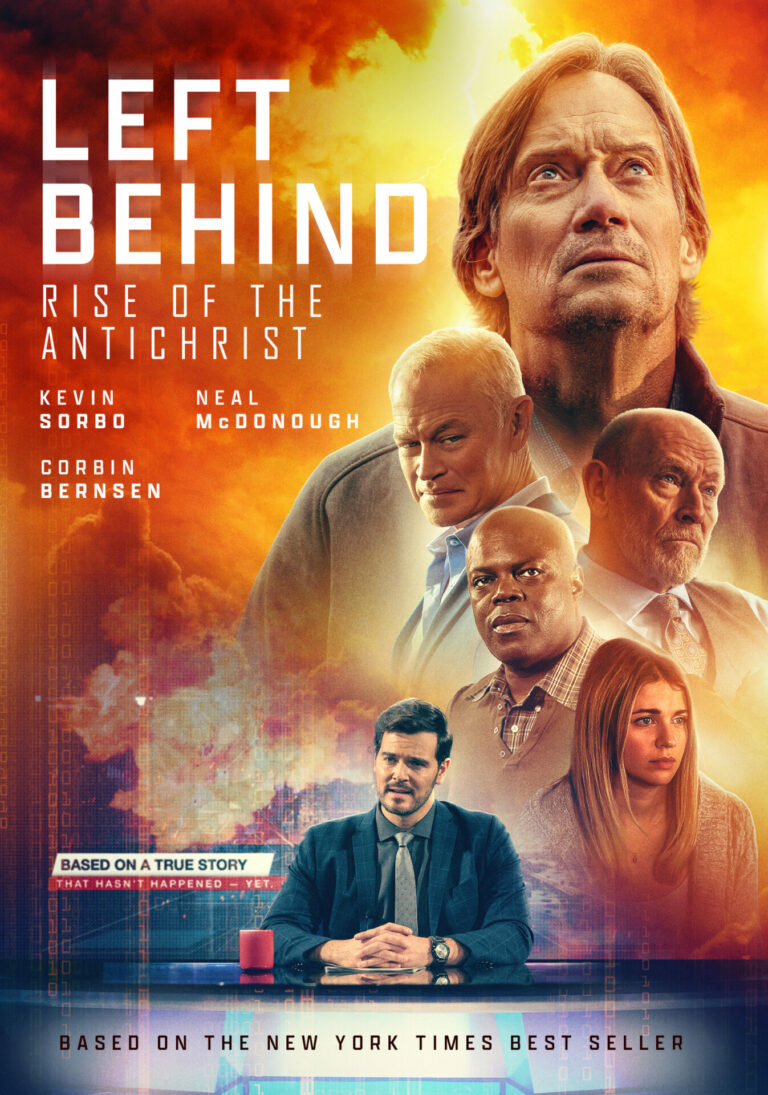 The opening scenes of LEFT BEHIND: RISE OF THE ANTICHRIST display the fear, panic and unnatural disasters that result from the sudden, mysterious disappearance of millions of people across the globe. Network news anchor Buck Williams not only reports the resulting stories but uses his investigative skills to get to the truth. Is it aliens, some kind of STAR TREK technology, or a hoax. Meanwhile, airline pilot Rayford Steele is at home with his daughter Chloe as they grieve the disappearances of Rayford's wife and son. Steele turns to the church for answers. The characters will journey to a moment of decision about God’s role in these events and in their lives going forward.

Convincing acting, good camera work and fittingly dark indoor sets provide the right feel for the current dark times the world is facing today. LEFT BEHIND: RISE OF THE ANTICHRIST has a strong pre-millennial Christian worldview. The villains are scary. They espouse an immoral, whatever-it-takes attitude toward power and control. MOVIEGUIDE® advises caution for younger children because of the debatable theological issues and two violent murder scenes.

(CCC, Pa, Ab, V, S, A):
Dominant Worldview and Other Worldview Content/Elements:
Very strong pre-millennial worldview where Scripture is quoted, people pray about matters of faith as well as doubt are respectfully discussed, with an opposing, pagan worldview portrayed, espousing a power-hungry, whatever-it-takes attitude toward work (at the news network boss’ office or with the social media company’s head) and government (at the one-world start-up meetings);
Foul Language:
No foul language;
Violence:
One scene shows a double murder with a pistol in a high-level world leadership meeting and another scene portrays a car bombing that kills a person;
Sex:
A touch of sexual immorality arises once as a female friend comes calling at the home of airline pilot Rayford, hinting at a past affair, as well as inviting him to dive back in with her to serve the leader of the new world order;
Nudity:
No nudity;
Alcohol Use:
News network boss pours himself a drink during a tense in-office conversation;
Smoking and/or Drug Use and Abuse:
No smoking or drugs; and,
Miscellaneous Immorality:
Nothing else objectionable.

The opening scenes of LEFT BEHIND: RISE OF THE ANTICHRIST display the fear, panic, chaos, and unnatural disasters that result from the sudden, mysterious disappearance of millions of people across the globe. American citizens are instructed to stay at home as shutdowns are needed to restore order from the chaos and told not to question the wisdom and instructions of the authorities in the recovery from this “pandemic of evil,” an intentional poke at COVID-19 protocols.

The movie follows two emergent storylines. First, network news anchor Buck Williams not only reports the resulting news stories but reignites his investigative skills to get to the bottom of this planetary disappearance and the motives behind the solutions emerging from world leaders. Meanwhile, from a more personal perspective of this tragic, mysterious event, now-grounded airline pilot Rayford Steele is at home with his daughter Chloe as they grieve the disappearances of Rayford’s wife and son. Compounding their emotions of loss is the reality that Rayford’s wife had informed them about the sudden disappearance event ahead of time, but they didn’t heed the warnings.

Buck reports various theories explaining the vanishings, namely UFO kidnappings on a mass scale; the nefarious use of STAR TREK style transporter technology to take people hostage; consideration of the remaining presence of many self-identifying Christians pointing to a planned hoax fulfilling biblical prophecy of “a delusion at the last times.” No matter the cause, Buck is fixated on the people planning to take advantage of the global crisis by organizing a one-world government and sole electronic currency to “face it together as one, united people.” They want to transform Earth’s future from a “tribal to a united human race.”

Meanwhile, Rayford repentantly takes the warnings his wife had shared through her knowledge of the Bible and seeks out a church pastor to explore the implications of the disappearances. Rayford finds that one of the pastors of his wife’s church had also disappeared, but one remained. Together, Rayford and the remaining pastor admit that they believe that they have witnessed “the Rapture,” an event sparsely suggested by the Apostle Paul in the Bible’s New Testament, and an event neither men believed in previously. Both men end up on their knees praying the sinners’ prayer and dedicating their lives to Jesus Christ. Buck Williams will eventually do the same through their influence, then participate with them in an airlift of tracts over a major city inviting others to do the same.

Is there any movie adaptation of one particular book that has had three different productions, one in each of three consecutive decades, other than LEFT BEHIND? LEFT BEHIND: RISE OF THE ANTICHRIST is this decade’s contribution to bringing to the big screen of what this 2023 movie’s poster proclaims as “based on a true story. . . that hasn’t happened. . . yet.” When considering that actors as well-known as Kirk Cameron and Nicolas Cage played the lead role of airline pilot Rayford Steele in the 2000 and 2014 entries respectively, a few of the targeted viewers may recall those movie experiences. Kevin Sorbo’s lead-actor contribution to this present decade’s entry will accomplish a similar effect, bolstered by the animated performance of actor Greg Perrow in the other lead role, that of news reporter Buck Williams. Convincing acting, great camera work and fittingly dark indoor sets provide the right feel for this dark time for the world. The script is very wordy, however, and the storyline is heavily dialog-driven, yet purposefully so as it gives thorough voice to the hearts and minds of the characters. One example is the numerous times characters offer their prior and/or present reasons that they haven’t made a commitment to the Lord. These turn into conversations that explore pros and cons that can give skeptical viewers food for thought.

LEFT BEHIND: RISE OF THE ANTICHRIST has a strong pre-millennial worldview. Scripture is quoted, people pray and matters of faith, as well as doubt, are respectfully discussed. An opposing, pagan worldview is portrayed, espousing a power-hungry, whatever-it-takes attitude toward work (at the news network boss’ office or with the social media company’s head) and government (at the one-world start-up meetings). Older viewers may appreciate the dialogue more than younger ones.

MOVIEGUIDE® advises caution for younger children, particularly for a cold-blooded murder and a bomb that kills a character. Also, some will debate the theological issues involved.