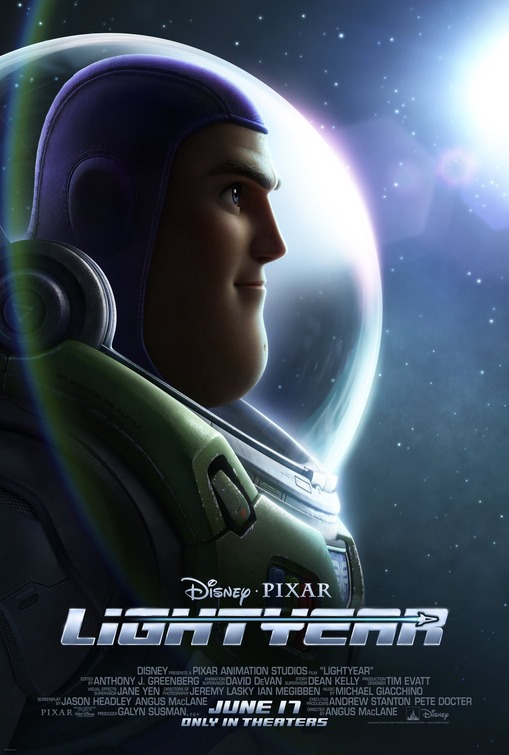 LIGHTYEAR is an animated science fiction feature that’s supposed to be the movie on which the Buzz Lightyear action figure was based. Andy, the little boy in TOY STORY, loved the Buzz Lightyear action figure because LIGHTYEAR became his favorite movie. In the story, Buzz is a Space Ranger who accidentally destroys a spaceship’s hyperspace crystal, stranding him and other Rangers on an inhospitable planet. Buzz spends decades testing new crystals. He doesn’t age, but his friends do. When he perfects the crystal, he returns to find an army of ruthless robots have landed and want to take the crystal.

LIGHTYEAR constantly places obstacles in Buzz’s way. The obstacles make an exciting story. However, Buzz isn’t really the hero of this story. His lesbian friend, Alisha, is the real hero. Eventually, it’s her life that inspires Buzz, her granddaughter and everyone else. Thus, the whole movie becomes a validation of LGBT ideology and an attack on masculinity and the biblical view of family. LIGHTYEAR also taints the TOY STORY franchise, because it says the politically correct movie became Andy’s favorite movie.

(RoRo, PCPCPC, HoHoHo, FeFeFe, VV, M):
Dominant Worldview and Other Worldview Content/Elements:
A very strong politically correct, homosexual, feminist worldview that also seems anti-male;
Foul Language:
No obscenities or profanities, but there is a light joke about passing gas;
Violence:
Lots of action violence, sometimes with large scary bugs and large scary robots, such as bugs swarm and chase people, large vines grab people and try to grab people, large vines try to pull large spaceship into the ground, large spaceship hits the very tip of a mountain and then crash lands, large robots chase and fire at people, man shoots large harpoon arrows at large robot finally hits it, heroes tear of robot’s arm, people take falls and are knocked unconscious, explosions;
Sex:
No sex scenes, but woman marries another woman and briefly kisses the other woman in one scene, then gets pregnant, presumably by artificial insemination, though the movie doesn’t say;
Nudity:
No nudity;
Alcohol Use:
No alcohol use;
Smoking and/or Drug Use and Abuse:
No smoking or drugs; and,
Miscellaneous Immorality:
Title character steals a small spaceship.

In LIGHTYEAR, Pixar goes fully woke in its new TOY STORY movie that’s supposed to be the movie that launched the Buzz Lightyear toy, where the movie features Buzz Lightyear as a Space Ranger who tries to fix an error he made that stranded he and his fellow Ranger buddies on an inhospitable planet. The real hero in LIGHTYEAR isn’t Buzz, but is actually his lesbian friend, Alisha, who becomes an inspiration for Buzz and for Buzz’s new friend, Alisha’s granddaughter, a plot that promotes the LGBT, anti-male, feminist ideology.

The movie opens with Buzz and his friend, Alisha Hawthorne, landing on a strange planet. Alisha forces Buzz to take along a rookie Space Ranger with them, even though Buzz hates working with rookies. Their spaceship is filled with Space Rangers who are in suspended animation.

On the planet, the three Rangers encounter a system of underground vines that grab any living thing walking on the planet’s surface. The planet also has hordes of attacking flesh-eating bugs.

With the rookie in tow, Buzz and Alisha rush to their spaceship. With Buzz at the helm, the spaceship starts to speed away. However, a steep mountain gets in the way, and Buzz fails to clear the peak completely, and the spaceship crash lands.

Regrettably, during the crash, the spaceship’s hyperspace crystal was destroyed, so the large ship is stuck on the planet. The Space Rangers make do and eventually construct an experimental ship and a new crystal. Despite his mistake, Buzz is the best pilot, so he’s assigned to take the ship into space to achieve 100% hyperspace power.

However, Buzz fails to achieve 100% power. He returns to the planet only to find that, because he was flying at nearly the speed of light, everyone, including Alisha, has aged four years. Alisha greets Buzz on his return and informs him she’s gotten engaged. Buzz immediately asks Alisha who’s the lucky woman, and Alysha tells him her name. Later, when he enters his room, he finds that Alisha has given him a robot cat companion named Sox.

Buzz and Sox keep trying to fly ships into space to achieve 100% hyperspace power. And, they keep returning to the planet to find the people are much older until Alisha finally dies, leaving behind a granddaughter named Izzy.

However, 62 years later, Sox discovers the right formula to reach full hyperspace power. When the new commander tells Buzz they’ve decided not to try any more test, Buzz steals a ship and finally achieves full hyperspace power. However, Buzz and Sox return to find that the planet has been invaded by an army of ruthless robots controlled by Zurg, who’s trying to steal the hyperspace crystal.

LIGHTYEAR constantly places obstacles in Buzz’s way. Some of the obstacles are of Buzz’s own making, such as his aversion to rookies and the guilt that haunts him because he made the mistake that stranded the Space Rangers. The obstacles make for an exciting story.

However, unlike the other redemptive movies in Pixar’s TOY STORY franchise, inspiring entertainment is not the sole goal in LIGHTYEAR. Instead, the whole movie is held captive by a contentious agenda of politically correct politics. To whit, the whole movie is centered on an LGBT, radical feminist, anti-male ideology. In fact, Buzz Lightyear isn’t really the hero in the movie. The movie’s real hero is Buzz’s female friend, a lesbian, who marries another woman and becomes pregnant, presumably by artificial insemination. Together, the two women raise a son, who marries a woman and has a daughter. During this whole story, there’s no mention of a grandfather. Instead, Izzy, the granddaughter, mentions at one point that she has two grandmothers. To top it off, there are no references to Izzy’s father, including no scenes of her interacting with her father. Thus, the movie’s whole story seems to be a politically correct validation of LGBT ideology, including an attack on masculinity and the traditional nuclear family.