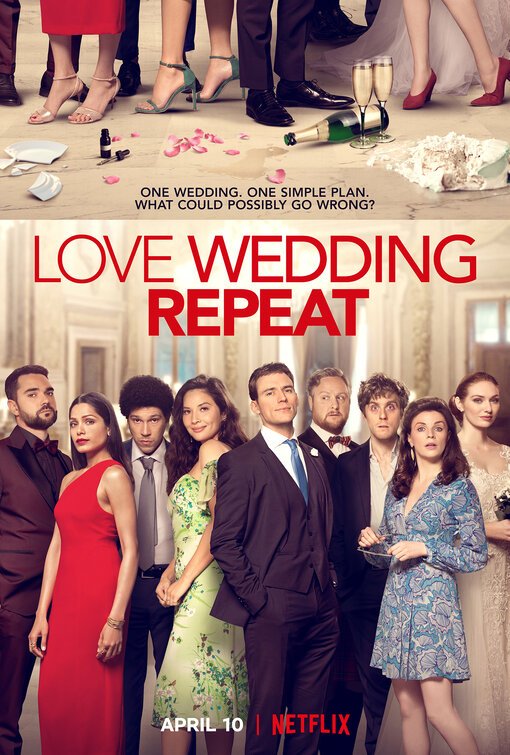 LOVE. WEDDING. REPEAT is a romantic comedy on Netflix, that has very funny points, but is marred by crude jokes and foul language. Jack has been interested in Dina for years. When his sister, Haley’s, wedding comes around three years later, he will finally see Dina again. The only problem is, Haley has an uninvited guest at her wedding who wants to destroy it. Jack must help Haley solve this problem and still find time to talk with Dina. The plan to get rid of the guest hits a big snafu, resulting in some comical chaos. This chaos puts Jack’s efforts to woo Dina in jeopardy.

Some parts of LOVE. WEDDING. REPEAT are extremely funny, but some parts are over the top and thus unbelievable. Also, the script has some plot holes and a lack of jeopardy in the third act. The movie has a light moral worldview about family staying by each other’s side, loving people despite their flaws and doing the right thing. Sadly, however, LOVE. WEDDING. REPEAT is marred by some crude jokes and lots of gratuitous foul language.

(B, Ro, Ab, Ho, LLL, V, S, A, DD, M):
Dominant Worldview and Other Worldview Content/Elements:
Light moral worldview stresses doing the right thing rather than following your heart, family sticks together and loves each other, and some pro-life elements stress the idea that each of us are put on this earth to do good and be happy, but there’s no mention of the God’s Kingdom, plus one character cheats on someone, and it’s brushed over, and there’s a crude homosexual joke
Foul Language:
47 obscenities (about 31 “f” words), three Jesus profanities, and eight light profanities
Violence:
Man is hit in the nose
Sex:
Implied sex outside of marriage, man mentions his private parts, and how well he is in bed several times, a crude homosexual joke, and some kissing
Nudity:
No nudity Alcohol: Alcohol use
Smoking and/or Drug Use and Abuse:
No smoking, but one character does drugs and is the villain so it is seen as bad but still not acceptable, and characters are drugged with sleeping medicine; and,
Miscellaneous Immorality:
Lying.

LOVE. WEDDING. REPEAT is a British romantic comedy that has some very funny moments, but it’s marred by crude jokes, lots of foul language, some plot holes, and a lack of jeopardy at the end.

The movie opens with Jack spending time with Dina, his sister’s friend, while on vacation in Rome. When he has the opportunity to take a leap of faith and kiss Dina, circumstances get in the way.

Three years later, Jack is at his sister, Haley’s, wedding, and he sees Dina. Instantly they have a connection, but Haley has a problem. A man named Marc has come to the wedding to win Haley back, so Haley asks for Jack’s help to stop Marc. They decide to put some sleeping medicine in Marc’s cup, so he will fall asleep. However, the cups get switched around, and Haley’s maid of honor accidently drinks the sleeping medicine and falls asleep. Will they still be able to stop Marc from destroying the wedding? Will Jack be able to talk to Dina and win her love?

Streaming on Netflix, LOVE. WEDDING. REPEAT has a light moral worldview about family staying by each other’s side and loving people despite their flaws. The movie also says people should do the right thing, even if it’s not what they want. In spite of all this, the movie has an excessive amount of strong foul language and some crude jokes.

Some of the comedy in LOVE. WEDDING. REPEAT is extremely funny, but some of it is over the top and thus unbelievable. Also, there are some plot holes, and the drama about the uninvited guest doesn’t make sense because, in reality, such a person would have been kicked out of the wedding. Finally, an hour into the movie all the jeopardy suddenly ends, and the movie takes the last 30 minutes to wrap up while delivering a sentimental ending with little conflict and comedy. In spite of this, the movie contains some very funny British humor that some viewers may appreciate.