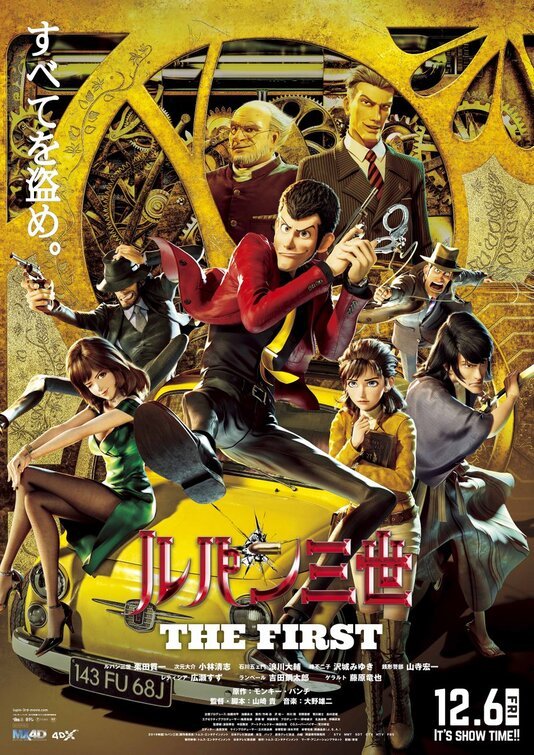 Set in the 1960s, LUPIN III: THE FIRST is the latest in a long-running, Japanese movie and comic book series. Lupin, the mixed-race grandson of a French thief, tries to steal a valuable locked diary of an archeologist murdered by the Nazis during World War II. The diary reveals the secret location of a powerful energy device. However, a group of Nazis want the device to recreate Hitler’s Third Reich. So, Lupin teams up with the archeologist’s granddaughter to find the device and destroy it.

LUPIN III: THE FIRST is spectacularly animated and exciting, but derivative of Indiana Jones movies. Although its hero is a thief, it follows in the tradition of other Lupin movies, where Lupin ends up helping a victim or stopping a more ruthless criminal. Here, Lupin must prevent the villains from getting their hands on a powerful device to use as a weapon. Also, Lupin doesn’t want to use the device for his own selfish ends but to destroy it. That said, LUPIN III has some foul language and action violence. So, MOVIEGUIDE® advises caution for older children.

(BB, ACAC, C, Pa, L, VV, A, D, M):
Dominant Worldview and Other Worldview Content/Elements:
Strong moral, anti-totalitarian worldview where the “good guys” are trying to stop a group of evil Nazis from getting their hands on a powerful energy device and weaponizing it to rule the world, and a redemptive act of sacrifice, but the main hero is an international thief who likes to steal, mostly for the thrill of it
Foul Language:
Six obscenities (“d” words and two bastard words)
Violence:
Strong cartoon action violence, with gunplay, gunfights, fighting, people are shot or knocked out, explosions large and small, derring-do, spectacular leaps and falls, woman thrown out of a plane and a man jumps out after her but they’re saved by a biplane coming under them, two characters hang on for dear life on the upper wing of a biplane, a large rock ceiling falls onto the Nazi villain’s henchmen, a henchman is vaporized and only part of his rifle remains, a gunshot is heard and implies that a man has been murdered in cold blood, etc.
Sex:
No sex
Nudity:
No nudity
Alcohol Use:
No alcohol use
Smoking and/or Drug Use and Abuse:
Smoking but no drugs; and,
Miscellaneous Immorality:
A major subplot involves stealing and lying.

Arsene Lupin III is the part Japanese grandson of the famous French “gentleman thief” created by novelist Maurice LeBlanc in the early 1900s and featured in 17 novels and 39 novellas. In 1967, the late Japanese comic book writer Kazuhiko Katô, under the pen name Monkey Punch, began a series of highly successful Japanese comic books or graphic novels (called manga in Japan) about the grandson of the fictional French thief. Despite being the greatest thief in the world, Lupin III often ends up in the movies applying his skills to stop crazed villains or to help their victims. From the very start, Lupin III stories became so popular in Japan that they soon were made into TV series, many feature-length animated movies, and a few live action movies. Perhaps the most famous of the animated movies is the 1979 movie THE CASTLE OF CAGLIOSTRO, written by Monkey Punch and directed by acclaimed Japanese animator Hayao Miyazaki. The movie began making the rounds in the United States in the early 1980s at science fiction conventions. Miyasaki’s CASTLE OF CAGLIOSTRO became a revelation to many people who saw it then, who were impressed with the movie’s very entertaining action scenes and joyful humor. People started to look at feature-length cartoons as not being limited to just slapstick comedy and fairy tale creatures. It can safely be argued that, were it not for this movie and its success, Pixar’s wonderful animated superhero movie THE INCREDIBLES might not have been made the way it was made, or even made at all.

LUPIN III: THE FIRST is the thirty-second or thirty-third Lupin III movie, depending on how you count, and the first one to be animated using computers rather than traditional hand-drawn animation. In the story, Lupin is after a treasure book designed by a famous archeologist who was murdered during World War II in France by Nazi agents wanting the book. Before being killed, the archeologist gave the book and a round amulet holding a key to unlock the booby-trapped book to his daughter, her husband and their baby daughter. However, the parents die in a car crash while being chased by a Nazi archeologist named Lambert. Lambert finds the amulet with the key around the baby’s neck, but the book is lost in the crash.

In the 1960s, the book resurfaces in a new museum exhibition, which calls the book the Bresson Diary, after the name of the man who created it. Lupin tries to steal the book, but he’s beaten to the punch by his arch rival, a mercenary female thief named Fujiko. Also trying to steal the book is a young woman named Laetitia, who is the granddaughter of Bresson, even though she doesn’t know it. She’s trying to steal the book for her adopted “grandfather,” who just happens to be Lambert, the archeologist working for the Nazi group that murdered her real grandfather. She doesn’t know, however, about Lambert’s Nazi affiliations. Lambert has promised Laetitia he’ll help her get into a prestigious archeology school in Boston if she helps him. A quick flashback later in the movie shows Lambert picking up Laetitia from an orphanage where she was placed after her parents died.

It turns out Lupin’s rival Fujiko stole the Bresson Diary to sell it to Lambert and the group of former Nazis with whom he works. The diary is rumored to contain the secret location of a powerful energy device created by an advanced ancient civilization. Gerard, the head of the Nazi group, doesn’t trust Fujiko, however. So, he has her imprisoned in their hideout. While trying to open the diary with the key that he stole from Laetitia’s dead parents, Lambert discovers the diary actually has a second key that must be used with the first to open the diary, but where is the second key?

Meanwhile, Lupin has been captured at the museum by Inspector Zenigata, the Interpol detective who’s always after him. However, he’s freed from a police van by his two longtime cohorts. Jigen, Lupin’s best friend, is an expert Japanese marksman and former gangster raised in New York, while Gaemon, a man in samurai dress wielding a specially made, impervious sword, is the descendent of a legendary 16th Century renegade samurai who stole from the rich to give to the poor.

At the museum, Lupin managed to place a tracker device on Laetitia’s shoe. He shows up at her apartment and shows her that his grandfather had given him a second amulet holding the second key to the Bresson Diary. Apparently, his grandfather was Bresson’s secret partner.

Unknown to Lupin, Laetitia phones Lambert and tells him about the second key. He orders her to lead Lupin to the large transport plane that he and his friends will be using to fly to the secret location of the ancient energy device. She agrees.

Lupin and Laetitia sneak onto the plane, where Lupin uses his talent as a thief to open the booby-trapped diary with the two keys. By reading part of the book, they discover that the energy device is hidden in some ancient Mexican ruins. However, at that moment, Lambert and Gerard burst in on them, taking Lupin prisoner.

They place Lupin in a large cell with Fujiko, but the two thieves use their skills to escape. Lupin sneaks back onto the transport plane and overhears Lambert and Gerard discussing their plan to locate none other than Adolf Hitler himself, who reportedly escaped to Brazil. They plan to find the energy device and use it to resurrect the Third Reich. Laetitia also overhears them. So, she teams up with Lupin to foil their plan by destroying the energy device.

Lupin manages to snatch the diary out from under Lambert and Gerard’s nose. Laetitia, Lupin and his two friends must now beat them to the Mexican ruins to get past some deadly traps and destroy the device to prevent the two Nazis from getting their hands on it.

The computer animation in LUPIN III: THE FIRST is spectacular. It also manages to transfer perfectly the unique hand-drawn look of the Lupin characters into the computerized style of today’s state-of-the-art computer animation. The movie’s jazz score provides a great backdrop. Though a little complicated, the story itself is pretty entertaining. Also, the stakes are fairly high, saving the whole world from a new Nazi menace. However, the plot is a bit too predictable and derivative of the Indiana Jones movies, which we’ve seen many times before this. That said, the movie still has the typical James Bond tone of other Lupin III movies. Of course, George Lucas once said that he envisioned the Indiana Jones movies to have a James Bond feel to them, but set in an earlier time.

Although its hero is a thief, LUPIN III: THE FIRST follows in the tradition of other Lupin movies, where Lupin finds himself helping a victim and/or stopping a more ruthless criminal. Reportedly, his character in the comic books is more ruthless and more crude and lewd. However, in both the movies and the comic books, it’s more the pursuit of the treasure than the treasure itself that’s important to him. Ultimately, therefore, LUPIN III: THE FIRST has a moral worldview where the movie’s heroic thief must stop the evil would-be tyrants from getting their hands on a powerful device which they want to use as a weapon to rule the world. Also, the hero doesn’t want to use the device for his own selfish ends but to destroy it. LUPIN III does have some brief foul language and action violence, though. So, MOVIEGUIDE® advises caution for older children.