"Strangers at the Altar" 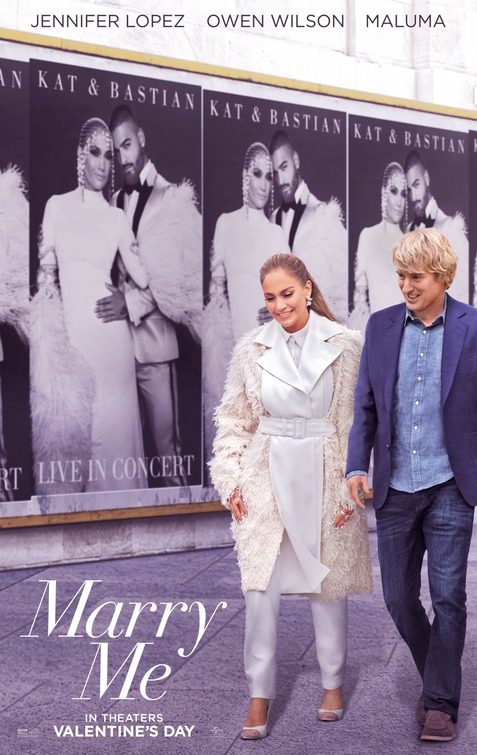 MARRY ME is a romantic comedy starring Jennifer Lopez and Owen Wilson. Kat is an international pop star. When she’s left at the altar, she impulsively marries a man in the audience named Charlie. They decide to spend time with each other to get to know one another, but also to help Kat’s publicity. Kat finds out Charlie doesn’t like fame and social media, and values family and the simple life. Will the two of them get along and truly commit to each other?

MARRY ME has some comical moments, but the plot is far-fetched. Also, the movie doesn’t have much jeopardy, and Jennifer Lopez and Owen Wilson lack chemistry. MARRY ME has a strong Romantic worldview stressing following your heart, with little emphasis on commitment. The movie does show some positive Christian, moral elements. For example, the movie says love and family matter more than fame and fortune. Also, there’s a light mention of prayer and a reference to taking a leap of faith. However, MARRY ME has several strong profanities, some blasphemous images and references to same-sex couples. MOVIEGUIDE® advises extreme caution.

(RoRo, C, Ab, FR, Ho, B, LL, S, N, A) :
Dominant Worldview and Other Worldview Content/Elements:
Strong Romantic worldview stresses following your heart, with some brief Christian elements such as a light mention of prayer and a reference to taking a leap of faith, plus a blasphemous scene where a character dances in a very revealing outfit in the shape of a cross with dancers in a nun outfit and sings about sex as a metaphor, light references to yoga, and movie mentions multiple couples being in same-sex relationships, but movie stresses family over fame, and lead male character is humble and a loving father
Foul Language:
Six obscenities, five Jesus profanities and one light profanity
Violence:
No violence
Sex:
Implied sex technically within marriage, and the move mentions multiple couples being in same-sex relationships
Nudity:
Upper male nudity
Alcohol Use:
Light alcohol use
Smoking and/or Drug Use and Abuse:
No smoking or drugs; and,
Miscellaneous Immorality:
Nothing else objectionable.

MARRY ME stars Jennifer Lopez and Owen Wilson in a romantic comedy about an international pop star who impulsively marries a man in the audience when she’s left at the altar. MARRY ME has some funny moments, but the romantic leads lack chemistry, the plot is a bit far-fetched and needs more jeopardy, and the movie’s positive Christian, moral content is marred by brief foul language, some blasphemous images and a strong Romantic, non-Christian worldview about following your heart.

Kat and Bastion were planning on getting married in front of millions of people at one of their concerts. They both wrote the song “Marry Me” and decide that, while performing their song, they would do a wedding. After Kat gets on her wedding dress and is walking to perform the song, she discovers that Bastion cheated on her with her assistant. On stage, Kat impulsively decides to marry a man in the audience, Charlie.

The next day, Kat and her manager come up with a plan that Kat should get to know Charlie and it would be good for the story line that they have created and for marketing. The only thing is, Charlie is a dedicated middle school math teacher who has a flip phone, no social media and doesn’t care about fame.

Charlie decides to agree to getting to know Kat and do some press conferences to help her out. It doesn’t take long for Kat to realize that Charlie is a good guy who’s humble and has a good heart. The question is, will Charlie be able to get uses to the glitz and glam of Kt’s life, or will he shy away?

MARRY ME has some comical moments, but the plot is far-fetched. Also, the movie doesn’t have much jeopardy or drama, which makes it lags in some spots. Also, no matter how fabulous Jennifer Lopez is, Owen Wilson and she are not a truly believable pair.

MARRY ME has a strong Romantic worldview stressing following your heart, with very little emphasis on commitment. Many of the characters have been married multiple times and then got married on a whim. The movie does show some positive Christian, moral elements. For example, Charlie is a humble man and a loving father and has his priorities straight. The movie tries to show that fame and fortune don’t matter, but that what matters most is love and family. Also, MARRY ME has a light mention of prayer and a reference to taking a leap of faith. However, the movie also mentions multiple couples being in same-sex relationships. Also, one of the movie’s songs is a metaphor for sex and compares sex to going to church, which is blasphemous in itself.