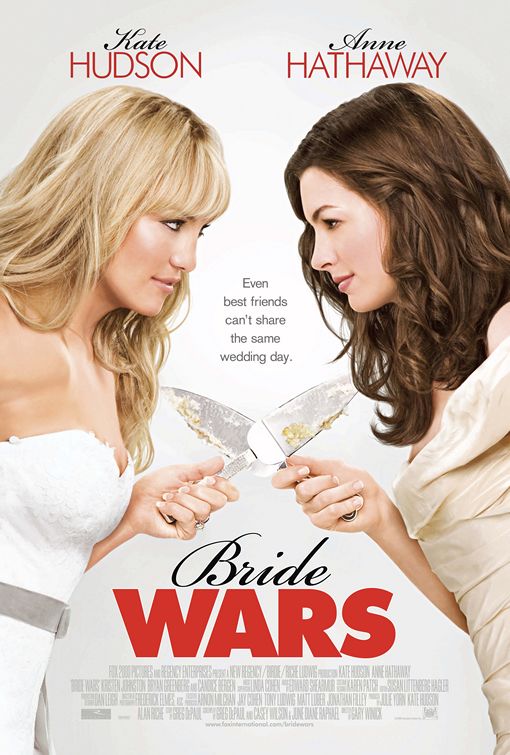 BRIDE WARS is a comedy starring Kate Hudson and Anne Hathaway. Liv and Emma are lifelong friends who dream of the day when both can get married at the Plaza Hotel in New York. When they get engaged at the same time, they head for their favorite wedding coordinator, a Martha Stewart clone. The coordinator sets their wedding dates for June 6 and 27, but her secretary goofs up, setting both weddings for June 6. When they can’t get the bride who took June 27 to change her date, Liv and Emma’s friendship is put to the test. Let the BRIDE WARS begin!

BRIDE WARS has very funny moments, including scenes where Liv and Emma try to sabotage each other’s wedding. Hudson and Hathaway are well cast, and the story moves briskly. It’s hard to sympathize, however, with these wedding mavens, especially when they turn nasty. Also, the movie contains many light profanities and some obscenities requiring extreme caution. There are no sex scenes, but there is a bachelorette party with male dancers. Finally, Emma lives with her boyfriend. Despite these problems, the heartwarming ending BRIDE WARS extols friendship, repentance and forgiveness.

(C, B, Pa, LLL, V, S, N, AA, MM) Light redemptive worldview ultimately extolling friendship, repentance and forgiveness, with some mixed pagan problem areas; six or seven mostly light obscenities, one strong profanity (GD) and 35 light profanities (e.g., My God! or God!); light comic violence such as a funny fight scene; no sex scenes but nightclub scene at bachelorette party has male dancers with short shorts strutting, unmarried couple lives together, brief video shown of drunken woman with young men in bar during spring break and woman gets up on table to dance, and unmarried man is sleeping next to his live-in girlfriend who’s awake and in a pensive mood thinking about problems in her life; upper male nudity with male dancers in short shorts and some female cleavage; alcohol use and drunkenness; no smoking; and, revenge, lying, women sabotage one another’s weddings, engaged couple have argument, and friends fight, though story implicitly rebukes some of the immoral behavior and extols repentance and forgiveness.

BRIDE WARS is a funny, but not great, comedy with some problem areas requiring extreme caution for moviegoers.

Liv and Emma, played by Kate Hudson and Anne Hathaway, respectively, are lifelong friends who dream of the day when both can get married at the Plaza Hotel in New York City.

Liv finds out that her boyfriend, Daniel, has bought her an engagement ring, but it’s actually Emma who gets asked first by her boyfriend, Fletcher. When that happens, Liv is too anxious to wait another second, so she storms into Daniel’s workplace, demanding to know if he’s going to propose. Of course, he was going to ask her that very night, he says.

Naturally, both Liv and Emma approach their favorite wedding coordinator, Marion St. Clair, a Martha Stewart clone played by Candace Bergen. Marion sets their dates for June 6 and 27, but her secretary goofs up the dates, and sets both weddings for June 6. Liv and Emma force the secretary, who has been fired, to give them the name of the bride who took June 27, but the bride refuses to change her wedding date.

Liv and Emma’s friendship is put to the test. Let the BRIDE WARS begin!

BRIDE WARS has some very funny moments, including scenes where Liv and Emma try to sabotage each other’s wedding. Hudson and Hathaway are well cast, and the story moves along at a brisk place.

It’s hard to sympathize, however, with these wedding mavens, especially when their characters turn nasty. The movie does not capitalize on the pain that the two Bridezillas create for those around them.

Also, the movie contains many light profanities (mostly “My God”) and some obscenities that require extreme caution. There are no sex scenes, but there is a bachelorette party at a club with male dancers in short shorts. Also, it is clear that Emma lives with her boyfriend. There are scenes of them together in their own apartment. There are no scenes like that between Liv and her boyfriend, however, so it is unclear about them. Even so, the movie gave the impression that Liv finds the ring hidden at her apartment, indicating vaguely that she and Daniel also live together.

Despite its problems, BRIDE WARS ultimately has a positive, heartwarming tone that extols friendship, repentance and forgiveness, especially at the end. Liv and Emma learn that repentance and forgiveness are part of creating a more mature friendship, one that will last. Each woman also learns that the good character traits of the other friend can help her overcome her own bad character traits. Thus, Liv learns to adopt Emma’s compassion and generosity to be less pushy and aggressive, and Emma learns to adopt Liv’s take charge, dynamic personality to become less of a passive doormat.

Though it seems as if the two weddings are supposed to be some kind of religious ceremony, the movie never shows a religious clergyman officiating at an actual ceremony. That is the movie’s final missed opportunity.