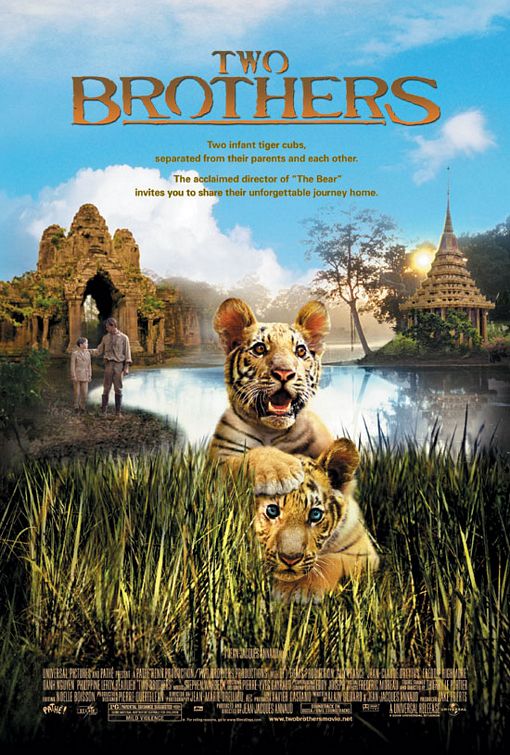 TWO BROTHERS is a visually stunning adventure about two tiger cubs in French Cambodia in the early 1900s that get separated when the society of men enters their idyllic world. Famous young hunter Aidan McRory, played perfectly by Guy Pearce, befriends one of the cubs, but a mean village chief takes the cub from him and sells him to a rundown circus. The other cub ends up in the regional French governor’s household as a pet for his young son, Raoul. The cub becomes too much to handle, however, so Raoul’s parents give the cub to the local Prince, who trains the cub to be a fierce fighter. One year later, the financially poor circus sells the other grown cub to the Prince, who wants to stage a big fight between them. Things don’t go as planned, however, which sets the stage for the movie’s exciting and touching third act.

TWO BROTHERS is a breathtaking, heartwarming animal adventure story that will transport your family into a different time and place. It’s a richly photographed fable, funny, exciting, and emotionally powerful, one of the best, most positive family movies of the year.

(BBB, C, Pa, L, V, A, D, M) Very strong moral worldview told mostly from animal point of view, with one character crosses himself saying, “God go with you” and another character thanking God, as well as some shots of ancient Buddhist and pagan ruins; one light obscenity and two light profanities such as “for God’s sake”; some light action violence such as man shoots tiger dead when it attacks another human, tigers fall into pit, tiger cub knocks over objects, tiger shot in ear, tigers escape, fire endangers tigers, and tigers raid meat wagon, bus, and houses; no sex; no nudity; alcohol use; smoking; and, lying, betrayal, looting ruins, and married woman has crush on famous young hunter, with a couple jokes made about that.

Once in awhile, a family movie comes along that provides such a unique, wonderful experience at the cinema that you wonder why they don’t make more movies like it. TWO BROTHERS is that kind of film. It’s a breathtaking, heartwarming, visually stunning animal adventure story that will transport your family into a different, captivating time and place.

The movie opens with two tigers frolicking among ancient ruins in the jungles of French Indochina, circa the 1920s. Soon, the tigers have two playful young cubs.

One day, however, a safari led by world-renowned hunter Aidan McRory, played perfectly by Guy Pearce, enters their world, looking to loot some of the ruins. The safari spots the father tiger and eventually kills him when he attacks a man. Aidan finds one of the cubs while the mother escapes into the jungle with the other cub. Naming it Kumal, he takes the cub back to the village that led him to the ruins, but the village chief betrays him to the local authorities, who arrest Aidan. The chief sells the cub to a local rundown circus.

Meanwhile, the mother and her other cub fall into a trap. The regional French governor wants to use the tigress on a hunt staged for the local Prince. In a funny scene, the clumsy Prince wounds the mother in the ear, and she runs off into the jungle. The governor’s little boy, Raoul, finds the little cub and keeps it. Eventually, however, her cub, who the boy names Sangha, becomes too big for the house, and Raoul’s parents secretly give the cub to the Prince for his private zoo.

The circus trains the cub, Kumal, for the tiger act, but the king trains Sangha to be a killer for his private arena. One year later, desperate for money, the circus owners sell Kumal to the Prince, who intends to put Kumal in the arena against Sangha. Things don’t go as planned, however, which sets the stage for the movie’s exciting and touching third act.

Director Jean-Jacques Arnaud also made the acclaimed wilderness adventure classic THE BEAR in 1988, but here he outdoes himself. Although he gives human qualities to the tigers in order to entice the audience’s sympathies, he is also cognizant of the real danger that the tigers can pose to human beings. In one well-written scene, Aidan tenderly explains to little Raoul that, although he doesn’t really want to do so, he must kill Kumal and Sangha, because they have never really lived in the wild and will eventually try to eat a human being for food. You’ll have to go see the movie to find out whether he does kill the two tigers.

Wonderfully directed, TWO BROTHERS is one of the most beautifully photographed movies of this, or any other, year. It is funny, exciting, and emotionally powerful. It may be the best, most entertaining family movie you’ll see this summer.