A TALE OF SPRINGTIME 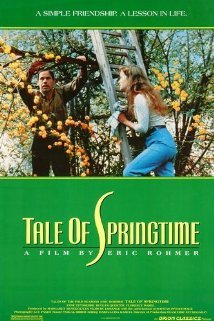 In A TALE OF SPRINGTIME, a music student named Natasha unravels the mystery of her lost heirloom necklace. Despite its impressionistic qualities, the movie doesn't generate enough conflict to keep the viewer interested. Not only is the storyline mediocre, but the character's lifestyles and values are depressingly sordid.

A TALE OF SPRINGTIME begins when a music student named Natasha invites her friend, Jeanne, to stay at her father’s city apartment and country house. They talk about a necklace meant for Natasha on her 18th birthday. Evidently, her father’s mistress, Eve, was last wearing it. As the film continues, the audience is wondering if: (1) Natasha hid the necklace to make Eve look bad; (2) Eve stole it; or, (3) Dad lost it. When the heirloom is found, the circumstances aren’t very interesting. Along the way, Natasha fights with Eve, and in an attempt to lure her Dad away from Eve, Natasha matches him with Jeanne. When they are alone, Dad makes sexual advances towards Jeanne, but she rejects him. Philosophers such as Kant become a means of explaining their confusing and sordid lifestyles.

At best, A TALE OF SPRINGTIME resembles an impressionistic painting. One scene is almost like a Manet painting come to life. However, A TALE OF SPRINGTIME is fatally marred by the lack of action and depressing outlook. At the reviewer’s screening, snoring was heard from the back of the theater. At least two representatives had fallen asleep!