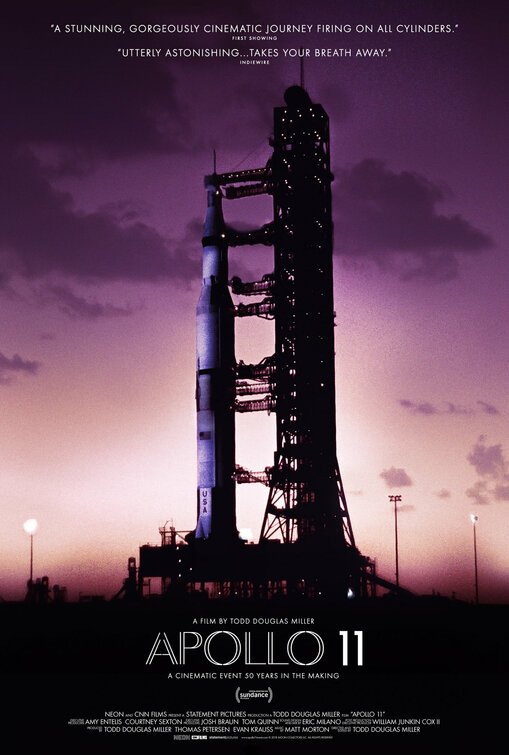 APOLLO 11 is a documentary that tells the classic story of NASA’s first moon landing in a new, unique way. It begins on launch day with a clock ticking off the hours and cuts between Mission Control, the astronauts prepping, the crowd outside gathering, and the press typing. Day by day is chronicled as the events unfold. Time slows down when the astronauts approach the moon, and their exploration is shown in intimate detail. As they return home, clips from President Kennedy’s speeches about the moon are mixed with montages of the hero’s welcome the astronauts received back on Earth.

Although there have been a number of documentaries regarding the Apollo 11 mission, none show it in such intimate detail. This rendition takes plenty of unseen footage and remasters it in HD, to create stunning visuals that look like they were shot yesterday. It tells the story in narrative form, without interviews and voiceovers, relying solely on the visuals and original audio. APOLLO 11 is a great history lesson for a new generation. The entire family should be able to enjoy this one.

(BBB, PPP, L, A, D):
Dominant Worldview and Other Worldview Content/Elements:
Very strong moral worldview where the story focuses on bravery, achievement, hard work, and reward, American patriotism is displayed with flags and constant reminders of America’s achievements with the space program, and several references point to the moon landing as an achievement for all mankind and mention how everyone in the world became one when it happened
Foul Language:
No foul language other than one use of “hell” sung during a song
Violence:
No violence
Sex:
No sex
Nudity:
No nudity
Alcohol Use:
Brief visuals of adults with beer cans while they sit at Cape Canaveral to watch the launch
Smoking and/or Drug Use and Abuse:
Some of the men working in Mission Control are seen smoking cigarettes and cigars throughout the mission; and,
Miscellaneous Immorality:
Nothing else objectionable.

On the surface, APOLLO 11 appears to be just another documentary about the space program’s quest for the moon, but it’s so much more than that. It starts on day one of the mission, with grand images of the Saturn V rocket being rolled out of its Cape Canaveral hanger to the launch pad. Engineers and workers walk alongside it, as if to protect their masterpiece. Meanwhile, away from the prying eyes of the public, astronauts Buzz Aldrin, Neil Armstrong and Michael Collins are getting suited up, all with solemn looks on their faces as they contemplate what they’re going do. Dozens of engineers in the Kennedy Space Center listen intently as they pour over their detailed launch schedule, discussing any last-minute changes that need to be made.

Outside, it’s early morning and a crowd is quickly growing in size. It looks like a tailgate party before a football game as people camp out in the back of their station wagons, relax in lawn chairs, and the children play games. The press have their cameras out recording the images for posterity, while celebrities and statesmen begin filing into the stands to witness the historic launch. At the bottom of the screen, a clock appears from time to time as a countdown to launch, and the voices of news broadcasts are mixed with the radio communication between mission control and the astronauts as they board Apollo 11.

A leak occurs on the launchpad just prior to departure, and the workers step in to fix it. With the all-clear, we have liftoff, and the historic flight begins. The clock at the bottom of the screen appears every few minutes as it chronicles the next eight days of the mission. The two days of travel between Earth and the moon pass relatively quickly, and then they approach the moon.

As the Lunar Module approaches a landing with Aldrin and Armstrong, the clock ticks by in real time as an infinite sea of lunar craters pass by underneath. There’s Armstrong’s famous first step on the moon, and a long stretch of both astronauts exploring the surface. Then, it’s time to go home. Back on earth they’re greeted as heroes, as President John Kennedy’s words of nearly a decade prior echo what is perhaps the greatest achievement of mankind.

Although there have been a number of documentaries regarding the Apollo 11 mission, none show it in such intimate detail. This 2019 rendition has managed to unearth plenty of unseen footage, and remaster it in HD. As a result, it creates stunning visuals that will have viewers questioning whether they’re actually watching footage from the 1960s. It tells the story in narrative form, without interviews and voiceovers, relying solely on the visuals and original audio.

At times, it’s easy to forget APOLLO 11 is a documentary. The editing is superb, coupled with engaging music that brings a modern edginess that nearly every other documentary on this subject lacks. APOLLO 11 truly brings this classic story up to date.

Since this movie is a documentary about a fairly benign subject, there’s very little questionable content. Toward the end, a song is played over a montage of footage as the astronauts travel home from the moon. The singer uses the word “hell” once, and other than that, there’s no foul language. Also, being the 1960s, the engineers smoked cigarettes and cigars in Mission Control, and the occasional cigarette is shown in the crowd gathered for the launch. Overall, APOLLO 11 is a great history lesson for a new generation, and a new, unique look at it for those who witnessed it. The entire family should be able to enjoy this one.