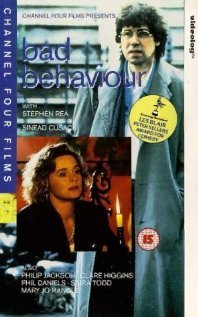 BAD BEHAVIOUR is an understated British comedy-drama which prefers to make its points through everyday circumstances rather than car-crashes, sleaze, or trashy theatrics. In this case, the remodeling of a bathroom, of all things, provokes all sorts of stress and soul searching in a mid-life marriage. Despite some scattered foul language, and a lack of any spiritual underpinnings to the story line, this is a well-crafted film with a number of worthwhile observations.

(H, LL, S, A/D) 9 obscenities & 3 profanities; sexual immorality implied but not endorsed; and, drinking & smoking throughout, though not glamorized.

American audiences accustomed to car crashes and “high concept” plot lines may find the British comedy/drama BAD BEHAVIOUR slow going, but mature viewers with a little patience will be rewarded with some subtle and insightful observations on mid-life marriage. The film is an ensemble piece in which undercurrents are more important than outbursts, and a seemingly meandering story line takes some interesting and provocative turns. An Irish expatriate, Jerry, now a city planner, takes his wife for granted after many years of marriage; and, his wife, Elly, finds herself dissatisfied with marriage and her career. Even with a decent flat, two pleasant boys and a part-time job in a bookstore, she feels as if she is quietly suffocating. Unfortunately, Jerry doesn’t know when to turn off his dry humor, put down the glass of Irish whiskey and start paying attention. Their marriage reaches a crisis over remodeling the bathroom and takes them in new directions.

BAD BEHAVIOUR contains scattered foul language, some gross dishonesty and adultery. However, overall, the emphasis is on careful observation rather than lewd conduct, involving situations with which many viewers can readily identify. Even though the English dialect requires some effort to understand, there are many worthwhile moments in this quiet but well-crafted film.