"Robots and Romance Team Up for Fun Family Adventure" 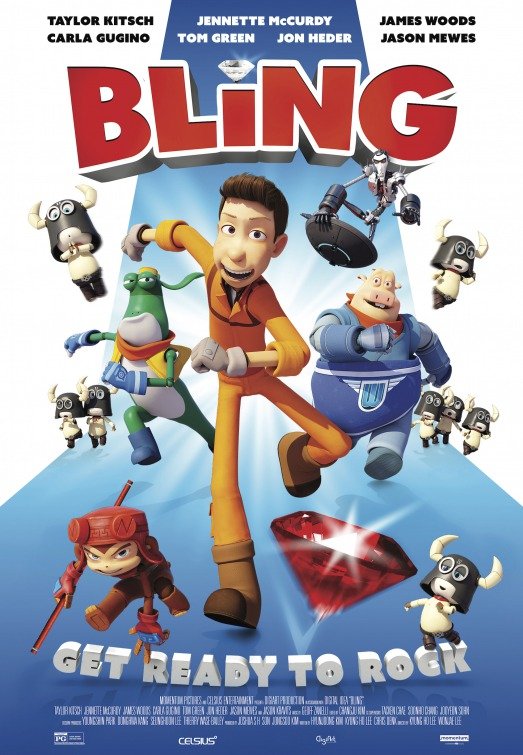 An animated adventure, BLING begins 20 years in the past where childhood friends, Sam and Sue, show a romantic interest in each other. Though Sam thinks about proposing to Sue someday, Sue’s rich aunt, Catherine, disdains for the unworthy Sam. Flash forward to where Sam works as a mechanic at the popular Roboworld. Sue has a job as a famous local TV reporter and hopes Sam will propose. Sam buys an engagement ring, but his plans to propose are thwarted when the city’s super villain, Oscar, accidentally takes his ring. Sam, with help from his robot friends, must find a way to recover the ring and finally win Sue’s hand.

BLING merges robots and romance to appeal to both children and adults. The romance between the main characters could be developed more, but the movie’s major flaw is that it remains on a superficial level throughout, relying mostly on robot battles to fill the time. Although the animation isn’t bad, it compares more with a television cartoon. There is very little negative content, but there’s enough cartoon violence to warrant parental guidance.

(BB, C, FR, L, VV, M) Strong overall moral worldview with acknowledgement of good and evil, the bad guys are punished while good prevails, stealing is pointed out to be morally wrong, and one robot character is a monk, but magic is referred to a couple times such as a comment to “work your magic” or describing something as “magical”; a couple light exclamatory profanities of “Oh my God” are used, plus a robot is designed to “fart” and does so on numerous occasions with a visible brown cloud released each time that emits an odor; strong cartoon action violence includes several scenes depict fights between robots and humans, robots use goo guns and real weaponry that fires bullets during some fight scenes, a giant evil robot tries to destroy a city and manages to wreck some buildings, some explosions take place, a car chase causes multiple accidents, people get hit by cars, but none are shown injured, a character gets slapped in the face a few times, a robot gets hit in the stomach by a huge metal ball; no sex; no nudity; no alcohol; no smoking or drugs; and, a ring is stolen from a jewelry store, a building is broken into, there are several attempts at blackmail, one character has a selfish personality, and one character displays a superior attitude to everyone else.

BLING is an animated adventure movie where an amusement park robot mechanic must get back his stolen engagement ring from a super-villain, before it’s too late to propose to his childhood sweetheart. BLING should appeal to people of all ages who like robots and romance, but there is some minor questionable content, including some cartoon violence and a few references to things as “magical.”

The story takes place in futuristic Cosmic City, but opens 20 years in the past where childhood friends, Sam and Sue, are chasing each other in a park. Sam holds something very special in his hand: an engagement ring made of aluminum can tabs. He wants to give it to Sue, but his fear of rejection holds him back. She tries to find out what Sam is hiding in his hand when Sue’s Aunt Catherine pulls up in a fancy limo and interrupts their flirtatious game. Catherine picks up on Sam’s intentions, but lets him know that to be worthy of any woman in their family, he must rise to the status of a great man.

Watching this scene from a distance is Oscar, who’s smitten with Aunt Catherine. Hearing her words, he devises a plan to become great in Catherine’s eyes so that she will accept his marriage proposal one day. His plan is to become a super villain.

Fast forward 20 years, and Aunt Catherine is now mayor of Cosmic City. Sue has become a local celebrity as the beautiful news reporter for Channel 7. Sam works as a mechanic for the popular Roboworld and spends his days hanging out with all his robot friends. Not only did he design the robots, but he also runs the Roboworld theatrical show. It’s the perfect backdrop for him to propose to Sue properly.

Sam and the robots visit a jewelry store to buy a ring. Not long after they leave, Oscar and his robot henchman, Victor, steal the most valuable ring in the store…one with the power to disable all the weapons Oscar has created in his arsenal, including Victor. That night, Sam’s proposal is botched due to his clumsiness, which wrecks half the amusement park. Sue leaves disappointed that, after 20 years, Sam still can’t commit.

One day Oscar and Victor pay a visit to Roboworld while in disguise. They rig the ATM machines to convert into weapons, but Aunt Catherine refuses his marriage proposal. He plans to blackmail her by threatening to destroy the city. Victor and Sam get tangled up, and the engagement ring gets switched with the power ring. So, Victor goes after Sam and the robots to get the ring back. Meanwhile, Sam tries to propose again, but realizes in the middle of he proposal that he has the wrong ring, forcing him to abandon his plan. Sue takes it the wrong way and informs him that she will be accepting a job offer in London, breaking off their relationship.

Sam isn’t willing to give up, however. So, he goes after Victor and Oscar to retrieve the engagement ring. At the same time, Catherine refuses Oscar’s proposal, and Oscar activates his robot army to destroy everything. Sam, who’s failed at just about everything in his life, becomes the city’s only hope to stop the evil robots. Will his love for Sue be enough to propel him to victory?

BLING is an animated family film that merges robots and romance to appeal to both children and adults alike. Although the romance between the main characters, Sam and Sue, could be developed a little more, it serves its purpose to invoke an emotional response and soften the otherwise action-oriented story. The movie’s major flaw is that it remains on a superficial level throughout, relying mostly on robot battles to fill in the time, rather than delve into the story more deeply. Also, the first forty-five minutes are really two different movies as the Sam and Oscar plots take their time to merge into anything cohesive. Although the animation isn’t bad, it’s not the most attractive for a feature, and compares more with a television cartoon.

There is little objectionable content, but there are a couple instances of light “Oh my God” type profanities and enough violence (though cartoonish in nature) that might give some parents pause. No one is seriously harmed, and anyone who falls in the line of fire, so to speak, bounces back without so much as a scrape. However, an army of robots do shoot bullets and blow up many things. There’s no doubt they are going for the kill. One robot Sam designed is able to pass gas and does so on multiple occasions. A smelly, brown cloud is released from the robot each time, and this is sometimes used as a weapon. A bright spot is the movie’s moral message of good vs. evil. BLING also has an emphasis on how stealing is wrong. While this gives BLING a strong moral worldview, there are a couple general references to magic, including a comment to “work your magic” and description of something as “magical,” but not in a witchcraft sense.