"Powerful But Too Many “F” Bombs" 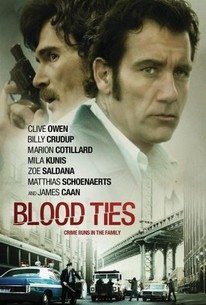 BLOOD TIES is a powerful, thought provoking crime drama about two brothers in 1974 New York City on two sides of the law. A police officer tries to help his older brother when the brother comes out of prison. However, despite an honest attempt to go straight, the brother returns to his criminal lifestyle when things go bad. The police officer feels guilty about letting his brother down one time when they were children. His love for his family also comes into play, but so does his commitment to morality and law.

BLOOD TIES is not a message movie. So, it doesn’t have a clear moral conclusion. However, it is thought provoking as the police officer confronts several moral dilemmas trying to deal with his brother and their father, who loves both sons. Also, the movie is well executed and acted, despite its low budget. Even so, the movie contains more than 150 obscenities, strong violence, strong sexual content in one scene especially, and brief drug references. Ultimately, it’s the abundant foul language that eventually makes BLOOD TIES morally and spiritually unacceptable.

(PaPa, RoRo, FR, B, C, LLL, VV, SS, N, AA, DD, MM) Strong mixed Romantic worldview, including some strong Romantic and antinomian (or lawless) attitudes, mitigated by some moral elements about family and doing the right thing, but done in a way that’s a bit morally complex and detailed, though thought-provoking, plus brief references to Christmas in dysfunctional family; extreme amount of foul language includes at least 159 obscenities (mostly “f” words, but not all), four strong profanities, two light profanities; strong violence with some blood includes point blank shooting murders, woman digs bullet out of man’s shoulder, shootouts, brothers fight, police raid house of prostitution, armed robbery, arson; depicted fornication but clothed, woman cheats on partner (it’s unclear if she’s married to the man), and references to prostitution with a couple short scenes of scantily clad women; rear male nudity when police raid house of prostitution and scantily clad women, but nothing really explicit shown; alcohol use and light drunkenness; smoking and some drug references; and, lying, cheating, stealing, armed robbery, and policeman quits the police force because he doesn’t want to implicate his brother and be the one to put him in jail.

BLOOD TIES is a well-executed crime drama about two brothers in 1974 New York City on two sides of the law. Despite its low budget, BLOOD TIES is well crafted and acted, though the dialogue could be better and, certainly, much cleaner.

The movie opens in 1974 with 50-year-old Chris being released from prison after several years in prison following a gangland murder. Reluctantly waiting for him is his younger brother, Frank, a talented police detective and their sister, Marie. Their father, Leon, has cancer, and one of his lungs has been removed.

Frank lets Chris stay at his apartment, hoping that his brother has changed. Chris appears to want to change, even though one of his gangster friends offers Chris some vague criminal jobs.

However, things start going badly for Chris. One of the guys at the used car lot where Chris works as a janitor unfairly gives Chris a hard time when one of his old ex-con friends, Mike, comes by to say hello. The injustice makes Chris angry, and he gets fired. Then, another legitimate job opportunity with Mike turns sour, and Mike and Chris decide to go back to their lives of crime.

When his older brother’s criminal lifestyle starts to interact with Frank’s job on the police force, will Frank be forced to stop his brother himself? More specifically, will Frank be able to shoot Chris if faced with that dilemma?

As this story develops, Chris falls for a younger woman, and she with him. Also, Frank tries to get back together with an ex-girlfriend, whose boyfriend Frank just put back into jail. The movie effectively intertwines these subplots into the main plot just described.

BLOOD TIES doesn’t contain any religious content other than references to Christmas and a possible church wedding that takes place off-screen. It does, however, deal with some moral issues.

For instance, Frank is torn between his blood ties and loyalty to his father and his criminal brother and his job as a police detective. The movie overtly states that Frank is very good at his job, and this is a good thing. However, when his brother, Chris, returns to his life of crime, Frank becomes conflicted. A flashback reveals that, when they were young children, Chris asked Frank to be the lookout while Chris and his teenage friends robbed a house. Frank was supposed to knock three times if the police or someone else gets suspicious. However, Frank is too scared to give the warning, and Chris is arrested for his first crime. So, Frank carries a lot of guilt over that arrest, which clearly led to Chris getting more and more involved in crime. Thus, Frank feels responsible for his brother, although he becomes very angry when Chris returns to the criminal lifestyle.

The movie does a great job of bringing the circumstances of that one flashback into the climax during the third act. It truly is an absolutely brilliant piece of filmmaking, carried out to perfection by the actors. The climax leads to an emotionally powerful resolution that’s also deftly handled in a way that’s thought provoking. The third act is made even richer by the fact that Frank realizes their dying father loves his brother despite the wrongs he’s done. So, how can Frank do any less? There’s also a touching scene between Frank and his father where the father confesses that, although he may have shown more love to Chris because Chris had a harder life before Frank was born, he still loves Frank too and is proud of him.

Thus, guilt, love, family loyalty, justice, and righteousness all come into play in BLOOD TIES in a subtle, interesting way.

All that said, the movie’s worldview is mixed with both Romantic and moral elements. BLOOD TIES is not a message movie in the sense that it provides a clear moral or sociological conclusion to the story. Thus, its intention instead seems to be to offer up some open-ended moral dilemmas to the viewer in a thought-provoking, emotional way. It effectively does that. However, it contains more than 150 obscenities and profanities. BLOOD TIES also has some strong violence, some sexual content, and brief drug references. Ultimately, it’s the abundant foul language that eventually makes BLOOD TIES morally and spiritually unacceptable. A bigger budget and much more restraint, and perhaps a little more focus, not to mention stronger Christian content, might have made BLOOD TIES a truly great movie.