"Can Love Survive the Flames of War?" 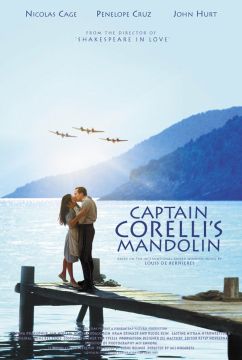 The World War II story, CAPTAIN CORELLI’S MANDOLIN is set on one of the famous islands off the Mediterranean coast of Greece. Spanish actress Penelope Cruz plays Pelagia, a young woman learning to be a doctor from her father, the village physician. When the occupying Italian army billets a young captain, Antonio Corelli, played by Nicolas Cage, in their home, the captain and his love of life and music turns Pelagia’s heart, and her world, upside down. Inevitably, the war engulfs their idyllic world, and Captain Corelli must make a life and death decision for the villagers and his own men.

Except for his strange accent, Mr. Cage and Miss Cruz hand in fine performances in CAPTAIN CORELLI’S MANDOLIN, which helps make up for the reserved direction of the movie. They are ably supported by the rest of the cast, especially veteran John Hurt as Pelagia’s father. The romantic worldview of CAPTAIN CORELLI’S MANDOLIN suggests that culture (Nazi Germany, for example) corrupts human nature. This worldview problem is mitigated by strong moral content and expressions of Christian faith by many of the villagers. Regrettably, the movie contains some sexual immorality, nudity and strong foul language.

CAPTAIN CORELLI’S MANDOLIN is a romantic date movie for people who don’t mind mixing their romance with a little history and politics. It stars Nicolas Cage and Penelope Cruz as two star-crossed lovers who find themselves on opposites sides during World War II. Eventually, the war hits close to home, forcing one of them to make a moral choice.

Based on a popular novel and true historical facts, CAPTAIN CORELLI’S MANDOLIN is set on Cephallonia, one of the famous Ionian islands off the Mediterranean coast of Greece. Spanish actress Penelope Cruz plays Pelagia, a young woman learning to be a doctor from her father, the village physician (marvelously played by John Hurt). An irreligious but moral man, Dr. Iannis does not think Pelagia’s hearty fiance, Mandras, is equal to his daughter’s intelligence. When the German and Italian fascists land on Cephallonia, Pelagia and her father are forced to billet Captain Antonio Corelli, an Italian soldier played by Nicolas Cage, in their home. Mandras, meanwhile, joins the partisan resistance fighters in the mountains.

As the story progresses, it becomes clear that Captain Corelli is full of love for life, music and Pelagia. Pelagia is at first upset that Corelli can be so happy-go-lucky in such a violent time in European history, but she comes to love him and his passion for living. Pelagia has grown apart from Mandras, who earlier in the movie went off to Albania to fight the Italians. The Greeks were winning that battle until the Germans decided to help their allies.

Inevitably, the war engulfs the idyllic environment of Cephallonia. When the Italians in Rome surrender to the Allies, Captain Corelli and the other Italian soldiers are forced to take sides against the ruthless German fascists, who can’t be trusted. Not only is Antonio’s love for Pelagia endangered, but so is his life and the life of his men.

Directed by Englishman John Madden (SHAKESPEARE IN LOVE and the MOVIEGUIDE® Award-winning MRS. BROWN), CAPTAIN CORELLI’S MANDOLIN relies on the romantic strength of its lead actors for its power. Madden takes a reserved approach to the material, which doesn’t always serve the passionate story well. Mr. Cage and Miss Cruz hand in fine performances, however. Mr. Cage’s accent, however, leaves much to be desired and has been the object of ridicule among critics. They come alive during the more emotional moments of the movie, which help make up for Madden’s reserved, serviceable direction. Christian Bale (EMPIRE OF THE SUN and AMERICAN PSYCHO) as Mandras also is good, but his character is under-utilized. Especially helpful are the warm performances turned in by John Hurt as Pelagia’s humanist father and Irene Pappas as the mother of Mandras. Filling out the cast are talented David Weber as a minor German officer who discovers what it means to work for the Nazis Germany and Piero Maggió as an Italian soldier who discovers the deadly cost that a promise can demand.

The romantic worldview of CAPTAIN CORELLI’S MANDOLIN suggests that culture (Nazi Germany, for example) corrupts human nature. This worldview problem is mitigated by strong moral content. For instance, Captain Corelli tells a friendly German officer that morality trumps racial and ethnic divisions. If someone by the side of the road is in trouble and needs your help, says Corelli, you should think of that man as your brother. Later, both he and Mandras demonstrate that they live by this moral code, which comes from Jesus Christ’s description of the Good Samaritan in the Bible. There are also scenes where the villagers exhibit Christian faith and practice, in a Greek Orthodox context. Although Pelagia’s father expresses his humanist disbelief in miracles and a Communist villager gets into an argument with a Christian villager about Christianity, the movie shows more than a nodding reverence for Christian belief. This reverence especially displays itself when some villagers express their beliefs during the movie’s more traumatic wartime scenes and when an earthquake hits the village after the war. In fact, in one scene during the movie, a Nazi soldier roughly pushes an Orthodox priest out of the way. This clearly shows the disdain that these reprehensible villains had for Christian values and symbols.

It’s too bad, therefore, that CAPTAIN CORELLI’S MANDOLIN contains some sexual immorality with nudity and several “f” words. Thus, the Italian soldiers frolic with some semi-nude prostitutes on the beach, and Captain Corelli romances a semi-nude Pealgia before the camera discretely cuts away from them. The “f” words come into play when the Greek officials on the island tell the Italians, whom they defeated in Albania, that they would rather surrender to the German army, the true conquerors of Greece during World War II. This kind of content is not fit for any “date” movie for anybody, much less for people of true religious faith. Jesus Christ clearly condemns immoral sexual lust and practices in the Bible, including all premarital intercourse, or fornication, and sodomy outside of heterosexual marriage.