"Care for Your Family" 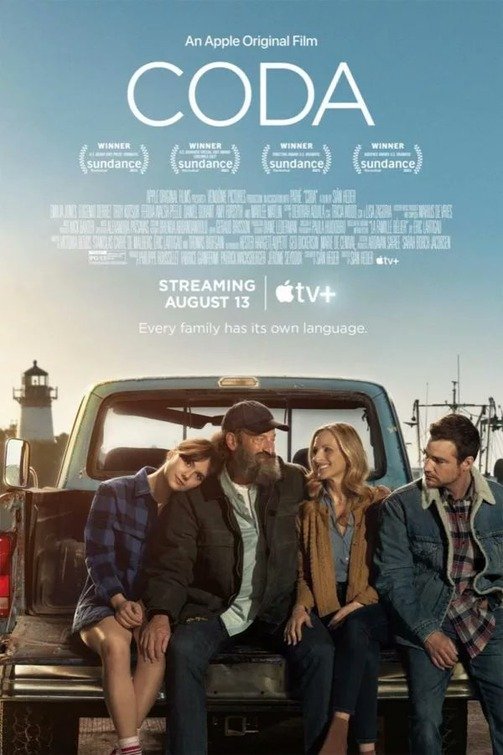 CODA is a well-made, touching drama. Ruby is the only hearing person in her deaf family and has spent her whole life interpreting for them. Every day, around three am, she wakes up to go on the fishing boat with her deaf father and brother to fish. Ruby decides to enter the school choir. Encouraged by her teacher, she discovers she has a natural talent and loves to sing. Will Ruby be able to go her own way? Will her family be able to stand on their own without her?

CODA is a heartwarming drama with a realistic feel to it. The acting is excellent. Even better, the movie has a strong Christian, moral, pro-family worldview. There are references to prayer and an emphasis on family members helping one another and staying together. CODA shows that government regulations hurt the fishing industry. Thus, it has a pro-American, pro-capitalist worldview supporting free enterprise and limited government. CODA is marred by excessive foul language, some New Age references to meditation, lots of strongly implied and demonstrated sex, and marijuana use. So, MOVIEGUIDE® advises extreme caution.

(CC, BB, PP, CapCap, ACAC, FR, Pa, LLL, SS, N, A, DD, M):
Dominant Worldview and Other Worldview Content/Elements:
Strong Christian, moral, pro-family worldview includes mentions of prayer, family members helping each other, an emphasis on staying together as a family, family members making sacrifices for one another, and parents staying together as a married couple, plus strong pro-American, pro-capitalist, free market, free enterprise themes that include a theme of governments hurting business with regulations and taxes, but there are some false pagan references to meditation
Foul Language:
33 obscenities, three profanities including one use of Jesus Christ as curse word, and statements about having an infection in one’s private parts
Violence:
No violence
Sex:
lots of strongly implied and demonstrated sex, married couple is seen briefly making love and implied sex with a high schooler
Nudity:
Upper male nudity
Alcohol Use:
Some drinking
Smoking and/or Drug Use and Abuse:
No tobacco use but there’s marijuana smoking; and,
Miscellaneous Immorality:
Lying, bullying.

CODA is a well-made drama about a girl named Ruby who helps her deaf family with their fisherman business, but tension occurs when she tells them she wants to be a singer and go her own way. CODA is a well-made, heartwarming story with some positive Christian, moral, pro-family and pro-capitalist elements, but MOVIEGUIDE® advises extreme caution because of excessive foul language, two sexual situations, references to meditation, and marijuana use.

After working on the boat, Ruby has to head to school. Sadly, she gets teased for having a deaf family and for working on a fishing boat. This has led her to try to be invisible, but she has to be bold when she decides to sign up for the school choir. The first time Ruby’s asked to sing, she runs away. However, her teacher, Bernardo Villalobos won’t let Ruby get away with being late, running away and not practicing. Instead, he pushes her to become a great singer. Ruby is finally finding something she loves to do — sing, but she doesn’t know how to tell her family about it.

Meanwhile, Ruby’s family is trying to fish without her assistance. One day a government official gets on the boat and reports them for not having a hearing person on the boat with them. Without Ruby, they won’t be able to fish, but Ruby’s desire and natural talent is to sing. What will become of this tightknit family?

CODA is a well-made, powerful drama with a realistic feel to it. The acting is excellent.

Even better, CODA tells a heartwarming story and has a beautiful message about loving your family and sticking with them no matter what. The family has to learn together how to overcome obstacles, and each person is willing to sacrifice for the other person. Also, the movie has an underlying free market, libertarian message that shows when the government gets involved, things get complicated. Throughout the movie, the government is adding more taxation and more regulation and making it difficult for fishermen to perform their jobs and still be paid. Though this is the case, the movie does have some cautionary elements, including some foul language, lots of strongly implied and demonstrated sex and marijuana use. So, MOVIEGUIDE® advises extreme caution.