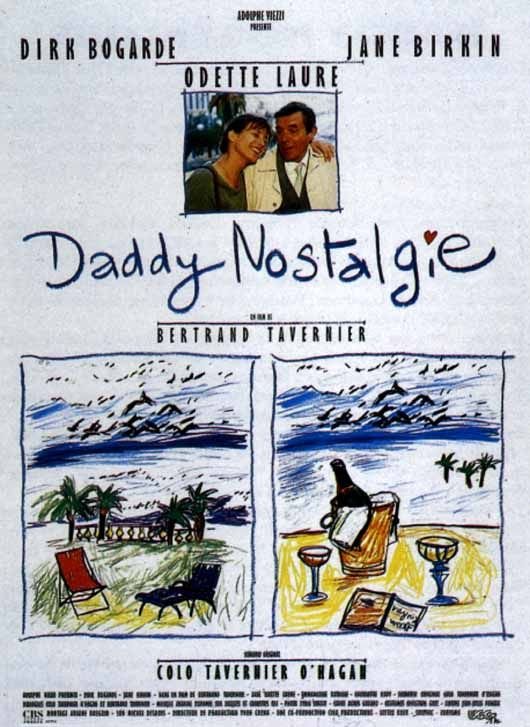 While recovering from an serious heart illness, an aging father shares his past and fears of mortality with his daughter just as it is time for him to die. Although touching in many ways, the father unfortunately sees nothing beyond the inevitability of death and so lives a life of wantonness and self-pleasure, bringing to mind Ecclesiastes 11:9.

(L, M) Six obscenities and 1 profanity; excessive smoking and drinking; and, a slight deriding of Catholicism.

Disregarding plot in favor of nuance and sentiment, DADDY NOSTALGIA is a bittersweet French drama about an aging father who gets to know his daughter just as it is time for him to die.

A retired English businessman, living with his French wife in the south of France, has just undergone a serious heart operation. Upon hearing the news, his daughter Caroline, a Paris-based screenwriter separated from her husband, rushes to his hospital bed. Caroline senses it may be the last opportunity she will have to break through to her urbane but selfish father, a charming hedonist too caught up in his successful life to pay her much heed.

Although Caroline and Daddy have never been close, an intimate father-daughter bond develops during the several weeks he spends recovering from his illness in his home on the Cote d’Azur. Reminiscing about the good old days for hours on end, Daddy’s love of life is undiminished by his terrible illness. For the first time, he and Caroline get to know each other.

About his life, Daddy says, “I have no regrets; in fact, I envy me.” However, there are glitches Daddy must face up to, including his nagging and overprotective wife, with whom he has long since lost any semblance of intimacy, yet he relishes her companionship and appreciates her concern. Daddy is also fragile, bored, restless, and less than happy about the aging process (into which there are keen insights). Discussing his fear of mortality, he poignantly tells Caroline, “I didn’t want to grow old.”

During Daddy’s slow recuperation, there are numerous dips into nostalgic reverie. Caroline resents her father for being so selfish, but admires him for living the life he wanted to live. The characters, emotions and relationships in DADDY NOSTALGIA are wonderfully fleshed out, and are as complicated as those in real-life families.

Says director Bertrand Tavernier of his finely wrought family portrait: “In this kind of film, the characters and the emotion should be more important than plot. I don’t want any twists. I don’t want anything mechanical, because it is very personal and intimate.” Thus, the main thrusts of the film are the talks between father and daughter.

Moreover, “The film is based on little things… on the moments in life where people meet each other, where people hurt each other, where people on opposite sides suddenly have a moment of closeness. Those moments look small, but they can be terribly important. Like when Daddy says to his young daughter, who’s bringing him a little poem she wrote, ‘Go to bed.’ It may seem like nothing, but for her it’s a terrible rejection. It’s like murder.”

Ping-ponging between French and English dialogue, DADDY NOSTALGIA disdains melodrama for the hesitations and reversal of family feelings that can never be wholly articulated. It’s a quiet, intimate and tender film, suffuse in emotion, that tugs at your heart-strings without manipulating your emotions.

Yet Daddy, a person who knowing the inevitability of death, sees nothing beyond and so lives a life of wantonness and self-pleasure. As the writer in Ecclesiastes 11:9 sarcastically warns, “Be happy young man, while you are young, and let your heart give you joy in the days of your youth. Follow the ways of your heart and whatever your eyes see, but know that for all these things God will bring you to judgment.”