"Too Hard and Too Soft" 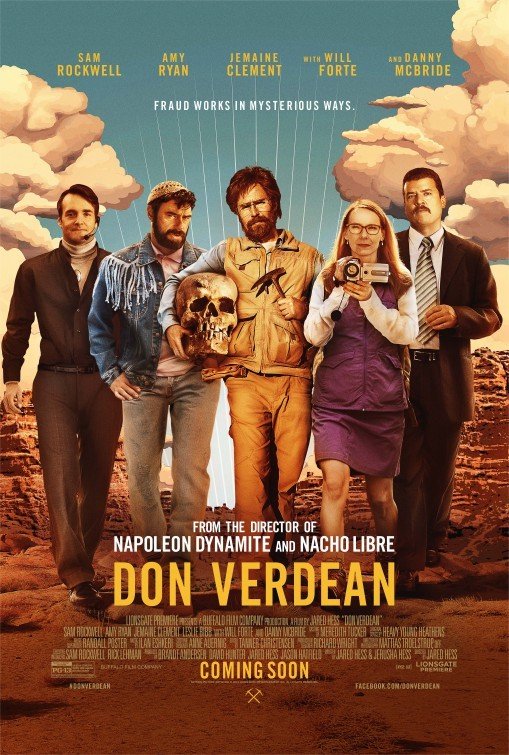 DON VERDEAN pokes fun at the cottage industry of wannabe Christian archeologists trying to confirm people and events in the Bible. A small-town pastor hires the title character, a Christian archeologist fallen on hard times, to find relics in the Holy Land. After a problem with one artifact, Don and his female assistant go to Israel to look for the skull of Goliath. Don has trouble finding it, so he fakes the skull using the long-dead body of a famous Israeli wrestler. Don’s Israeli guide, Boaz, discovers the fake and blackmails Don into bringing him to America. Things go from bad to worse when they decide to fake the Holy Grail.

DON VERDEAN is funny in parts, but parts are too serious, and other parts are too silly. Also, sometimes the movie’s Christian content seems positive, while other times it seems or is too negative. Of course, comedies naturally tend to be exaggerated portrayals, but going too far, or being too silly, can undercut a movie’s humor. All in all, therefore, DON VERDEAN fails to be an acceptable movie, artistically or thematically.

(RoRo, AbAb, CC, B, L, V, S, A, MM) Strong Romantic worldview that mocks Christian evangelicals (in some parts more than others such as a false view of husband and wife relationships among more conservative Christians is depicted in one scene, which is a bit over the top), but the title character, a Christian, is not always seen as negative, just a little too earnest at times, which causes him to commit fraud, but he eventually repents, asks forgiveness and still seems to retain his faith, plus his female Christian assistant is seen as a positive character, and her faith is strong, and she really doesn’t do anything wrong; five obscenities (two “d” words, one “h” word and two “bastards”) and two light profanities; some violence includes holding people at gunpoint, kidnapping, punching, threats; no sex scenes, but woman calls man a “pimp” when she learns he set her up with a date with a man who thinks of himself as a ladies man, man talks about finding “hot” women in America, dancing, brief talk about Sodom and Gomorrah but not salacious, and unmarried couple kisses; no nudity; alcohol use; no smoking or drugs; and, fraud, fakery, blackmail, kidnapping, lying, deceit.

DON VERDEAN is an attempt by the filmmakers behind the Catholic-oriented comedy, NACHO LIBRE, to poke fun at the cottage industry of wannabe Christian archeologists trying to confirm the people and events in the Bible. DON VERDEAN goes a bit too far at times, despite some positive moments of Christian faith, especially in the title character’s female assistant, who’s Christian, kind, honest, and forgiving.

The movie opens with an ambitious, small-town pastor, Tony Lazarus, hiring Don Verdean, a Christian archeologist, to find sacred relics in the Holy Land and bring them to the pastor’s church for display. Don had one find earlier in his career, a pair of ancient shears that could even have been the ones Delilah used to cut Samson’s hair. Since then, however, the pickings have been a little lean for Don, or so the movie suggests. So, now, Don travels the United States with his new but loyal female assistant, Carol, speaking at churches and selling his books and videos.

Don’s contact in Israel, Boaz, assures Don that he can send Don and Pastor Lazarus a stone formation that looks like Lot’s wife, after she was turned into a pillar of salt. Connected by computers, Boaz shows Don a photo of the large rock, and it does indeed look like a woman’s body. However, when the formation is shipped to the church, it looks nothing like the rock formation in the photo. In fact, it looks more like a man, so Don makes up a story about Lot’s wife being a hermaphrodite. Worse, the pastor’s bubble-headed wife sings a stupid song about wives obeying their husbands unconditionally, a distortion of New Testament passages about husbands being the heads of the household.

Trying to make up for the problems with the rock formation, Don assures the pastor that his next target will be the head of Goliath, the giant whom David slew with a slingshot. Because Pastor Tony’s church is paying all of Don’s expenses, Don and Carol travel to Israel to search for Goliath’s head in the place where his battle with David occurred. When they and Boaz get there, however, their first dig for Goliath’s head is interrupted by the Israeli police, who tell them they can’t dig there.

Distraught, and running out of time, Don decides to fake a find. He learns about a popular but long dead Israeli wrestler who was afflicted with gigantism. Secretly, Don raids the poor man’s gravesite at night, cuts off the skull and buries it next to a secluded marker in Goliath’s supposed hometown.

Boaz is suspicious of the find, however. He confronts Don and blackmails Don to take him back to America with Carol and him so that Boaz can savor the glamour of the States, and perhaps even find a “hot” girlfriend.

Things go from bad to worse as Don and Boaz get deeper and deeper into their lies and deceitfulness. Boaz turns out to be the worst partner a would-be criminal could ever have. It’s only a matter of time before they’re exposed, and Carol loses all faith in her boss. It doesn’t help that a rival evangelist, a former Satanist turned Christian, is out to get both Don and Pastor Lazarus.

DON VERDEAN is funny in parts, but parts of it are too serious, including parts of Sam Rockwell’s performance as the title character, and other parts are too silly and over the top. Thus, there seems to be a tonal problem with this movie.

Also, sometimes the movie’s Christian content seems positive, while other times it seems or is too negative. This problem damages the movie’s credibility as both a movie and a fair, though admittedly comical, portrayal of Christians. Comedies tend to be exaggerated portrayals of people, things and life, but overplaying such things can be just as dangerous as underplaying them when doing comedy. Either way, you can lose the viewer.

All in all, therefore, MOVIEGUIDE® can’t judge DON VERDEAN as an acceptable moviegoing experience, artistically or thematically. There is some brief foul language and light crude references as well in DON VERDEAN.