"Gain the World, Lose Your Soul" 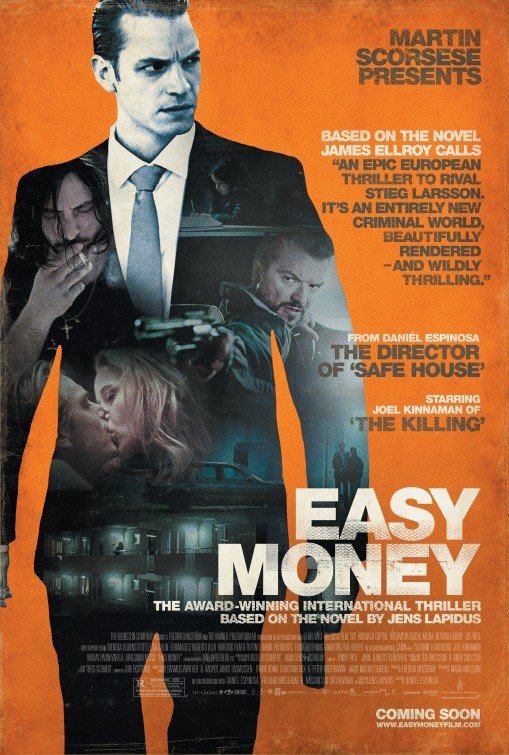 EASY MONEY is a Swedish crime thriller about three men involved in drug trafficking whose paths converge due to several twists of fate. J.W. is a poor college student who leads a double life. By day, he’s a thriving college student three weeks away from graduating. By night, he transports cocaine for an Arab gang. Jorge is an escaped convict who gets help from his cousin in Germany, who’s shipping cocaine into Stockholm. Jorge reneged on some money he owed a Serbian mafia leader. A hit man taking custody of his own 8-year-old daughter is sent after Jorge. All three men have plans to leave the drug life. Will their plans succeed?

The storyline and production in EASY MONEY are masterfully done. The movie has a pagan worldview, slightly mixed with Christian content and moral elements. Some of the movie’s themes are sacrifice, compassion, love, hate, greed, fate, and life and death. Excessive foul language and violence, the drug references, and some lewd content warrant extreme caution for EASY MONEY.

(PaPaPa, C, B, LLL, VVV, SS, NN, AA, DDD, MMM) Very strong, slightly mixed pagan worldview with some Christian and moral elements including images of the Cross, references to the Virgin Mary and angels, and themes of sacrifice, compassion, love, hate, greed, and life and death; 54 obscenities and two profanities, toilet humor at dinner party and during job as a driver; very strong violence includes man beats up men in bathroom and kills at least one, man shot then punched until face is unrecognizable, several other accounts of violent fights mostly showing blood, point blank range shooting and killing; implied and depicted sex in bedroom plus stripper in robe and underwear dances; upper female nudity and upper male nudity; alcohol use; some smoking and heavy usage and trafficking of illegal drugs; and, lying, jailbreak, house vandalism, yelling in various arguments, man breaks into building.

In EASY MONEY, a Swedish crime thriller, drug trafficking and making money by any means necessary is the name of the game for three men.

J.W. is a poor college student who leads a double life. Three weeks away from graduating, he goes to college by day, but, by night, he’s a driver for Arab cocaine pushers.

Jorge is an escaped convict and main connection to his cousin in Germany who will be shipping millions of dollars of cocaine into Stockholm. Jorge reneged on money that he owed a Serbian mafia leader, Radovan. Radovan assigns his hit man, Mrado, to find Jorge.

J.W. is also assigned to follow Jorge for his boss, Abdulkarim, because Jorge has good ties to Abdulkarim and his gang. J.W. cleverly rescues Jorge from Mrado. Abdulkarim pays him money to hide the badly beaten Jorge.

J.W., Jorge, and Mrado have plans to leave the drug life in Sweden. J.W. realizes he is in over his head and naively thinks he can just walk away. Jorge wants to be there for his pregnant sister and mother, both of whom have really suffered because of Jorge’s life of crime. Lastly, Mrado must take custody of his 8-year-old daughter, Lovisa, due to her mother’s drug addiction. He promises his daughter that, after he does this one last job, they will leave and return to their home country together.

EASY MONEY is a violent action-packed thriller that ends in a tragic showdown where the double-crossers are themselves double-crossed. It’s wonderfully shot with high quality cinematography in composition and lighting. The character development is superbly done. The vulnerable, compassionate human side of each man is seen at different points in the story in such a way that it creates empathy among the audience for these high profile villains.

The emphasis is on getting money by controlling the drug trade. A less pronounced aspect of the film is Christianity. Jorge has a cross that he wears on his neck and in his sister’s apartment is a picture of the Virgin Mary being surrounded by cherubs or angels.

Some of the themes are sacrifice, compassion, love, hate, greed, and life and death. The storyline and production aspects of EASY MONEY are masterfully done. Due to excessive language and violence, however, there is an extreme caution for younger and older children.