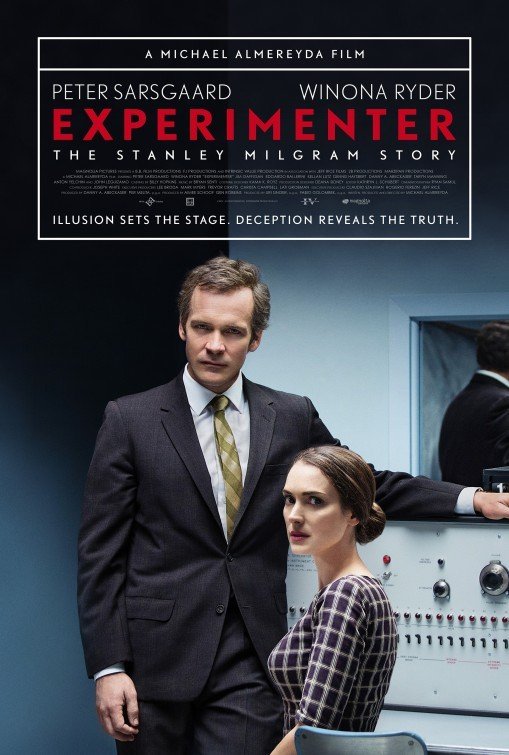 In EXPERIMENTER, Stanley Milgram, a social psychologist at Yale, begins a series of experiments in 1961 to test how far someone is willing to go to obey authority. As an American Jew, he’s greatly concerned with the human atrocities that occurred during the Holocaust. Many scientists consider his experiments unethical, because they involved deceiving test subjects into thinking they were harming another person by shocking them, when they weren’t. Though he moves to Harvard, Milgram spends the rest of his life trying to convince the world to pay attention to his findings, which reveal disturbing aspects of human nature.

EXPERIMENTER opens with a suspenseful sequence showing the initial experiment. However, once the experiment’s secrets are revealed, the rest of the movie is just a long sequence of dry scenes filled with academics waxing philosophical about ethics, human atrocities and tenure. The style is a mix of film and theater, breaking the fourth wall, and even breaking into song once. Subjects like the Holocaust come up repeatedly, and scenes involving the shock experiment can be intense. EXPERIMENTER warrants caution for older children and adults.

(B, L, V, S, A, D, M) Light moral premise and worldview regarding the ethical treatment of human beings with several references to the Holocaust when scientists conduct fake experiments on human subjects to test why so many people in Germany and Europe participated in the Holocaust during World War II; six obscenities and profanities; individuals are falsely led to believe they are administering painful shocks to human test subjects who pretend to scream in pain and beg them to stop; no depicted sexual content but mention of thinking about living together; no nudity; alcoholic drinks served at a party; some cigarette smoking; and, it’s implied an unmarried couple decide to live together, but they end up getting married, a black man talks about being treated unfairly by a policemen as a boy, and a discussion about racism in television and the South takes place.

In EXPERIMENTER, a social psychologist at Yale conducts controversial shock experiments to test the individual’s will to resist authority. EXPERIMENTER uses unconventional techniques to tell this true story, but it has little entertainment value and warrants a caution.

The movie opens at Yale in 1961. Stanley Milgram, a social psychologist seeking tenure, is about to begin his infamous shock experiments. Two men enter the room and are assigned a role as either the Teacher or Learner. They are then put in separate rooms, but can communicate through a microphone. The Teacher reads out a series of paired words, and the Learner must be able to repeat the pairs back correctly. If the Learner gets it wrong, the Teacher is instructed to administer a shock to the Learner through a machine. Initially, the shocks are mild, but upon each wrong answer, the Teacher increases the voltage until the shock is potentially fatal. This is especially a concern since the Learner mentions he has a heart condition. What the Teachers don’t know is that the Learner is really a scientist participating in the experiment, who is not being shocked at all, but rather is faking his pain as he begs for them to stop the experiment.

During these “tests,” Milgram sits back and calmly watches through a one-way mirror, taking notes on the reactions of the Teachers. Once several rounds of the experiment are complete, he’s disturbed by the results. Nearly all test subjects proceed with the experiment, despite their moral objections to harming the Learner. To Milgram, it confirms the willingness for human beings to commit atrocities to other human beings when they were being instructed to do so, but it didn’t answer the question of why.

Milgram’s “agentic experiments,” as he called them, become the center of controversy in the psychological scientific community. Many claim it to be unethical because of the trauma the Teachers were made to suffer, but that was the point, Milgram noted. No one was made to do anything, he adds, saying each person chose to continue shocking the Learner of their own free will.

Milgram’s experiment cost him tenure at Yale, but he soon moves on to Harvard and guided his students through various experiments pertaining to prejudice and social conditioning. He publishes his book “Obedience to Authority” in 1974, detailing his Yale experiment and his findings, which is turned into a TV movie in 1976 starring William Shatner as Milgram.

Throughout all this, Milgram’s wife, Sasha, stays obediently by his side, supporting his work while raising their two children. Their lives together are cut short, however, when Milgram dies from a heart attack in 1984. His work lives on as students today continue to use some of his experiments in an effort to understand the human’s propensity to conform to the demands of authority figures despite immoral, unethical implications.

The first scene provides an adequate hook for the movie as it the experiment gets underway. There is a foreboding sense that something bad is about to happen to someone. However, 15 minutes later, that feeling is completely dissipated as the secret of the experiment is revealed. The rest of the movie is a series of dry scenes filled with academics waxing philosophical about ethics, human atrocities and tenure. The style is an eclectic mixture of film and theater.

During the movie, Peter Sarsgaard as Stanley Milgram continually breaks the fourth wall by looking to the camera and talking directly to the viewers about his thoughts on psychological phenomena. Several scenes take place in front of a static scene painting as if on a stage, and there is even one point where Sarsgaard breaks out in song as if in a musical. Though interesting, these unconventional quirks do nothing to alleviate the dull pall that hovers over most of the movie.

Though the inherent agentic nature of human beings is discussed in relation to the experiments and the Holocaust, there is an overall moral theme. The fact that people obey authority regardless of an immoral or unethical outcome is seen to be a bad thing. That’s the point of Milgram’s experiments: to determine the cause of such behavior so that such atrocities as those Hitler imposed on Europe through the use of his obedient subjects might be deterred in the future. One scene discusses racism in society while a black man recounts a humiliating run-in with a policeman as a child. One character jumps to the conclusion that it must have happened in the South, not hesitating to stereotype an entire subculture of the country.

There isn’t much foul language in EXPERIMENTER. A party scene shows some people with wine in hand, and there is an implication that a couple, who just met, decide to live together before getting married. Children wouldn’t have any interest in this movie or probably understand most of it. Caution is advised for older children and adults.