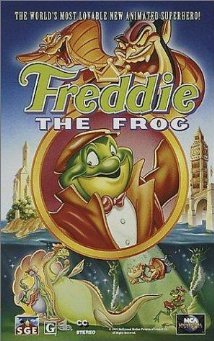 In FREDDIE AS F.R.O. 7, the magical thinking of a prince-turned-secret agent frog conquers the evil forces threatening Britain's cultural heritage. Despite its technicolor animation and hip-hop music, the movie is built upon an evil, occultic premise. In fact, at the press screening, at least a dozen children ran out of the theater screaming while others cried feverishly, clutching their parents.

FREDDIE AS F.R.O. tells about young prince Fredric, who is gifted with magical powers. When his parents, the Great Magician King and Queen, die under mysterious circumstances, he inherits the throne. When his evil Aunt Messiah turns him into a frog, he remembers his Dad’s words: “Your mind is greater than any weapon.” Years later, Freddie is called to London to uncover a mystery: a bizarre, unidentifiable force is making Britain’s historical landmarks disappear! Evidently, the “black magic” of Aunt Messina and “El Supremo” is responsible for the disappearances. They reason that these landmarks contain Britain’s “life force.” The extinction of these foundations will cause society to crumble and pave the way to a new world ruled by Aunt Messina and El Supremo.

Of course, our cultural heritage is the foundation for our society and eliminating this structure would result in anarchy or tyranny. However, the movie falters by suggesting the buildings manifest a “life force” when they are really inanimate objects. This terminology is often used in witchcraft and compliments Freddie’s magical thinking throughout the film. Thus, despite its technicolor animation and hip-hop music, the movie is built upon an evil, occultic premise. Furthermore, FREDDIE AS F.R.O. 7 will scare children out of their wits.