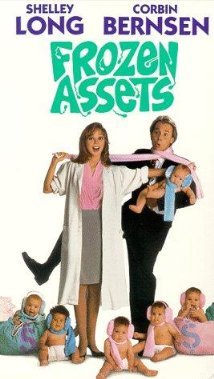 In FROZEN ASSETS, an ambitious yuppie named Zach Shepard transforms a non-profit sperm bank into a money maker by sponsoring a $100,000 “Stud of the Year Contest.” Helping him is Newton Patterson, an escapee from the National Psychiatric Institute, and Dr. Grace Murdock, the bank’s prudish director and biologist. Folks, it doesn’t get any stupider than this. Everyone in Hobart, Oregon, hopes to win the contest. The townsmen abstain from sex in order to conserve their sperm, frustrating their wives and putting the local prostitutes out of business. The race is on, and people predict that a man with eight youngsters will be crowned top stud. However, the sperm bank finds that he is sterile and his wife is a nymphomaniac. Also competing for the crown is looney-tune Newton, who fornicates with 33 different women. Meanwhile, Zach the opportunist lizard seduces Grace, getting her drunk on cheap wine and bedding her. Ultimately, we’re slapped with a hokey, sitcom-ish formula ending: All ends well, Zach and Grace fall in love and live happily ever after.

Contrived, pretentious and totally perverse, FROZEN ASSETS would be better off on ice… forever.