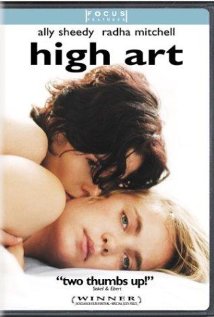 In HIGH ART, a young editor named Syd of FRAME magazine discovers a once-celebrated photographer, Lucy Berliner, living in the apartment above her. Lucy and Syd become closer and Syd gets pulled into the seductively decadent world of drugs and lesbianism. HIGH ART is an attempt to mainstream homosexuality and drug use, establishing them as acceptable and natural behaviors.

HIGH ART centers on the culture of the art scene in New York, and the hard life that many of these artists lead. The central female character, Syd (Radha Mitchell), gets caught up in the dark world of drugs and homosexual exploration. Syd has worked hard to get the Assistant Editor position at FRAME, a magazine showcasing new and cutting-edge photographers. Nevertheless, she still gets treated as an intern as she tries to break into the upper management ranks. Syd also has a live-in boyfriend, James. Though the relationship is stable, it is boring.

One night Syd is soaking in the tub and notices a leak coming from the apartment upstairs from her neighbor Lucy Berliner (Ally Sheedy). After fixing Lucy’s leaking pipes, Syd notices that the apartment is decorated with amazing photographs. (Lucy was a once-celebrated photographer that dropped out of the art scene ten years ago and lives with her drug-addicted German girlfriend, Greta, played by Patricia Clarkson.) Lucy and Greta also host many different hard-living friends, a lifestyle with apparent excitement for Syd.

Lucy is intrigued by Syd’s offer but does not want to come out of seclusion. The relationship that Lucy and Greta have is one of desperation and pity. They have been through many things together as a couple and are co-dependant on each other for drugs and excuses for their wasted lives. Greta is on drugs every day and prefers to surround herself with destructive people.

Meanwhile, Lucy seems to want to escape from that world. She goes to her Jewish mother for companionship and indirectly for advice. Lucy’s mother does not like Greta or the life she leads. Regrettably, her mother disapproves more of Greta’s Germanic descent than her sexual “orientation.” Her mother also enables Lucy to lead this life by providing her with the financial means to avoid taking responsibility for her life.

Lucy finally accepts an assignment for FRAME and goes to the country to shoot the story with Syd. There, the two women commit sodomy. During the weekend, Lucy also takes many pictures of Syd and herself. Syd comes home to an empty apartment, because James leaves her.

After the weekend, Lucy decides to go away to get drug treatment, but not before giving the pictures of their weekend to Syd. Lucy states that these are the pictures she wants to submit for the FRAME layout. Syd is very apprehensive, even though the pictures were artfully done, but the pictures are very personal and sensual. As Lucy goes away for rehabilitation, Syd delivers Lucy’s work. Lucy gets the cover, and Syd’s career is solidified. She comes to believe that career success sometimes requires uncomfortable sacrifices.

Lisa Cholodenko’s movie is a disturbing look at a small part of the art world in New York City. Her screenplay tries to play on the “heroin-chic” focus that is hip today. She gives a realistic view of what drugs can do to your life and does not exactly glorify the lifestyles of drug addicts. The problem with the movie is the positive light that it gives to homosexuality. That lifestyle is interpreted as a desirable one, if the relationship works. The movie’s original dialogue does not rely on the clichÈs which many movies on homosexuality use. Though shocking, the screenplay asks to be taken seriously. With excessive foul language, Lisa Cholodenko also shows her writing is a product of contemporary disenchantment.

Ally Sheedy performs commendably as Lucy Berliner. Even though the tragic role itself is unappealing, she plays it with quiet strength. Sheedy plays dark, but attractive, characters well, as evidenced by her role in THE BREAKFAST CLUB. Radha Mitchell’s relatively abbreviated role damages the film, because she has difficulty maintaining the necessary strength for a central character. She seems confused and unsure of how her character should be reacting to her surroundings. The most disappointing performance was Patricia Clarkson. Her bogus German accent was jumbled, and most of her lines were garbled. Even with some adequate performances, most of the characters were hard to like, because they were too tragic and sinful.

Even though Cholodenko states that this is not a film of a woman coming out, moral audiences will find this movie offensive and repulsive. No characters display redemptive characteristics. Though they try to escape a life of drugs, they do it through other sinful means. Lisa Cholodenko forces the lesbian lovers on the audience to the extent that even pagans would find the lesbian scenes excessive. She does not give any characters the chance to find redemption through anything other than drugs, homosexuality or their career. Even with some adequate performances from the central characters and some original dialogue, this story lacks any moral value.