"Sins of the Father" 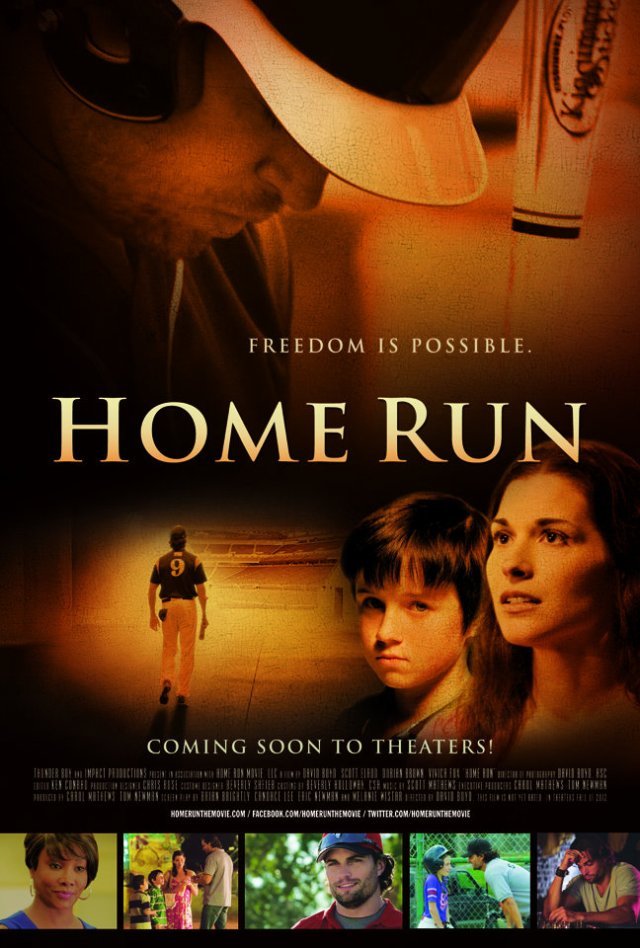 HOME RUN is about a star baseball player with alcohol problems. After an outburst during a game, Cory is required to return to his tiny Oklahoma hometown and participate in a 12-step program. Hosted by a church, the program focuses on Jesus. On the way home, Cory gets drunk and crashes his expensive sportscar into a tractor, almost killing his brother, Clay. Part of Cory’s recovery program is coaching a Little League team. Will Cory follow the 12-step program? Will he realize that he needs Jesus Christ?

HOME RUN is very well written. The dialogue builds surprises and develops character. The acting is good, especially Scott Elrod as Cory. Everything about this movie looks Hollywood. The plot solution is the 12-step program and accepting Christ. Although some dicey issues, such as sexual abuse and addiction, are discussed, the fact they are discussed and not shown slows things down a little bit. Even so, the director gives his movie an excellent sense of realism. HOME RUN has a powerful evangelistic message. Caution is advised for older children because of some adult material.

It opens with two little boys hiding a box full of baseball cards in a barn. Their drunken father, Michael Brand, drags them out of the barn and forces the older one, Cory, to try to hit fastballs. The father does everything he can to intimidate Cory, including telling him he’s week, feminine, awful, etc.

Years later, Cory is a star player for the Denver Grizzlies, but his wild ways, including hit and run, alcohol abuse and many misdemeanors, are getting in the way of his career. Finally, during a big game, he hits a home run, but misses the plate, gets angry at the umpire, and bloodies the batboy by mistake, who happens to be his brother’s adopted son.

Cory is clearly out of control. He gets suspended, but his agent does everything she can to make it appear he’s on the road to recovery. Cory’s required to return to his tiny hometown in Oklahoma and participate in a 12-step program. This program is hosted by a church and focuses on Jesus.

On the way there, Cory gets drunk and crashes his expensive sportscar into a tractor, almost killing his brother, Clay, a district attorney. Part of Cory’s recovery program is coaching the Little League team. The team not only includes Carlos, the batboy he bloodied, but also his illegitimate son, Tyler, who Cory has never seen.

Needless to say, Cory’s former paramour, Emma, another coach on the same team, dislikes Cory, and Clay’s wife, Karen, dislikes Cory because Clay is in the hospital in a neck brace. Evidently, Cory’s alcoholism reflects the sins of his father. His father was an alcoholic baseball player in the minor leagues, and he took his frustrations out on Cory.

Cory pretends to be part of the 12-step program, but secretly still gets drunk in his motel room. He does a great job of coaching the young boys, but this angers a local policeman and Cory slugs him, knocking him out. When Cory misses the call to go to Tulsa to participate in the All Star team, he tells a journalist he just wants to be with his family.

By now, Tyler has discovered Cory is his real father. Tyler’s stepfather died a couple years before. Emma’s furious about Tyler finding out, the town is up in arms, Cory loses his baseball job, and only Jesus seems to offer any hope.

Will Cory get with the 12-step program? Will he realize he can’t do it himself and needs Jesus Christ?

HOME RUN has a powerful evangelistic message that should be seen by everyone. Of course, there’s a caution for children because of the alcoholism, and some adult content.