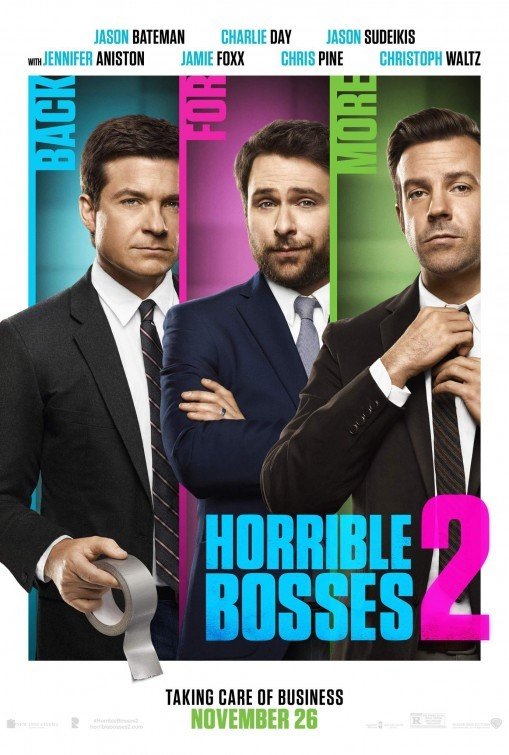 HORRIBLE BOSSES 2 is another unwanted sequel to its unnecessary predecessor. After trying and failing to kill their bosses in the first movie, Nick, Dale and Kurt have quit their jobs and become entrepreneurs so they can be their own bosses. Inventing a shower contraption called the “shower buddy,” the three guys get a billionaire, Burt Hanson, to place a large order for their invention. They take a loan and meet Burt’s order, but Burt double crosses them and changes his mind so they’ll go bust, and he can buy the company for almost nothing. With no options, the three buddies decide to kidnap Burt’s son, put up a ransom and save their business.

HORRIBLE BOSSES 2 is surprisingly unfunny for the amount of comedy stars attached. Though the main characters pursue American capitalist entrepreneurship, the movie pretty much says success comes from unethical business practices, not hard work. In the end, most of the manipulators and criminals are punished, but does not make the movie appropriate. The never-ending obscene language and disgusting lewd references make HORRIBLE BOSSES 2 an abhorrent movie.

(PaPaPa, B, C, Cap, AP, Acap, LLL, VV, SS, N, AA, DD, MMM) Very strong pagan, immoral worldview of characters who become criminals so they can make their lives a little better, only slightly redeemed by one character who refuses to sleep with a woman who constantly comes at him and a sex addiction meeting that starts with a prayer, plus a positive view toward capitalism and entrepreneurship mixed with a negative, unpatriotic view toward capitalism; more than 160 obscenities (including 110 or so “f” words), 22 profanities and many graphic sexual references and scatological jokes; strong violence includes two men are shot, and man beats himself up; brief depicted sex is seen in security figure with obscured nudity, plus many sexual references, including homosexual references, including discussions and hand gestures to self-abuse and oral sex; upper male nudity, multiple women wear revealing dresses and bikinis with cleavage; moderate drinking; no smoking but some drug references; and, lying, kidnapping, racism, blackmail, and men who are horrible role models.

HORRIBLE BOSSES 2 is another unwanted sequel to its highly unnecessary predecessor. After attempting and failing to kill their bosses in the first movie, Nick, Dale and Kurt have decided to quit their jobs and become entrepreneurs so they can be their own bosses. Inventing a shower contraption they call the “shower buddy,” the three friends present their new product on an L.A. news segment that goes horribly wrong.

Even though they failed on TV, they get a call from billionaire Burt Hanson who wants to invest in their company. When they meet with Burt and his spoiled son, Rex (Chris Pine), Burt places an order for 100,000 “shower buddies.” Completely over the moon for this breakthrough, Nick, Dale and Kurt get a loan, buy property and hire staff to fulfill the order.

After meeting their deadline, they approach Burt to tell him the good news, but Burt says he’s going to cancel the order. This, of course, will put Nick, Dale and Kurt in debt and in foreclosure so that Burt can take over the company for practically nothing. Desperate, the three guys seek some advice from some shady characters from their previous criminal activities.

Eventually, they decide to kidnap Burt’s son and hold Rex for ransom so they can get the money they need to save the company. When this goes horribly wrong as well, Rex decides to join them in their plan to fake a hostage situation so he can get some money as well. Led by the devious Rex, the three ignorant guys develop a genius plan they believe will foil the police and result in their payday. The only problem, of course, is their complete ineptitude.

HORRIBLE BOSSES 2 is surprisingly unfunny for the amount of comedy stars that are attached. Nearly every laugh revolves around inappropriate or disgusting sexual humor. The only real chuckles come from how bad the three guys are at being criminals. The movie never keeps one guessing, and the characters have no development or growth. In fact, there’s very little known about the protagonists at all, even two movies into the story.

Though the main characters pursue good ol’ fashioned American entrepreneurship, it’s pretty much said that success comes from unethical, manipulative, backstabbing business practices, not hard work. In the end, most of the manipulators and criminals are punished, but this in no way makes the movie appropriate. Also, one character is constantly pursued sexually by a woman, though he refuses to commit adultery and always resists her. The never ending obscene language and disgusting sexual references in HORRIBLE BOSSES 2 make this abhorrent movie something to avoid altogether.