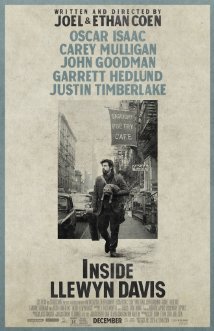 INSIDE LLEWYN DAVIS takes place in the Greenwich Village folk scene in 1961 New York City. It follows folk singer Llewyn Davis as he mooches off his friends while trying to survive as a musical artist.

INSIDE LLEWYN DAVIS is an odd, slow, bleak look at 1961 Greenwich Village, after the Kingston Trio hit it big but just before Bob Dylan and Peter, Paul, & Mary revived folk music. The writer and director brother team, Joel and Ethan Coen, convey the cold, grey lifestyle of the serious folk artist. Intentionally, they drop viewers in the middle of Llewyn’s life, with no proper beginning or end. This makes the movie longer and more tedious than it should be. Llewyn is an irresponsible jerk throughout the movie, learning nothing during his erratic week. He clearly adopts a Romantic worldview that many musical artists held to back then and still do today. Thus, Llewyn chooses to float in the wind, living day by day with no vision for the future. This, along with abundant foul language and an abortion subplot, make INSIDE LLEWYN DAVIS unappealing.

(RoRo, B, C, LLL, V, S, N, A, DD, MM) Strong romantic worldview portrayed in main character’s lifestyle, shown in such a bleak and unattractive way, but it could almost be seen as a morality tale, with some folk songs reference the “Lord”; Over 85 obscenities (including 55 “f” bombs) and 12 strong profanities (including several GD’s and JC’s), a man soils himself; man is punched in the face and kicked, a man has a seizure; woman discusses condoms crudely, one homosexual reference; man in his boxers; light alcohol use; heavy smoking and implied heroin use; and, a woman decides to get an abortion.

INSIDE LLEWYN DAVIS takes place in the Greenwich Village folk scene in 1961 New York City. The movie captures a week of the life of Llewyn Davis, a young folk singer trying to make a living.

The movie begins with Llewyn (Oscar Isaac) waking up in a friend’s apartment on a wintery New York City day. After a quick breakfast, he packs up his bag and guitar and heads out the door, but the house cat slips out of the apartment, and the door locks behind Llewyn. Not able to contact his friends, Llewyn takes the cat with him to keep it safe. With no money and no place to go, Llewyn dumps the cat at the home of his best friend and fellow folk singer, Jim (Justin Timberlake), and his wife, Jean (Carrey Mulligan).

Jean, an ex-lover, lividly tells Llewyn she’s pregnant, likely with his child. After a stream of insults and obscenities, she insists he pay for the abortion, and he agrees.

Now in need of money, Llewyn goes to the office of his music label to see if his first solo record is selling, but it’s not. He then travels to his sister to see if she can spare some cash after selling the family home, but she informs him all the money is going to pay for their father’s nursing home, which Llewyn never visits.

Still no money and no options, a timely message notifies Llewyn that a gig just opened up for playing backup vocals for Jim’s new single. Desperate for the cash, Llewyn opts to take $200 in cash rather than royalties. Llewyn continues his wandering, destroying and fixing relationships, hitchhiking with odd characters, and chasing after his friend’s cat.

INSIDE LLEWYN DAVIS is an odd, slow, and bleak look at 1961 Greenwich Village, taking place after the Kingston Trio hit it big in 1958 and 1959 but just before Peter, Paul, & Mary revitalized folk music with their cover of Bob Dylan’s “Blowin’ in the Wind.” The writer and director brother duo, Joel and Ethan Coen, masterfully convey the cold and grey lifestyle of the heartfelt folk artist. Intentionally, the Coen brothers drop viewers in the middle of Llewyn’s life, with no proper beginning or end. They even joke at one point in the movie’s production notes, “The film doesn’t really have a plot. That concerned us at one point; that’s why we threw the cat in.” Likely making an artistic statement by abandoning typical story structure and pacing, the Coens will lose a large portion of their audience with this tedious movie. Though there are many scenes that are comical, captivating, and soulful, INSIDE LLEWYN DAVIS is not as engrossing as it could be.

Also, Llewyn is an irresponsible jerk at the beginning and the end of the movie, learning nothing during his erratic week. Clearly adopting a Romantic worldview that many musical artists held to back then and still do today, Llewyn chooses to float in the wind, living day by day with no vision for the future. This is part of the protagonist’s nature and it’s shown in a very depressing, unappealing way. Thus, once could argue Llewyn’s story is a morality tale of such a worldview. This feeds into the fruit of such a lifestyle, as shown in the unplanned pregnancy and the plans to murder the baby without a second thought. That said, the unappealing story, the abortion subplot, and the abundant foul language ultimately make INSIDE LLEWYN DAVIS unacceptable viewing.