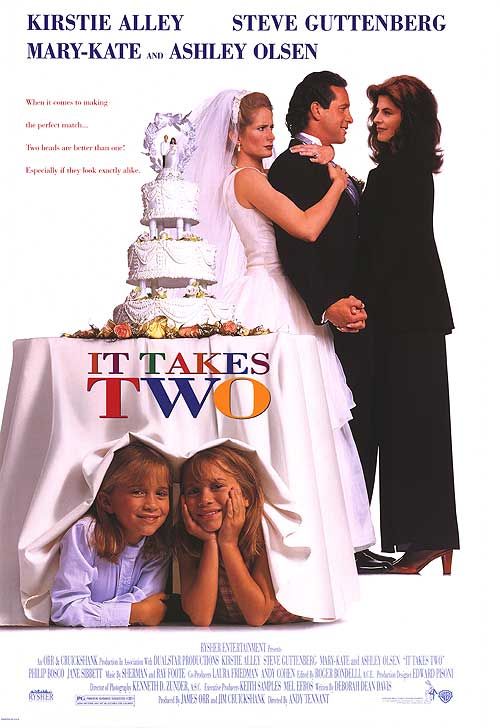 IT TAKES TWO tells the story of two identical girls living at the extremes: one is rich; the other is an orphan. They switch places in order to stop the rich girl's father from marrying a woman he doesn't love, so they can pair him with the orphan's case worker. The movie is innocuous fun for families with small children, especially girls.

(Ro, L, A) Romantic worldview of two identical girls able to bring together their respective "parents" romantically despite several obstacles; 1 obscenity, 1 vulgarity & 2 profanities; alcohol use implied; and, no sex, no nudity & no violence

IT TAKES TWO tells the story of identical girls living at extremes: one is rich; the other is an orphan. Starring the Olsen twins, the movie weaves an idealistic tale where a child’s fantasy of picking their parents comes true. Amanda Lemon is an orphan. Her case worker, Diane Barrows, would like to adopt Amanda but the “system” says no. The children’s home is spending a week at a camp founded by Roger Callaway’s deceased wife. Roger is engaged to Claris, a woman he doesn’t love, and has a daughter identical to Amanda named Alyssa. Together, the Amanda and Alyssa execute plans to stop Roger from marrying Claris and instead marry Diane.

The movie is a cute fantasy where identical young girls of diverse means are able to switch places and fix their family woes. (In that sense it is a modern PRINCE AND THE PAUPER.) The tale is fairly clean allowing children to see this without the worry of parents. There is no violence, sex or harsh language. However, the movie is pure fantasy taking leaps of believability. The Olsen twins, fresh from FULL HOUSE fame, eager to strut their comedic twin-power, carry off a delightful movie. Despite a fantasy storyline, the movie IT TAKES TWO is a sweet, innocent film of two girls looking for a family.

Rent or Buy IT TAKES TWO: