JOSIE AND THE PUSSYCATS 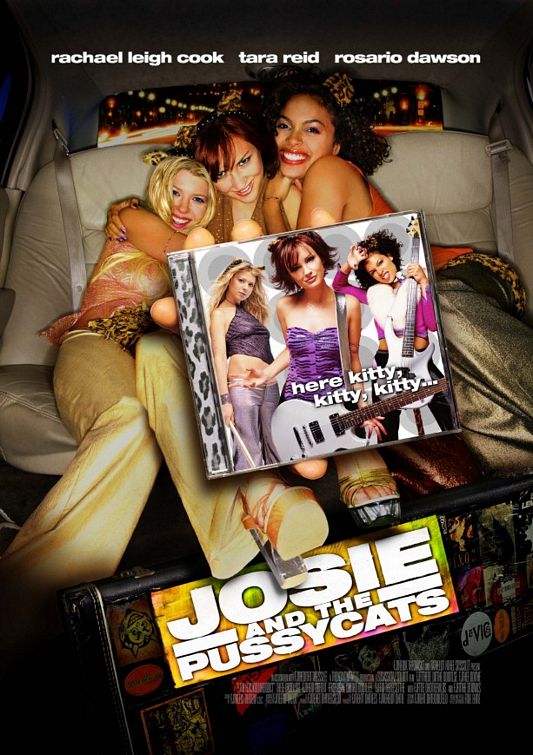 JOSIE AND THE PUSSYCATS is a fun but superficial comedy based on the Archie comic book. Three small town friends dream of being rock stars and hit it big when MegaRecords wants to sign them to the label. The Pussycats suddenly become Josie and the Pussycats and the girls are rushed from photo shoots to parties and recording sessions, while their songs rise on the charts. Instant fame piques the girls’ curiosity, and they soon discover that their new manger, Wyatt, and the CEO of MegaRecords, Fiona, are up to no good. The two have been putting subliminal messages into the music to brainwash the youth of America. Josie, Melody and Valerie must hold true to the bonds of friendship as fame and power threaten to tear them apart.

Despite dealing with a few important positive virtues such as genuine friendship and uncovering evil, JOSIE AND THE PUSSYCATS lacks depth and contains some foul language and sensuality. It also has a tacky feel to it, and there are blatant advertisements in nearly every scene. Still, the story is full of humorous antics and takes a hilarious swing at the popularity of boy bands.

(Pa, B, Fe, LL, V, M) Pagan worldview with some moral elements about three girls who care about each other & who want to become famous rock stars, combined with a mild feminist spirit; some language, including 11 strong obscenities, 5 mild obscenities & 7 profanities; some action violence, including boys are in plane crash when man attempts to kill them, man purposely smashes woman’s foot, two men try to kill girls, two men get knocked out, two women fight, & girls fight with men; no sex, but some sensuality; no nudity but midriffs shown for the sake of sensuality; no alcohol use; no smoking; and, miscellaneous elements such as lying, deceitfulness & brainwashing.

JOSIE AND THE PUSSYCATS is a live-action comedy based on the Archie comic book. Three best friends, Josie (Rachael Leigh Cook), Melody (Tara Reid) and Val (Rosario Dawson) have one dream – to be rock stars. The dedicated musicians have formed a unique band called The Pussycats in the small, suburban town of Riverdale. Although no one comes to their gigs, their manager is a joke and the band’s biggest fan is Josie’s best friend Allen M., the struggling team keeps at it, playing everywhere they can and being criticized for their distinctive fashion and musical technique. Their one wish is to sign with a record company and be taken seriously by people.

When the country’s hottest boy band, Du Jour, mysteriously disappears, their manager, Wyatt Frame (played by Alan Cumming of SPY KIDS) searches for “the next big thing.” He stumbles on The Pussycats and soon is presenting them to MegaRecords CEO, Fiona. Suddenly, the girls’ dream is becoming a reality. Within a week, The Pussycats are renamed Josie and the Pussycats, everyone is wearing cat ears, and the three small town friends are rushed from photo shoots to recording studios, MTV tapings and parties held in their honor. Fiona and Wyatt create a rock sensation as the girls’ songs top the music charts.

Josie, Melody and Val soon begin to be suspicious of their sudden fame. How did they become so popular so fast? It is soon discovered that Fiona and Wyatt are really using MegaRecords as a front for a high-tech, underground outfit and influencing the youth of the country through popular music. They have been putting subliminal messages in Josie and the Pussycats’ music and are even trying to brainwash the girls in the band.

When the girls begin to understand what has been happening, Wyatt and Fiona plan to separate the band, making Josie an even bigger sensation, while destroying the other two Pussycats. The plot thickens as Mel and Val are in danger of their lives, and Josie is being brainwashed, along with the rest of the teenagers in America. The three rock stars must use the power of friendship to get themselves out of this mess.

JOSIE AND THE PUSSYCATS is full of humorous antics and comedic acting, mostly from the evil adversaries, Fiona and Wyatt. The movie takes a hilarious swing at the boy band uprising, but there are blatant advertisements in almost every scene.

While JOSIE is based on the Archie comic book series, the plot of the movie takes a number of awkward turns, making it progressively tackier as time passes. Dealing with important virtues such as genuine friendship, love, following a dream, persistence, taking initiative, uncovering evil, and being true to yourself, this movie had potential to be a much better movie. However, it is obvious that a movie lacks substance and depth when, at the end, a character actually has to say, “The moral of this story is . . .” The movie also contains some foul language and sensuality.

Rent or Buy JOSIE AND THE PUSSYCATS: