"We Are All One in Christ" 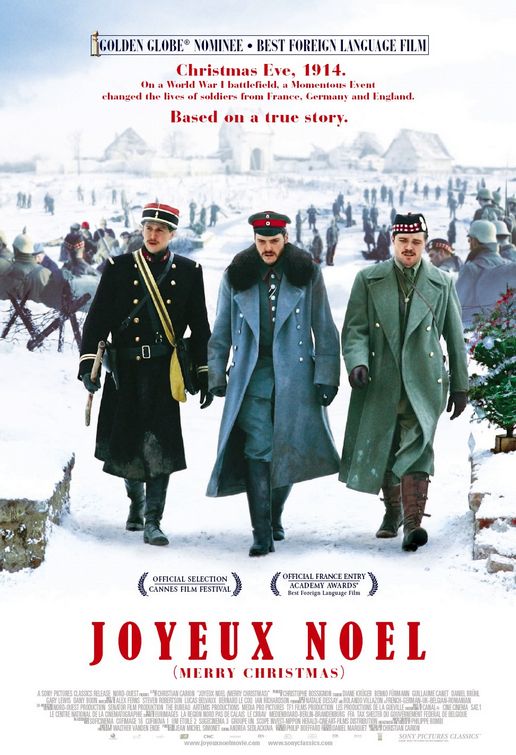 JOYEAUX NOEL, or MERRY CHRISTMAS, is an international production about the Christmas armistice between the Allies and the Germans in World War I in 1914. It tells what happens when a group of French, Scottish and German soldiers decide on their own to call a truce on Christmas Eve to celebrate the birth of our Lord, Jesus Christ, and share some Christian brotherhood. Even a German Jewish officer is moved by the Catholic mass and singing that occurs during the Christmas celebrations. The war, however, eventually intrudes on the celebration.

The Christmas scenes in this movie are among the most beautiful and most powerful ever put on film. A Dutch opera singer on the German side sings both "Silent Night" and "Come All Ye faithful," and his Dutch wife sings "Ave Maria" during the Catholic mass. These scenes will bring most discerning viewers to joyful, sublime tears. MERRY CHRISTMAS is a thought-provoking, wonderful movie that overcomes its shortcomings. Only some brief foul language, a bedroom scene between the married opera singers and some pacifist, antinomian sentiments require caution. Otherwise, this is a great movie that probably should win the Oscar for Best Foreign Film.

(CC, BBB, FR, Ro, Ab, LL, V, SS, N, A, D, M) Very strong Christian worldview with very strong moral elements that focuses on the true meaning of Christmas and that includes Christmas carols about Jesus, a statue of Mary with Jesus as a child, a Catholic mass with references to Jesus and the Crucifixion and the Resurrection, woman sings "Ave Maria," a soldier rejects another soldier's atheist mockery of a Christmas worship service in brief dialogue, but with a few antinomian, Romantic elements suggesting rebellion against authority, pacifism and anti-clerical sentiments where an honorable Catholic priest and his venal, blasphemous bishop have an argument that causes the priest to quit his priestly vocation but not necessarily his Christian calling; 13 light obscenities, three strong profanities and Catholic bishop blasphemes the Gospel by basically telling new military recruits in World War I that they must kill enemy soldiers for Jesus; some light war violence such as soldiers storm trenches, machine-gun mows down soldiers, soldiers shoot at one another, and explosions, but violence is reminiscent of older war pictures during the Golden Age of Hollywood; man and wife depicted in bed together having implied intercourse under covers, with woman's naked shoulders and man's naked back exposed; upper male nudity; alcohol use; smoking; and, light suggestions of total pacifism and rebellion in movie could lead some viewers argue in favor of total rebellion against authority in time of real war, military desertion or protests against any and all use of military force.

JOYEAUX NOEL, or MERRY CHRISTMAS, is an international production about the brief Christmas armistice between the Allies and the Germans in World War I in 1914. It has some of the most uplifting and most powerful Christmas scenes ever put on film, but there are a few problematic elements that require caution.

The story focuses on two Scottish brothers, a Scottish Catholic priest, a French lieutenant and his batman, a German officer who’s also a Jew, and two married Dutch opera singers in Germany who are separated when the man gets called to the front. After a brief introduction, the French and Scottish soldiers storm the German trenches before Christmas, but are repulsed.

On Christmas eve, Nikolaus, the opera singer, gets called to headquarters behind the lines sop that he and his beautiful wife, Anna, can sing for the Crown Prince of Germany. The horrors of the war have scarred Nikolaus emotionally, and he almost can’t sing at all, but Anna’s encouragement helps him get through their performance in a really beautiful way.

After making love with his wife, Nikolaus decides to return to the German trenches to sing for his fellow soldiers. Anna demands to go with him. She won’t take no for an answer.

On the front, the German soldiers have all been given little Christmas trees with candles on them. As Nikolaus, Anna and the German soldiers celebrate Christmas, the Scottish troops sing a lovely song about home and going home to the strains of their bagpipes. Inspired, some German soldiers put their lit Christmas trees on top of their trench. Equally inspired, Nikolaus starts singing “Silent Night” in German. Then, while he is singing, he marches slowly out of the trench and picks up one of the lit Christmas trees. He places the tree in the middle of No Man’s Land and finishes the song. Soon, all the soldiers on both sides are coming out of their trenches, singing “Come, All Ye Faithful” with Nikolaus, sharing pictures of family, sharing Christmas goodies, and even celebrating Catholic mass with the Scottish priest.

This sequence is simply one of the most beautiful, inspiring, and most Christian sequences ever put on celluloid. It has moments of intense drama, sublime joy, and magnificent eloquence. If you don’t weep during this cinematic highlight, then you don’t know the true meaning of Christmas and should ask your doctor to check if your heart is still ticking.

After the mass and after Christmas day, the generals on both sides order that the war commence. Their troops are reluctant, however. In fact, the soldiers in the Christmas Eve sequence decide to protect one another from scheduled artillery bombardments. Word of such disobedience gets back to the generals. The generals also learn that many soldiers are writing letters back home telling their loved ones about the unofficial Christmas truce and the kind soldiers they met on the other side during it.

An unexpected tragedy reminds the French, German and Scottish soldiers of the horrors of war. The French lieutenant helps Nikolaus and his wife desert Germany so they can return to Holland. Meanwhile, the Scottish priest is reprimanded by his bishop for celebrating mass with the Germans. The Scottish priest tells the bishop, however, that the mass was the most important mass he ever did. Of course, the German officials send the Jewish officer and his men to the miserable Russian front. In a scene looking forward to the Holocaust, the officer and his men are piled into a dirty boxcar and shipped away.

The photography in MERRY CHRISTMAS is absolutely beautiful. Though the movie is slow at times because it is shot in a straightforward, sometimes stodgy, way, it becomes incredibly compelling as the story unfolds. And, what a story this is!

The story clearly and gracefully brings out the true meaning of Christmas, especially in the two Christmas carols sung in German, and the powerfully reverent Catholic mass performed by the priest and the soldiers. This meaning is echoed by the scenes of brotherhood displayed among the soldiers. At the end of the mass, Anna sings “Ave Maria,” and the hymn has never been performed more beautifully, or performed in a more beautiful context. The tragedies and stories that unfold after this Christmas Eve sequence are made even more compelling, poignant and meaningful within the context of this Christian brotherhood among the troops.

There are a few minor problems with the movie, however. There is some brief foul language, including a couple strong profanities. Also, there is a scene with Anna and Nikolaus in bed. Furthermore, although it seems as if they are married, they don’t share the same last name, and the movie is ultimately unclear whether these are just their stage names. A second viewing might clear up this confusion, but we have given the movie the benefit of the doubt here.

Finally, though the Scottish priest and the other Christian soldiers are heroic, the Catholic bishop is not. In fact, he is portrayed as a venal hypocrite. In one follow-up scene, he even gives a short mass before some new Scottish recruits and he tells the recruits that all the Germans are totally evil and that Jesus Christ Himself would want them to kill as many Germans as they can. Of course, this blasphemy is rejected by the movie and by the Scottish priest, who gives up his priestly Catholic office.

Thus, although this is a very pro-Christian movie about Christmas, the filmmakers may be a bit more anti-clerical and antinomian than they needed to be. Of course, there’s bound to be some wacky leftists, atheists or liberals who will use these scenes, and the rest of the movie, to make fallacious arguments against all organized religion and against all wars. One thing’s for sure, however: the filmmakers have crafted a brilliant, thought-provoking movie that’s sure to stand the test of time.

In the final analysis, it’s always good to recall these two enlightening passages from Scripture:

“There is neither Jew nor Greek, slave nor free, male nor female, for you are all one in Christ Jesus” – Galatians 3:28.

“Through the gospel the Gentiles are heirs together with Israel, members together of one body, and sharers together in the promise in Christ Jesus.” – Ephesians 3:6.