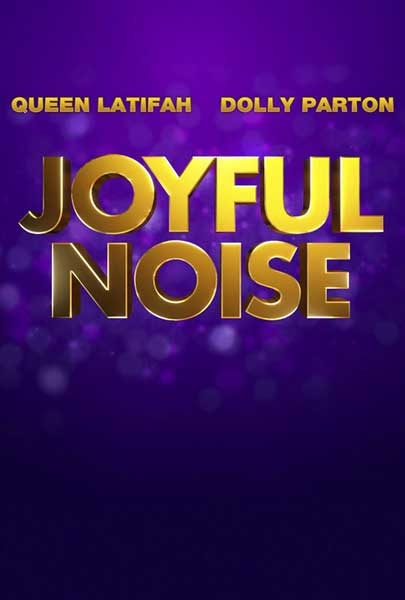 JOYFUL NOISE stars Queen Latifah and Dolly Parton as two women fighting over control of a gospel choir. Latifah is Vi, a mother of two who had to work hard to become choir director because G.G. Sparrow, Dolly Parton’s character, also fought for the job. Vi and G.G. also battle over the choir’s direction. Vi has a very traditional view for Gospel music, while G.G. wants to bring in her more secular grandson, Randy. Randy thinks the choir should do more contemporary songs. He also falls for Vi’s daughter, which causes more conflict. The choir continues to practice for a big competition, but the pastor is thinking about shutting it down because it’s never won a competition. Will they be able to make a joyful noise in the midst of all their conflict?

JOYFUL NOISE is a cheerful, toe-tapping musical with some funny, heartwarming moments. It has strong, positive representations of Christian faith, including prayers to Jesus. However, it also has some questionable elements and contradictory statements about Christianity and tradition. JOYFUL NOISE is an entertaining, uplifting movie, but caution is required for the more questionable elements, including some foul language.

(CCC, BB, Ro, LL, V, S, N, M) Very strong Christian, moral worldview, including prayers to Jesus, comments of giving Glory to God, charismatic gifts including tongues, marred by some Romantic worldview elements of following your heart and rebellion; 21 obscenities, two profanities; main character gets in fight and motivates another character to fight as well, plus mother slaps daughter; implied sex outside of marriage and kissing; upper male nudity, but modesty is extolled; no alcohol use; no smoking or drug use; and, dysfunctional families, lying, daughter talks back to mother numerous times, troublemaker love interest runs away with girl to meet her father but returns.

JOYFUL NOISE is a cheerful take on a gospel choir’s attempt to win a prestigious competition. Though JOYFUL NOISE does have some positive representations of Christian faith, it also has some questionable elements and multiple plot lines.

Queen Latifah plays Vi Rose Hill, a mother of two who’s become the choir director of the Divinity Church Choir. Vi worked hard to take the spot as director of the choir because G.G. Sparrow, played by Dolly Parton, also fought to have it. Overcoming rivalry, G.G. and Vi have to learn to work together. Both women have different ideas about how to run a choir, however. Vi has a very traditional view for Gospel music, while G.G. wants to bring in her more secular grandson, Randy.

Randy is known to be a troublemaker and has an interest in Vi’s daughter, Olivia. Both are in the choir. Starting to have a bit of a romance, Randy takes Olivia to a club, which is out of Olivia’s comfort zone, coming from a sheltered church background. This leads Olivia to develop a rebellious attitude toward her strict mother, so they get into numerous fights with each other.

This is not Vi’s only problem. Her husband has left the family, and Vi has to take care of her son Walter who has Asperger’s Syndrome. Walter ends up questioning God because of his disease, but Vi tries her hardest to lead him back to the faith, which Walter never confirms.

[SPOILERS FOLLOW] The choir continues to practice for their big competition, but due to the economy and the fact the choir has never won, the lead pastor, Dale, has thoughts to shut it down. Thinking that changes to the choir can win the competition, Randy tries to convince everyone to sing more modern songs and not the traditional songs Pastor Dale requests. This creates a bit of a stir between the choir, Vi, and Pastor Dale, leading Vi to quit, because she thinks the modern songs are not focused as much on the Lord. At the same time, Pastor Dale decides to take the church’s sponsorship away from the choir. Will they be able to make a joyful noise in the midst of all this conflict?

JOYFUL NOISE does have some very good faith elements, including Queen Latifah singing a wonderful song called “Jesus Fix Me” and crying out in a prayer. There are also numerous other references to faith in Jesus. At the same time, however, Queen Latifah’s character is strict and “righteous” because she’s so traditional in her sensibility, which is seen in a negative light. The choir goes toward a more progressive attitude as they develop songs that have direct correlation to modern pop songs but are modified to have gospel lyrics. Overall, Queen Latifah is fighting for faith while most of the other characters tend toward a more rebellious attitude, with her character’s son questioning God and her daughter wanting to branch out from being a “church girl.” Also, a choir member stresses the importance of a sexual relationship.

JOYFUL NOISE is an entertaining film with some very energetic, talented and fun musical scenes, along with some heartwarming elements. Having multiple plot lines, the overall plotlines sometimes become obfuscated. For example, the movie’s scenes go from the son with Asperger’s, the rebellious teenaged girl, the troublemaker, the women who wants a sexual relationship, the pastor rejecting the choir, the mother taking on multiple jobs to support her family because her husband leaves, and so forth.

Overall, JOYFUL NOISE is an entertaining, uplifting movie that will have viewers singing along, but families should be cautious about some elements, which include foul language.

“Make a joyful noise unto the LORD, all ye lands. Serve the LORD with gladness; come before His presence with singing. Know ye that the LORD he is God. It is He that hath made us, and not we ourselves; we are His people, and the sheep of His pasture. Enter into His gates with thanksgiving, and into His courts with praise. Be thankful unto Him, and bless His name. For the LORD is good; His mercy is everlasting; and, His truth endureth to all generations.”