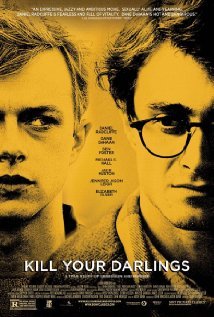 KILL YOUR DARLINGS tells how a little-known murder played a major role in bringing the writers and poets of the “Beat Generation” movement together in the 1940s. The story shows a naïve and virginal Allen Ginsberg, the famous poet, arriving at Columbia College. Ginsberg secretly swoons for his roommate, Lucien Carr, an extravagantly rebellious young man who uses every opportunity to mock professors and defile the classics taught in their classes. Along the way, viewers see Ginsberg encouraged to engage in drug and alcohol abuse by his new friends, including Jack Kerouac of ON THE ROAD writing fame. Eventually, Carr stabs to death another, older male friend during a sexual encounter.

(PaPaPa, PCPCPC, HoHoHo, LLL, VVV, SSS, NN, AAA, DDD, MMM) Very strong pagan, politically correct, pro-homosexual worldview; at least 48 obscenities (including some “f” words) and profanities (including some strong profanities); one violent incident but it’s a graphic yet relatively bloodless repeated stabbing of a man because of his homosexual abuse of a younger man; extreme sexual content includes graphic homosexual sex scene and other quick scenes of men kissing passionately plus much discussion of sexual affairs and double lives, as the homosexual men use marriage as a cover for their secret lives; upper and rear male nudity during graphic homosexual scenes; alcohol use and abuse justified as a a means to fuel creativity; tobacco smoking and drug abuse is shown throughout the movie and justified as a means of creative enlightenment; and, extreme miscellaneous immorality includes destruction of property as one major scene shows the “heroes” destroying hundreds of classic books by tearing pages out and cutting them up to form a collage that they deem better than the classics they just destroyed and rampant disrespect for authority as these young men mock their college professors and artistic traditions.

KILL YOUR DARLINGS is a well-made but thoroughly debauched true story of how a little-known murder played a major role in bringing the writers and poets of the “Beat Generation” movement together in the 1940s. KILL YOUR DARLINGS has a strongly pagan, politically correct worldview with very strong and explicit homosexual behavior.

The movie follows the story of the rise of the Beat Generation writers and poets through the eyes of famed perverse poet Allen Ginsberg (played by Daniel Radcliffe of the Harry Potter movies). It shows how a naïve and virginal Ginsberg arrives at Columbia College in New York and secretly swoons for his roommate, Lucien Carr (Dane DeHaan). Carr is an extravagantly rebellious, charismatic young man who uses every opportunity to mock professors and defile the classics taught in his courses. (Historians believe Carr was a kind of young mentor to Ginsberg and the other founders of the Beat Generation.)

Along the way, viewers see Ginsberg encouraged to engage in drug and alcohol abuse by his new friends, including Jack Kerouac of ON THE ROAD writing fame and the notorious writer William S. Burroughs. There’s not much of a linear story to the proceedings, as it shows these young men basically partying and writing their self-absorbed creations. However, the movie’s real theme seems to be showing that they are almost all repressed, closeted homosexuals due to the timeframe of the movie being the 1940s. Thus, the story focuses on the clandestine affairs they have together and the means they use to hide them.

(SPOILERS FOLLOW) The story reaches its climax when Carr, Ginsberg’s roommate, becomes so frustrated while being used sexually by an older male friend who’s also infatuated with Carr. Carr winds up threatening the man with a knife. The man then shocks Carr by asking to be stabbed to death, with the implication being he wants to end the misery of his secret homosexual existence. Carr indeed stabs him repeatedly during a montage that intercuts with a graphic sex scene where Ginsberg has homosexual sex for the first time.

Carr asks Ginsberg to help him hide the murder by tarnishing the victim, but Ginsberg refuses. The movie ends with a scroll of credits spelling out each man’s fate, including that Carr got a very short sentence since he was able to convince the jury that he killed the man in defense against unwanted homosexual advances. Carr went on to get married and tried to deny his past homosexual ties.

KILL YOUR DARLINGS is well acted and filmed, with some impressive sequences, including a startling drug-trip scene in which the actors in a nightclub freeze on the spot and are manipulated by others to move in certain ways before coming back to life. But, parents need to be aware that just because the actor who played Harry Potter (Daniel Radcliffe) is in it, this is absolutely not a movie for children or teenagers, or frankly anyone with moral discernment.

The rampant homosexual behavior throughout the movie, combined with the frenetic abuse of alcohol and drugs, makes KILL YOUR DARLINGS an utterly amoral and pagan affair. The movie does show that the young men involved in these duplicitous lives were miserable, yet the movie still is graphic and accepting in its depiction of homosexuality and its sex acts. An interview with the director in another publication revealed that he had an agenda to make the sex acts be as “realistic” as possible.

KILL YOUR DARLINGS is a movie that should have been killed off rather than financed. Ultimately, it displays an abhorrent, juvenile attitude of complete disrespect for authority, traditions, and conventional morality.

Of course, God condemns all sex outside of monogamous heterosexual marriage as evil in Leviticus 18:1-30, as does Jesus Christ in Mark 7:20-23. See also Christ’s description of how God defines marriage in Matthew 19:1-12.