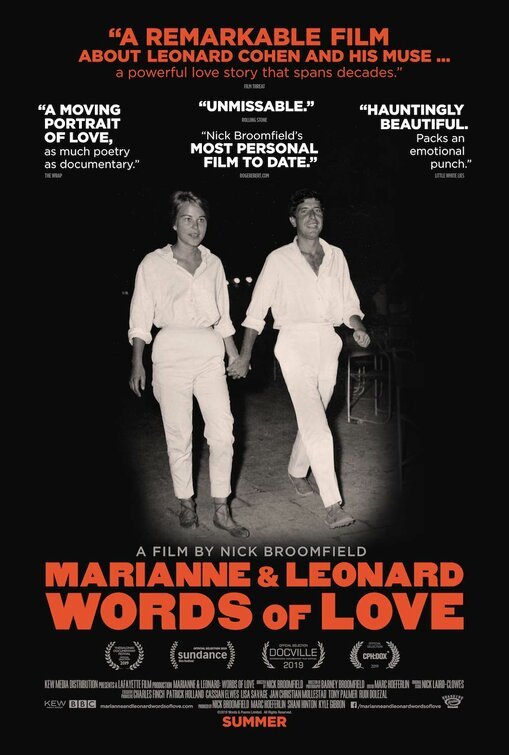 MARIANNE & LEONARD: WORDS OF LOVE shows archival footage and photographs from the 1960s when Canadian singer and songwriter Leonard Cohen met a beautiful Norwegian woman named Marianne. Abandoned by her husband in 1960, the young mother became the first muse to Cohen’s music career. Their relationship wasn’t monogamous, though they always seemed to get back together until Cohen had two children with another woman in the 1970s, and Marianne remarried in 1979. Often compared to Bob Dylan, Cohen never forgot his first love, even writing to her when she was dying in 2016.

WORDS OF LOVE could have been shorter, but it’s an engaging look into Leonard Cohen’s life and career and his time with Marianne. However, the life they lived, as well as the people with whom they associated, was immoral and included drugs and sex. In fact, some people’s lives were completely destroyed, with Marianne’s son having drug and mental health problems. WORDS OF LOVE does show that immorality has negative consequences, but it presents a superficial view of Cohen’s beliefs, which were Jewish mixed with Buddhist and Christian teachings.

(RoRoRo, RHRH, FR, L, V, SS, NNN, AA, DDD, MM):
Dominant Worldview and Other Worldview Content/Elements:
Very strong Romantic worldview where the people featured follow their own desires whether it be sex or drugs all in the name of art and artistic expression, everyone justifies the actions of the featured people by blaming it on the time period being the 1960s which was the time of open relationships and heavy drug use, there is no mention of God, and no morality that guides anyone, although the movie does show how this lifestyle and the actions of the people involved created extremely negative repercussions including families being torn apart and people regretting the flippancy with which they lived before, plus some revisionist history where movie skips over the title character’s Jewish beliefs and fascination with Jesus to only discuss the man being mentored by a Buddhist monk
Foul Language:
Three obscenities, including one “f” word, and one obscene gesture
Violence:
No actual violence shown but references to abortion and to a woman who commits suicide
Sex:
Frequent sexual references, though mot shown, many people mentioned in the documentary have multiple lovers and fornicate with whomever they feel like it at the moment, this behavior is excused as just being “part of the 60’s” and also excused because a person is an artist and can’t be had by only one person, lyrics are broken down that include crude remarks about oral sex, and a woman gets pregnant out of wedlock and has an abortion
Nudity:
Brief full female nudity but shown from a distance and isn’t very clear, brief upper female nudity, multiple scenes showing nude beaches where there is rear male and female nudity, upper male nudity and women in swimsuits, and man is shown swimming regularly in the nude
Alcohol Use:
People are shown having alcoholic drinks on occasion, and there’s mention of being drunk at times, but it isn’t shown
Smoking and/or Drug Use and Abuse:
Smoking in archival footage and photos, heavy drug use includes people using “speed,” LSD, marijuana, and another hallucinogen referred to as “Desert Dust” that someone says would cause them to have a 14-hour experience, and they took it for 23 nights in a row, and a young man recalls acid being dropped into his drink when he was 13 without his knowledge and people were drugging some donkeys;
Miscellaneous Immorality:
Strong levels of moral relativism and dysfunctional families, a woman abandons her son in order to follow different lovers across the world causing her son become a drug addict and to be institutionalized for the majority of his life, and a family is torn apart by the immoral lifestyle showcased in the movie, and the mother goes on to commit suicide with her children dying from drug and alcohol abuse.

MARIANNE & LEONARD: WORDS OF LOVE is a documentary about the romantic relationship and friendship between an acclaimed Canadian writer, songwriter and performer and a Norwegian woman.

The movie begins in 1960 as two young people spending time in the Greek island of Hydra meet and begin a long journey together. Marianne Ihlen was a very blonde Norwegian girl full of youth and life, enjoying swimming in the warm Mediterranean waters. Leonard Cohen was a Jewish Canadian author with a three page a day deadline for writing two novels. Leonard was also using hallucinogenic drugs to write, because he believed it helped inspire and “expand” his mind. When they met, it was muse at first sight, and Cohen wrote a song for Marianne that would eventually become one of his greatest hits.

Marianne already had a young son named Axel from her previous marriage (her husband abandoned her and their son for another woman). Leonard loved Axel as his own, and they became a sort of family. However, with it being the 1960s, there was little respect for any kind of commitment, and although they were romantically involved, they both had other lovers as well.

Cohen finally published BEAUTIFUL LOSERS in 1966, and it was widely regarded as one of the worst books of all time. Many critics saw it as unintelligible, and many intellectuals tried to dissect it, but were unable to do so (it has since gained much praise, however, for its innovative quality).

Although Cohen couldn’t play guitar and didn’t consider himself a musician or singer, he began to write things that he wasn’t even sure were songs. Having moved to New York City in 1966 to explore the folk-rock scene, he consulted a musician friend of his in 1966 and sang to her a piece of what he wrote, a song called “Suzanne.” This friend, a popular singer songwriter at the time named Judy Collins, recorded “Suzanne,” which became a big hit for her, and began to sing it at her concerts.

This encounter with Judy changed both Cohen and Marianne’s life. At one point, Judy forced Cohen to come out on stage and sing the song himself. However, in the middle of the song, he was overcome by stage fright and had to walk away. When he finally was able to come out on stage and really sing, though, he was immediately snatched up by a big record label, and his longtime music career began. At the same time, his relationship with Marianne was changing. Although she remained his muse, he continued to have even more relations with other women, staying with Marianne and her son at times and sometimes staying elsewhere.

As Marianne followed Cohen around the world on his tour, her son was neglected and suffered because of it. Eventually, her son turned to drugs and spent the majority of his life in a mental institution.

Meanwhile, Cohen and his entourage toured everywhere rarely sober, never giving the chance for a hangover because they would just continue doing more things. Leonard also began a serious relationship with another woman who also had a young son, who eventually came to Hydra to kick Marianne and her son out of the house.

In the 1970s, Cohen had a long relationship with a third woman, with whom he had two children, a son and a daughter. In 1979, however, she broke up with Cohen, who admitted he was too cowardly and fearful to marry her.

Meanwhile, Marianne married a Norwegian man in 1979. She returned to Norway and truly blossomed. Then, when she was on her deathbed in 2016, she received a heartwarming love letter from Cohen, telling her he’s not far behind her and adding, “I’ve never forgotten your love and your beauty.” They died only months apart, after an adventurous life full of love, pain, regret, and art.

Although this story could have been told in a shorter, more concise manner, MARIANNE & LEONARD: WORDS OF LOVE is a fascinating and engaging look at the private life and career of Leonard Cohen, who’s often mentioned in the same breath as Bob Dylan when it comes to influential songwriters of the 1960s. However, “Hallelujah,” Cohen’s most well-known song, isn’t touched on until the very end. The movie reports that the song was initially thought of as a complete failure.

After watching WORDS OF MUSIC, it’s amazing that Leonard Coehn managed to live such a long life, considering the amount of illicit substances and alcohol that filled his body for much of his life, not to mention the countless affairs he had. Even so, the filmmakers seemed not to have had quite enough material to fill the movie’s entire 102 minutes, so the movie does feel like it drags at times.

WORDS OF MUSIC has a strong Romantic worldview. The entire motivation for the people in the movie seems to have been being the pursuit of personal artistic expression, whether that means doing drugs or having multiple lovers. The people who are the subject matter display an almost total lack of morality, showing a lifestyle without any guide for right and wrong. The filmmakers do little to counteract this abhorrent message, though people do express some regret about the flippancy with which they lived in the 1960s. Also, the movie does show some negative consequences to the past immoral behavior being discussed. That said, the overall message in MARIANNE & LEONARD: WORDS OF LOVE is rather abhorrent.

Strangely, the movie never mentions the fact that, according to the New York Times and other sources, Cohen was a Sabbath observant Jew all his life. Despite his Jewish faith, he saw no conflict between his Judaism and his practice of Zen Buddhism, which began in the 1990s. Apparently, to Cohen, Buddhism was more of an attitude than a religious practice. In fact, he claimed it helped cure him later on in life of his frequent bouts of depression. Thus, his songs are filled with both Buddhist, Jewish and biblical references. They also contain references to Jesus Christ. In interviews, Cohen often expressed fondness for Jesus, especially His moral teachings in the Sermon on the Mount. Of course, the teachings of Jesus are more than just a bunch of moral and ethical aphorisms. Furthermore, Jesus also condemned extramarital sex, stealing, murder, slander, and other immoral behavior in the New Testament. In a 2007 radio interview with the BBC, Cohen said that, despite his sexual promiscuity and past drug use, he and his two children practice Judaism. “The investigations I’ve done into other spiritual systems have certainly illuminated and enriched my understanding of my own tradition,” he said. So, ultimately perhaps, the final words of Cohen’s “Hallelujah” may be a more fitting epitaph for Cohen and his work than this movie:

“I’ve told the truth, I didn’t come to fool you. And, even though it all went wrong, I’ll stand before the Lord of Song, with nothing on my tongue but Hallelujah.”