ME AND THE KID 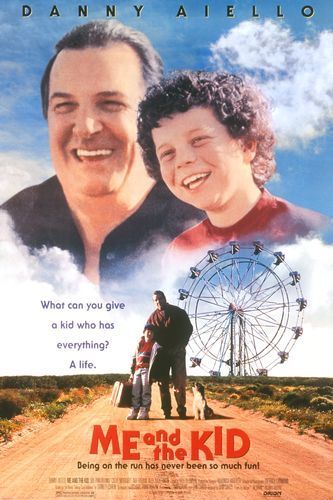 In ME AND THE KID, two thieves break into a mansion and kidnap the child of the house when he interrupts them. The child and the thieves begin many adventures, and a father-son relationship develops between one of them and the child. The film is disappointing and contains too many mixed messages.

In ME AND THE KID, two bungling thieves pose as laundrymen to rob a mansion. Their plan turns sour when the safe is empty, and they are interrupted by the child of the house. They kidnap the child for ransom and head toward Mexico. Gary is an unfortunate child, privately tutored, whose parents are seldom home. One of the thieves, Harry, begins to feel protective of him. As the FBI moves in on them, Roy wants to kill the boy to protect their identities. Harry and Gary escape with the ransom money and are chased by both the FBI and an enraged, vengeful Roy. As they set out for Mexico, their getaway car breaks down, and Harry and the boy find themselves stranded at a small carnival ground. Although they never reach Mexico, the child Gary finds the father figure he needs in the thief, Harry.

Regrettably, this father-figure theme, while badly needed by our society, is not executed with moral consistency. During their journey, Harry steals cars, robs a pawn shop and goes on a shopping spree with the ransom money. There are also several scenes with guns pointed and fired at people, including at young Gary. The scenes with the drunken, enraged thief, Roy, are intense and inappropriate for children. Another scene implies sexual immorality. A predictable rehash of a familiar plot, ME AND THE KID is a disappointing film with many mixed messages.

Producer: Richard Tannenbaum BASED ON THE NOVEL TAKING GARY FELDMAN by: Stanley Cohen