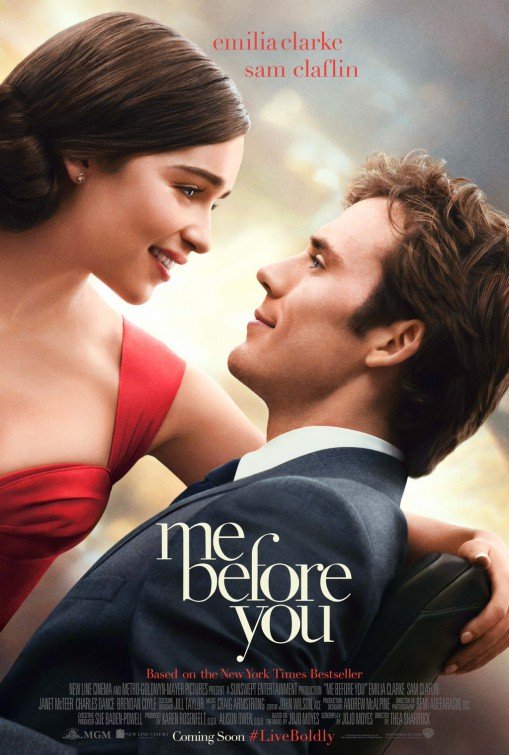 In ME BEFORE YOU, Will Traynor, a young successful London financier, becomes a quadriplegic after a motorcycle hits him one rainy morning. He lives the life of a bitter hermit in his family’s large country estate. Depressed, Will’s made arrangements for an assisted suicide at a Switzerland facility. As a last-ditch effort to change Will’s mind, his parents hire a young woman, Louisa Clark, as Will’s full-time companion. As they fall in love, Louisa desperately tries to persuade Will life is still worth living.

ME BEFORE YOU has some funny, cute moments, but it tries to be a romantic comedy, drama and ethical dilemma all at the same time. The movie is too tentative in handling Will and Louisa’s budding romance. In addition, there’s not much chemistry between the two lead actors and their characters. All this makes the movie unconvincing. Finally, although Louisa and Will’s parents try to convince Will life’s worth living, the ending suggests otherwise. The movie’s shallow, ultimately positive treatment of assisted suicide is revolting. ME BEFORE YOU also contains some foul language and implied sexual content.

(HH, C, B, Ho, LL, V, S, N, A, MM) Strong humanist worldview overall with no thought given to God or biblical morals, though a character wears a cross necklace in some scenes, in a movie that suggests assisted suicide may be okay in certain circumstances, though some characters argue against it, plus a recurring homosexual joke in a couple scenes; 11 obscenities and profanities; it’s implied that a man is hit by a motorcycle and paralyzed; sexual relationships between unmarried couples are implied, and there are several references to sex or innuendo during conversations; natural upper male nudity in several scenes; some scenes show drinking alcoholic beverages; no smoking or drugs; and, quadriplegic man arranges an assisted suicide so that he doesn't have to continue living with a disability, and a woman mentions that she's been divorced three times and is working on her fourth.

ME BEFORE YOU is about an unlikely romance between a young woman and a rich quadriplegic, who wants to end his life. ME BEFORE YOU tries to do too much, the two leads lack chemistry, and the story promotes the despicable idea that some handicapped people are a burden to their families and may be better off dead.

Will Traynor, a young, high-powered London financier, enjoys life in the fast lane. He’s got a nice modern home, a beautiful girlfriend and comes from a wealthy aristocratic family, who owns a castle and takes elaborate luxury vacations in a private jet. On a rainy morning, his girlfriend implores him not to take his motorcycle to work, so Will opts for a cab. As he darts across the street to flag one down, ironically a motorcycle speeds directly towards him, and he’s unable to get out of the way in time. Two years later, Will’s a quadriplegic, with movement possible only in his right thumb after extensive physical therapy.

On the other side of town is Louisa “Lou” Clark, a 26 year-old working girl too afraid to enter Manchester University. Instead, she settles for a job as a waitress in a small coffee shop. With her father out of work in the bad economy, the family relies heavily on Lou’s income, until the bad economy takes its toll on the coffee shop, forcing it to close down. Lou breaks the bad news to her slightly panicked family that night. Their future is in serious jeopardy unless Lou can get another job immediately. The employment office sends her to the Traynor household where Will’s parents are hiring a 9-5 companion for their son, in addition to the hunky male nurse who attends to his physical and medical needs.

After an awkward interview, Lou is hired on the spot and introduced to Will, who is armed with a plethora of sarcastic comments and a cold shoulder. For weeks Lou tries to break through to him, and it is only after she loses her temper with him that he begins to respect her. A friendship slowly emerges, all while Lou is trying to keep her entrepreneur, exercise-loving boyfriend in check as he plans a vacation for them in Norway, which involves participation in a triathlon.

Over the course of six months, Lou and Will fall in love. However, Lou is horrified to learn that Will has been planning an assisted suicide at a death-with-dignity facility in Switzerland. Desperate to change his mind, she begins arranging outings and vacations to get him out of the hermit lifestyle he’s been living for two years. She and Will’s parents hope it’s enough to persuade him that life is still worth living.

ME BEFORE YOU is based on the Jojo Moyes novel of the same name. The movie has some funny, cute moments that are endearing, but it tries to be a romantic comedy, drama and ethical dilemma all at the same time. Also, the movie is too tentative in dealing with a blossoming love between Will and Louisa. In one scene, they barely interact, and in the next they’ll be kissing. The script doesn’t dare to delve deeper into their attraction for each other and decides to keep their feelings on the surface. The chemistry between the actors is also noticeably absent, echoing the lack of chemistry between the characters. All this makes it difficult to buy into a true romance between the two characters.

Most crucial to the plot is the controversy over the morality of assisted suicide, its selfishness, and whether a person’s life is worth anything without the use of their limbs. The issue of religion and God is not brought into the story at all beyond one of the main characters wearing a cross necklace in some scenes. Ultimately, although Louisa and Will’s parents try to convince Will that life’s still worth living, the ending suggests that it’s not. The movie’s shallow treatment of the assisted suicide issue of euthanasia, and its implied advocacy of assisted suicide are abhorrent. ME BEFORE YOU also contains some foul language and implied sexual content.