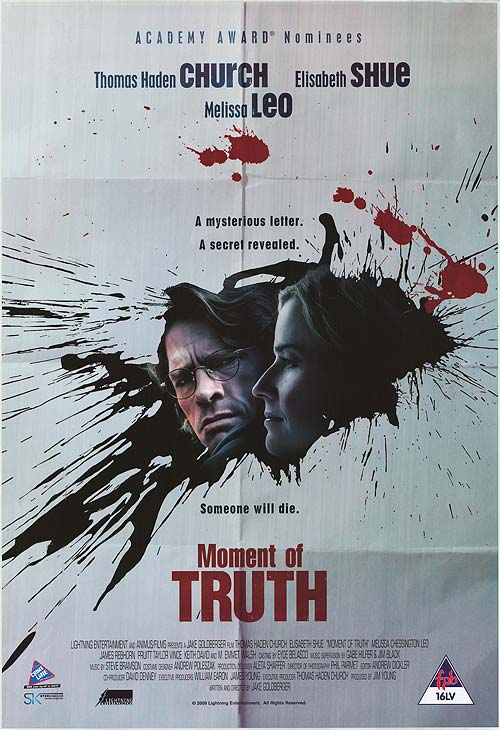 MOMENT OF TRUTH is an evangelistic drama which involves two angels who observe a young man named Norman receive his first Gospel witness. Although most teenagers will enjoy the science fiction aspect of this film, it may be confusing to some who may need clarification. However, MOMENT OF TRUTH has many powerful moments and will help a discerning pastor or group leader present the Gospel and thus bring their teenagers to a MOMENT OF TRUTH.

Far above the earth, an angel named Cheth (Todd Justice) is assigned to educate a visiting angel named Aenon (Michael Bourner) on the reality of spiritual warfare on Earth. The two angels observe the life of young Norman Edwards on a television screen. Concerning the huge digital clock over the screen, Cheth explains, “The Master prepares every human for a moment in time in which in which to encounter the truth about His work in the world. In a matter of minutes, Norman will encounter his MOMENT OF TRUTH.”

MOMENT OF TRUTH is a captivating production with several powerful moments. My only quibble with this film pertains to the characterizations of the angels, who seem more like extraterrestrials on a spaceship rather than spiritual members of the Heavenly Host. Still, a discerning pastor or group leader could find MOMENT OF TRUTH very useful. It speaks not only to the lost about their need for salvation, but also to Christians about the power of prayer and the responsibility believers have to win souls to Christ. Also, the science fiction motif will appeal to many teenagers who are enthralled by the numerous sci-fi fantasies of the mass media.