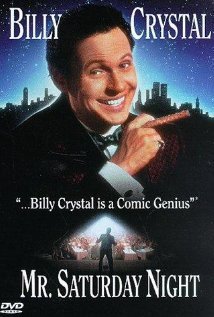 Billy Crystal directs, produces, stars, and co-writes MR. SATURDAY NIGHT about a stand-up comic, Buddy Young, Jr., whose career spans fifty years. The movie overflows with profanities and obscene jokes, and fails because of unconvincing makeup, inadequate development of its minor characters, insufficient conflict, and because its central character does not learn from nor apologize for his mistakes.

MR. SATURDAY NIGHT, written and directed by Billy Crystal, who stars as the irrepressible comedian, Buddy Young, Jr., will not appeal to moral Americans because of its despicable language, ineffective makeup and Buddy’s failure to learn from his experiences and ask forgiveness for the pain he inflicts on those closest to him. In the movie, Crystal brings the fictitious comedian he created eight years ago to the screen. In the process, he becomes relentlessly jokey and shamelessly schmaltzy as he charts the unlovable funnyman’s long career. An entertainer from his earliest childhood in a Jewish neighborhood in New York City, Buddy manages to keep everyone in stitches as he parodies his Jewish relatives. Over the years, Buddy neglects his wife, Elaine, and his daughter, Susan, makes up false jokes about their “stupidity,” ultimately, sacrificing them on his altar of comedic success. After fifty years, this master of insult’s career is over, and he is forced to swap barbs with other old timers at the Friar’s Club. Finally, even his brother, Stan, who has stood by him as his second banana and denied his own life, leaves him to retire in Florida. At an extremely low point, Buddy admits despairingly, “I’ve got cancer of the career. It’s inoperable.”