"They Will Steal Your Heart and Kidnap Your Funny Bone" 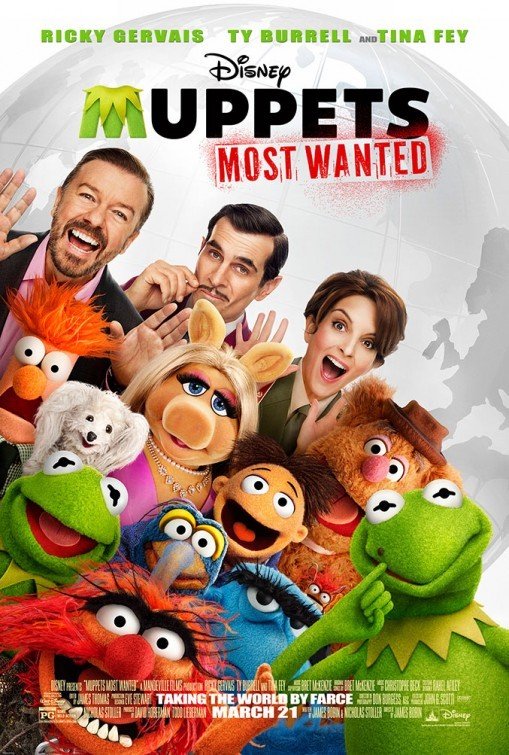 MUPPETS MOST WANTED is another delightful romp with our favorite frog, Kermit, and his friends. Dominic, a dubious tour manager, convinces Kermit and the Muppets to do an overseas tour to follow their last movie. However, Dominic has an ulterior motive. In reality, he is the partner of the world’s Number One Criminal, Constantine, who just escaped from a Russian Gulag. Constantine changes places with Kermit and fools Kermit’s friends. With Kermit out of the way, Constantine and Dominic are free to pursue their plan to steal the Crown Jewels of England and pin the blame on the Muppets. Will Kermit escape the Gulag? Will the Muppets wise up and foil Constantine and Dominic’s evil plan?

MUPPETS MOST WANTED is delightful fun. It’s not quite as good as the last Muppet movie, but it has more musical numbers. Best of all, it has a great positive message. To fool the Muppets, Constantine lets them do whatever they want. Their selfishness ruins their show. Eventually, the Muppets realize they need Kermit’s guidance and rules. MUPPETS MOST WANTED also has several positive references to God.

(BBB, CC, L, V, M) Very strong moral worldview with strong Christian, redemptive content extolling working together and opposing selfishness, Romantic desires, and deceit, with three positive references and appeals to God, including one reference to God during a wedding scene by a Christian Anglican pastor; one borderline My God profanity, plus Kermit the frog pops out of a toilet after using sewers to escape Russian Gulag; light comic, action, and other violence, including bad buys steal a painting by cutting it out of its frame and smash museum statues to find hidden key, some hitting, some pratfalls, forcible kidnapping, and Muppet mayhem on stage; no sex; no nudity; no alcohol; no smoking or drugs; and, selfishness but rebuked, pride but rebuked, villains try to steal the Crown Jewels, villains steal painting, villains commit vandalism, villain kidnaps Miss Piggy, and villain bribes people, including theater critics.

MUPPETS MOST WANTED is another wild, fun ride from our favorite puppets led by our favorite frog, Kermit. It has some positive lessons, plus several positive references to God, but the main goal here is to entertain the audience, both children and adults.

A prologue opens the movie, with the Muppets sad about finishing their last movie. Things turn happy pretty quickly when they get the okay for a sequel and launch into a wonderful song about sequels.

After the song, a dubious tour manager named Dominic Badguy (pronounced Bad-Gee with a hard “g,” Dominic claims) convinces Kermit and the other Muppets to do an overseas tour. Dominic starts the tour off in Berlin, but he has an ulterior motive. In reality, Dominic is partners with international criminal Constantine, who’s just escaped from a Russian Gulag prison and looks exactly like Kermit. Constantine swaps places with Kermit, who gets picked up by the police and thrown back into the Gulag.

Unlike Kermit, Dominic and Constantine tell the Muppets what they want to hear. “You can do what you want,” Constantine tells them. Under Constantine and Dominic, the Muppet show doesn’t go so well, but Dominic has bribed the audience and the theater critics in Berlin, Madrid, and Ireland.

With Kermit out of the way and the Muppets completely fooled, Dominic and Constantine are free to pursue their evil plan – to steal the Crown Jewels in London.

Will Kermit escape the Gulag? Will Constantine and Dominic ever be exposed?

MUPPETS MOST WANTED is delightful fun. It’s not quite as good as the last Muppet movie, but it has more musical numbers. Dominic and Constantine get to sing their own song, “I’m Number One.” Posing as Kermit, Constantine also sings a love song to Miss Piggy, “I’ll Get You What You Want.” Also, Miss Piggy gets to sing a duet with Céline Dion, her idol. Finally, Kermit is forced to lead the prisoners in the gulag’s annual prison revue. As usual, the Muppets will steal your heart and kidnap your funny bone.

Best of all, MUPPETS MOST WANTED is a lesson about the importance of being selfless. When the villainous Constantine tells the Muppets they can do what they want, everyone becomes very selfish and performs things that ruin the show. Thus, Miss Piggy just doesn’t sing one song. Constantine lets her sing five songs! So, Dominic has to bribe the theater audience to give a standing ovation so that the Muppets won’t suspect they’ve been fooled. Eventually, of course, the truth comes out, and the Muppets realize they need Kermit’s guidance.

Like the Muppets, many people today just want to do whatever they want, regardless of any rules or moral standards. When they do that, however, life becomes a disaster. The Good News, however, is that God has given us some moral guidelines. To fulfill those guidelines, He has given His only begotten Son, Jesus Christ, who, through the power of the Holy Spirit, can transform our lives and help us fellowship with God and our fellow man, to walk in God’s path.

MUPPETS MOST WANTED also has several references to God. One of the references occurs in a church by an Anglican priest about to perform a church wedding.

Rent or Buy MUPPETS MOST WANTED: