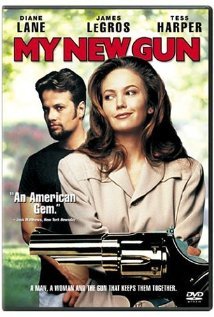 In MY NEW GUN, a repressed suburban housewife learns to fend for herself. Some valid observations about first appearances and reality are offset by unsuccessfully vacillating between comedy and drama. As a whole, the movie is ineffective. Detriments include a casual attitude toward adultery and harsh language.

MY NEW GUN is an appropriately quirky title for this eccentric, low key semi-comedy set among some upscale (though cookie-cutter identical) town houses in suburban New Jersey. The firearm in question is presented by Dr. Gerald Bender, a self-centered radiologist, to his beautiful but passive wife Debbie. To her, this is a metal monster, capable of going off at the wrong moment. Gerald will hear nothing of her anxiety; however, neighbor Skippy is all ears (and eyes, too, as he admires her good looks), hearing loud and clear Debbie’s desire to remove the gun from her premises. So he comes over one night and takes it, setting off unexpected twists in the plot. Dr. Bender proves to be not only callous, but also unfaithful. This, unfortunately, is meant to justify Debbie’s ultimate passage into an affair with Skippy.

Regrettably, the film’s showdown doesn’t congeal into a compelling whole. Part of the problem may be pacing (a bit on the languid side), and another is its vacillating tone. MY NEW GUN teeters on the edge of humor and fear without developing in either direction. While this may have been the intent of first time writer/director Stacy Cochran, the overall effect is one of repeatedly stalling what little spurts of momentum actually develop and ultimately leaving some nagging dissatisfaction with the whole production. That Debbie’s path to independence includes an affair doesn’t add a bit to this story, and in fact, devours it.