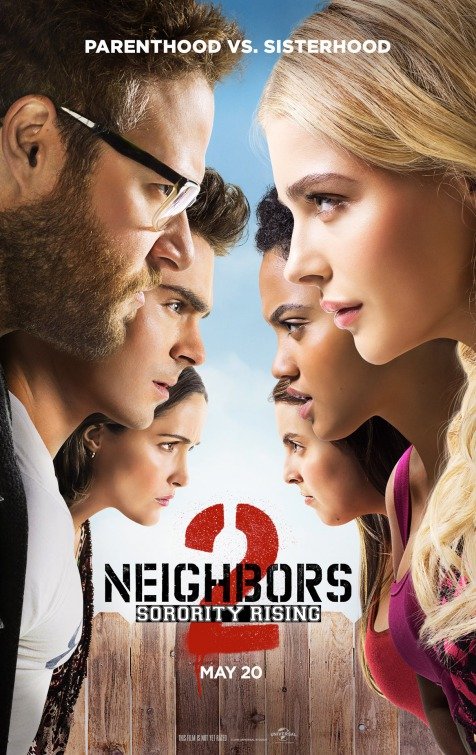 NEIGHBORS 2: SORORITY RISING shows the married couple from the first movie contending with a raucous group of sorority girls. Mac and wife, Kelly, have a young daughter. After buying a new house, they need to sell their current house. A local college girl, Shelby, gets fed up with her university’s strict rules. So, she and some rebellious sorority girls move in next door. The girls get Mac’s nemesis, Teddy, to help them raise as much ruckus as possible. However, Teddy tries to force too many rules on the girls. They kick him out, and he decides to help Mac get rid of them. A comical battle ensues.

From the opening minute almost through the end, NEIGHBORS 2: SORORITY RISING traffics in the worst human behavior in the name of comedy. It’s simply too raunchy to be enjoyable. Worse, it tries to show that young college women can act just as, or even more, depraved, than young college men. With constant foul language, crude comedy and substance abuse, NEIGHBORS 2 is too offensive for anyone with any moral or spiritual discernment.

(PaPaPa, HoHo, C, B, LLL, VV, SS, NNN, AA, DDD, MMM) Very strong pagan worldview with strong positive references to homosexuality and some light redemptive, moral content highlighting forgiveness toward movie’s end; at least 190 obscenities and profanities includes many “f” words, graphic sexual slang and cursing in front of couple’s young daughter, who repeats some of the language; plenty of comic, slapstick violence such as man’s body violently hits a garage doors, pratfalls, car hits young wild woman, man is hit in the face with a used tampon, and a wildly elaborate slapstick chase and fight involving running, jumping, punching, kicking, and tackling, focused on gaining control of a bag filled with seven pounds of marijuana; strong sexual content includes two scenes between a married couple who nonetheless tell crass jokes while engaged in marital relations (in one case pregnant wife gets sick and vomits on husband’s face), provocative comical dancing in one scene, references to rampant promiscuity, and numerous crude references, plus a positive view of homosexuality includes two men portrayed as heterosexuals for most of the first movie are revealed to be homosexual and are shown kissing after one proposes marriage to the other, their heterosexual friend becomes a planner for same-sex weddings, and another character says he’s heterosexual now but nonchalantly says he tried oral sex with men in college; a rear view of part of a man’s private parts, female cleavage and upper male nudity; alcohol use and abuse includes underage drinking; almost constant marijuana use, and marijuana becomes a major part of the plot; and, very strong miscellaneous immorality includes stealing, breaking and entering homes, playing mean-spirited pranks, and wild parties.

NEIGHBORS 2: SORORITY RISING shows the married couple from the first movie having to contend with a raucous group of sorority girls while trying to sell their house. A sequel to a 2014 raunchy comedy, NEIGHBORS 2 is simply not very funny, mostly because of its strong pagan, immoral worldview that includes lots of foul language, crude jokes, gross comedy, mean-spirited pranks, and substance abuse.

Mac Radner (Seth Rogan) and his wife Kelly (Rose Byrne) are a young suburban married couple with a young daughter. In the first movie, they were forced to do battle against a ruthless, hedonistic, reckless fraternity led by a guy named Teddy (Zac Efron). This time, the couple are about to sell their home to a new couple and have to survive 30 days of escrow in order to accomplish that. The stakes are made even higher by the fact that they already have purchased a new home, and, if the sale falls through, they will owe money on both homes and be financially ruined.

Just as they think it’s smooth sailing, a local college girl named Shelby (Chloe Grace Moretz) gets fed up with her university’s strict rules, which prevent sororities from throwing their own parties. Together with other rebellious outsider girls, she decides to launch her own off-campus sorority free from the campus rules. So, the girls decide to rent the house next to Mac and Kelly.

When Shelby and her crew meet Teddy, who wants revenge against the Radners for losing his fraternity and his power, Teddy offers to help them raise as much havoc as possible and ruin the Radners’ lives again. However, when the girls decide that even Teddy is forcing too many rules upon them, they toss him out of the house. Utterly helpless, Teddy is invited to live with the Radners, and the former enemies team up to root the girls out in time to sell their house.

What ensues is a battle royale that hinges on mass quantities of marijuana, underage alcohol consumption, implied promiscuity, and all manner of dirty tricks and backstabbing. Utterly disgusting sexual matters are discussed and shown, with some of the most vile moments inviting the toddler daughter of the Radners being subjected to horrible language and behavior. A few brief scenes – including a chase and battle over a bag of marijuana – are well-staged enough to draw some inadvertent laughs, but NEIGHBORS 2 otherwise is an immoral comedy mess.

From the opening minute almost all the way through the end, NEIGHBORS 2: SORORITY RISING traffics in the worst human behavior in the name of comedy. It’s simply too raunchy to be enjoyable. Worse, the behavior depicted is intended to make it seem admirable that young women in college can act just as, or even more degrading, than young college men.

In the end, the warring parties do make some peace and forgive each other, but it’s a case of too little, too late to be redemptive in any form or fashion. NEIGHBORS 2 is a must to avoid for anyone with a sense of moral or spiritual discernment.