"The Rise and Fall of Vocalist Nina Simone" 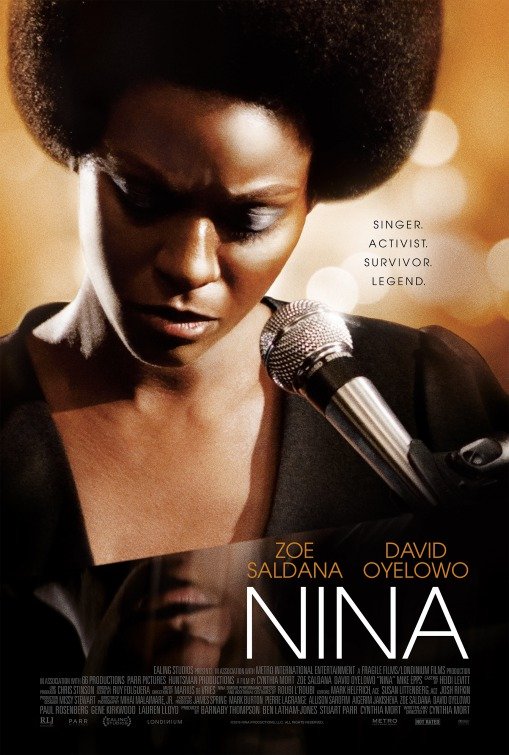 NINA is based on a true story about 15-time Grammy nominee Nina Simone and her relationship with her manager, Clifton Henderson. After a psychotic episode, Nina is sent to the hospital. There, she meets Clifton, a nurse who brings her back to health. After she’s released, Nina asks Clifton to be her manager. He agrees, but once he commits to manage Nina, he’s in for the ride of his life with this raging alcoholic, violent and verbally abusive woman. Through his patience and support, Nina makes a comeback in the music scene.

NINA has a positive moral worldview showing that the persistence of good virtues can combat evil. Through Clifton’s love, kindness and mercy, Nina learns that good people do exist in this dark world. Nina is an entertaining drama but the script is mediocre with predictable scenes and dialogue that are far from interesting. However, the musical component brings the movie back to life with invigorating songs performed by Nina, who’s portrayed by Zoe Saldana. Because of the excessive drinking, foul language and immoral elements, MOVIEGUIDE® advises extreme caution on NINA.

(BB, C, LL, VV, S, NN, AAA, D, MM) Strong moral worldview with redemptive elements, where one man demonstrates love, compassion and mercy to a female singer, who lives a sinful life of drunkenness, greed and sexual immortality, but who through good virtues is inspired to change; 21 obscenities and profanities; moderate violence of a mentally unstable woman constantly acting out, including title character throws a champagne bottle at her manager, breaks a lamp in her manager’s office, cuts a man with a knife resulting in a bloody arm, punches a man at her concert, kicks and hits two armed men taking her into psychiatric care, and pushes and screams in her manager’s face daily; implied adultery and sexual promiscuity, title character mentions sleeping with men, one shot of woman in bed with a man she met at a club; rear female nudity; heavy alcohol and drunkenness displayed; heavy smoking and character takes medication for her illness at the hospital, but no use of illegal drugs displayed; and, strong miscellaneous immorality including lying, stealing, greed, racism, and bad role models, but not all condoned.

NINA is based on a true story about the talented jazz vocalist Nina Simone and her rise and fall to stardom while battling alcohol abuse and mental illness. Though it falls a little short, NINA is entertaining with a positive moral, redemptive message, but because of some foul language, plenty of excessive drinking and other questionable elements, extreme caution is advised.

The movie opens up in 1946 North Carolina with a sweet little girl (Nina) performing in a piano recital for her parents, showing her gift for music at such a young age. Cut to years later: Nina is a successful recording artist, but has a bad reputation of being an alcoholic and being quite difficult to work. Nina sits in her manager’s office, Henry Edwards (Ron Guttman), who tells her she signed her royalties away years ago and has no rights to them. Nina becomes unhinged and pulls a gun on the executive, which leads her to a psychiatric hospital.

Nina is diagnosed as an alcoholic with mild paranoia. She tries to run from the hospital but is sedated and put into restraints. Clifton Henderson, a young male nurse, is assigned to care for her. He gains Nina’s trust as he nurses her back to health. After she’s released, she asks him to be her assistant and come with her to France. Clifton agrees to go with her, but is in for the ride of his life.

Away from the hospital, Nina reverts back to her aggressive behavior and old habits of drinking champagne for breakfast and refusing to take her medication. After Nina drinks, she sleeps the days away leaving Clifton ample free time where he begins to explore the old house. He finds press cuttings and recordings, learning about all of Nina’s past accomplishments and what a success she was.

A few days later, Henry calls to tell Clifton he booked a gig for Nina in Paris. Clifton tells Henry she isn’t well enough to perform, but Henry demands he get her there and let her do the rest. Clifton gets Nina to the club to perform, but once on stage she panics when she notices people aren’t paying attention to her. Grabbing a butcher knife, she runs off the stage and stabs a stranger in the arm because he was talking over her songs.

After this catastrophe, Clifton asks Nina why she is so hostile, but she refuses to give a concrete answer. Instead she rewards him for putting up with her and takes him on a vacation in Nice, continuing to mask her problems with distractions. During vacation, Nina tries to seduce Clifton to sleep with her. Clifton refuses and has had enough. He quits and returns home to Chicago. Will Clifton ever return? Will Nina be able to fix her reputation?

NINA is an entertaining movie, but it’s nothing to special. The script falls short of a strong storyline. Also, the characters are sterile and underdeveloped. Zoe Saldana has a wonderful list of credits, but her performance falls short for this role. NINA revives the predictable script with the music component, mixing powerful Nina Simone songs throughout the movie to bring it to life. NINA has a strong moral worldview showing that with kindness and good virtues people can change. However, the movie contains bad role models, alcoholism, sexual promiscuity, and plenty of foul language; so, MOVIEGUIDE® advises extreme caution for NINA.