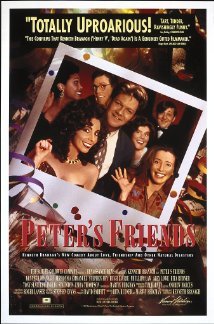 In PETER'S FRIENDS, a close-knit group of university eccentrics reunite to celebrate New Year's Eve, ten years after their graduation. All together, it is a weekend of nonstop bickering, out-of-control sexual desires and awkward mix-and-matching.

In PETER’S FRIENDS, a close-knit group of eccentrics reunite to celebrate New Year’s Eve, ten years after their university graduation. It is a weekend of nonstop bickering, out-of-control sexual desires and awkward mix-and-matching. Hosting the party is Peter (Stephen Fry), a bisexual who is stricken with the HIV virus. Having inherited his father’s British mansion, Peter invites his friends over for the weekend: Mary and Roger, who arrive burdened with their infant son’s death; Maggie, a shabby single who ends up fornicating with the maid’s grandson; Sarah, who is sleeping with a married man named Brian; and, Andrew (Kenneth Branagh), an inspiring playwright who created a successful TV sitcom and married the star, Carol, a neurotic, ego-centric dieter.

PETER’S FRIENDS brings to mind the words of Jeremiah 6:15: “Are they ashamed of their loathsome conduct? No, they have no shame at all; they do not even know how to blush.” Nothing quite gels in this mediocre film. Characters nitpick and lock horns, but their annoying disputes are anything but funny. Most surprising is the lack of chemistry among the cast. PETER’S FRIENDS strains to show warmth and compassion, but doesn’t have any to spare.