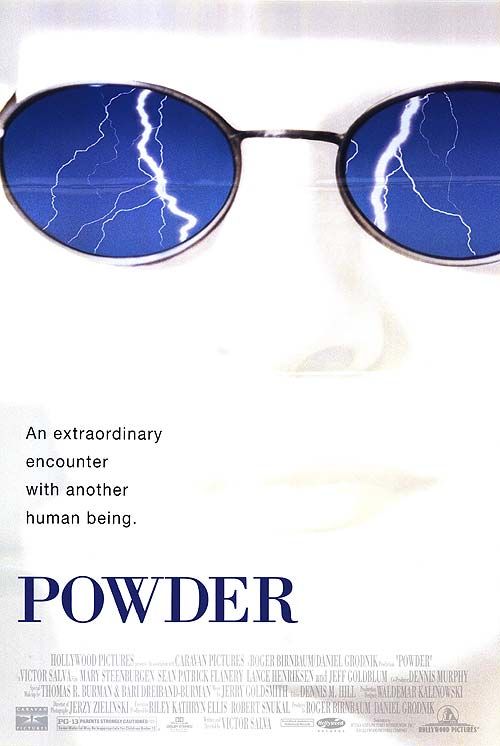 POWDER is the quintessential new age movie. Jeremy Reed (Sean Patrick Flanery), known as Powder because of his startling white skin produced by a lightening strike on his mother when he was in the womb, is the next step in the evolution of man towards cosmic oneness according to the movie. After he tries to use his psychic powers to make friends and avoid researchers, he becomes one with the universe. POWDER is a poorly written, poorly directed story that has little or no grasp of the Truth or entertainment.

POWDER is the quintessential New Age movie. Jeremy Reed is purportedly the next step in the evolution of man towards cosmic oneness. Jeremy was born sparkling white after his mother was hit and killed by lightning. After his grandfather dies, Jeremy is discovered hiding in a basement by a teacher named Jessie. He is surrounded by books and can quote them verbatim. Jessie takes POWDER to her school, where the teenagers are less than friendly. In dealing with their taunts, Jeremy displays some of his psychic abilities. Also, Jeremy knows what they are thinking. The academic community wants to use him for a research. After several fights, electrical pyrotechnics and explanatory dialogue, Jeremy goes back to the farm, runs into a field, gets hit by lightening, and becomes one with the universe.

Most discerning moviegoers will abhor POWDER. Not only is it a New Age diatribe, but it also has weak direction. Jeff Goldblum seems to have no direction at all. Mary Steenburgen’s fine acting talents are wasted. Even Jeremy, who is supposed to be the future of mankind, walks as if he is suffering from some extreme form of palsy. It is a poorly written, poorly directed story, that has little or no grasp of the Truth.