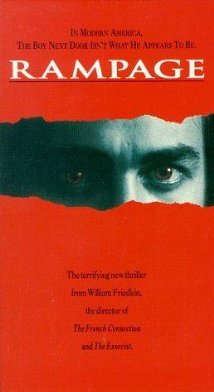 Adults on true-life events, RAMPAGE depicts a demon-possessed serial killer who butchers innocent people, cuts out their organs, and drinks their blood. As the killer is captured and brought to trial, RAMPAGE examines the tensions between psychiatry and law, while attempting to inform audiences about victim's rights, professional ethics, and the death penalty. While these issues warrant careful attention and consideration, the movie's grisly close-ups of cadavers, disjointed storyline, hostility toward God, and overall mean-spiritedness do not.

Interested in a demon-possessed serial killer who butchers innocent people, cuts out their organs and drinks their blood? The makers of RAMPAGE thought you might be. Based on true-life events, the movie traces the blood-curdling escapades of a paranoid schizophrenic, leading to his capture and trial. Ironically, the movie, RAMPAGE, attempts to inform audiences about victim’s rights and the death penalty. While these issues require our careful attention and consideration, the movie’s grisly close-ups of cadavers and disjointed storyline do not.@@@Of particular concern is the filmmakers’ contempt for the Christian faith. In the character of Charles Reece, the movie’s serial killer, the filmmakers create a perverse, so-called Christian believer, who claims to be chosen and hears delusional voices telling him to kill. In one scene, the killer crashes through the stained glass window of a church, stabs the priest, destroys the altar and statues, and spray paints the walls. In another, after four gruesome slayings, a relative of the victims blames God for the events. Thus, the filmmakers mock the Christian faith. In fact, overall, RAMPAGE slaughters our hope for our fellow man.