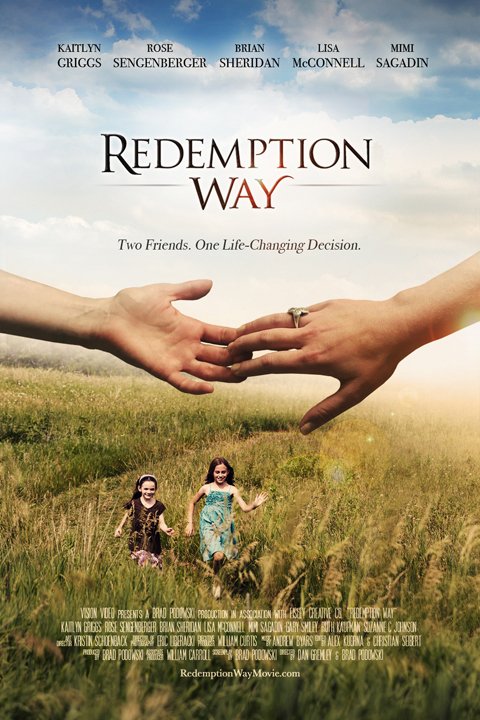 REDEMPTION WAY is a faith-based movie available on DVD, Amazon and elsewhere. Jenny is a married hospice worker who wants to get a promotion at work so she and her husband can afford to adopt a child. A devout Christian, Jenny learns her childhood friend, Autumn, is dying of leukemia. Autumn has requested no religious counseling from Jenny’s hospice, even though Jenny isn’t representing her company when she visits her dying friend. So, Jenny is faced with a terrible dilemma.

REDEMPTION WAY is a powerful drama with a strong, heartfelt Christian, biblical message about turning to God. The movie has a very satisfying ending that will bring viewers to tears. It promotes adoption and presents viewers with profound questions about how best to evangelize people. That said, although the movie has multiple references to God, Heaven, faith, and the Bible, Jesus is only mentioned once. If the filmmakers added a comment about trusting in Jesus as God or trusting in His death and resurrection, REDEMPTION WAY would be perfect. MOVIEGUIDE® advises caution for younger children because of scenes about death and dying.

(CC, BBB, H, M):
Dominant Worldview and Other Worldview Content/Elements:
Strong Christian, evangelical worldview, but only God, Heaven and faith are mentioned more than once, and Jesus is only mentioned once, and repentance is never mentioned, so the arguments for faith are more personal or psychological rather than moral , but the movie very strongly promotes reading and living the Bible, the Matthew 6:26, a prayer to God is answered, and adoption is promoted
Foul Language:
No obscenities or profanities
Violence:
No physical violence, but there’s one scene with a dying older person in distress, and there are scenes with a young woman dying of leukemia
Sex:
No sex
Nudity:
No nudity
Alcohol Use:
No alcohol use
Smoking and/or Drug Use and Abuse:
No smoking or drugs; and,
Miscellaneous Immorality:
A colleague at work lies about a rival, but her actions are rebuked.

REDEMPTION WAY is a faith-based movie on DVD and Amazon about a female Christian hospice worker trying to find the best way to witness to her atheist childhood friend, who’s dying of leukemia. REDEMPTION WAY is a powerful drama with a strong heartfelt Christian, biblical message about turning to God, but Jesus is only mentioned once. Caution is advised for younger children because of scenes with a young woman dying.

The movie opens with two children, Jenny and Autumn, playing in the house while Jenny’s mother is on the phone. Jenny and Autumn sneak outside and Autumn heads toward the pool outside, but Jenny’s mom catches her just before she gets too near the water.

Cut to years later. Jenny is a hospice nurse helping an elderly woman in distress to breathe. An ardent Christian, Jenny works for a hospice company called New Hope. She hopes to get a promotion at work so that she and her husband, Todd, can afford to adopt a child, but Todd is still skeptical about being able to afford to adopt a child at the moment.

While at work, Jenny hears that her father, who divorced her mother, has died. At the wake after his funeral, Jenny gets angry when her mother says her father’s in a better place now because her father never seemed to believe in God. Jenny goes outside on the front porch to cool off when her old friend Autumn appears. Autumn has been living out of town, so the two women haven’t seen each other in years. Also, however, Autumn stopped calling Jenny because she’s an atheist and feels uncomfortable with her old friend’s Christian faith. Despite that, the two women are happy to see one another, but Autumn doesn’t stay long.

A couple days or so pass, and Jenny is shocked to learn that Autumn is dying of leukemia and has become a client of New Hope. She’s prevented from becoming Autumn’s nurse, however, because that would be a conflict of interest. So, the job is given to Jenny’s rival at work, who’s also vying for the promotion.

Of course, Jenny still goes to see Autumn at her parents’ house and brings a Bible to give to Autumn. They briefly discuss Jenny’s Christian faith, but Autumn is still adamant about being an atheist. Jenny’s rival secretly overhears the conversation and lies about the discussion to Jenny’s boss. Her boss orders Jenny not to mention religion to Autumn anymore, because Autumn has requested no religious counseling. Also, Jenny still represents the company when she visits Autumn, even though Jenny’s not there in an official capacity.

Jenny still cares deeply about her friend’s eternal destiny, however. If she keeps witnessing to Autumn, Jenny could endanger her job. If she stops witnessing, she’s letting down her faith and her friend. Jenny prays to God for an answer.

REDEMPTION WAY is a powerful drama with a strong heartfelt Christian, biblical message about turning to God. The movie has a very satisfying ending. It also promotes adoption and presents viewers with some profound questions about evangelism. For example, if you witness to a friend or relative, but the friend or relative is antagonistic, you run the risk of the person refusing to talk to you anymore. However, what if the friend is close to dying, with little time left? The movie doesn’t present any definitive answers to these questions, but it presents the dilemma in an emotionally powerful way that will bring viewers to tears more than once.

That said, although the movie has multiple references to God, Heaven, faith, and the Bible, Jesus is only mentioned once or twice. Also, the movie never mentions repentance. Thus, the evangelism in the movie is more personal and psychological rather than moral or religious. If the filmmakers added a comment or two about trusting in Jesus as God or trusting in His death and resurrection, REDEMPTION WAY would be perfect. Of course, none of this should stop people from presenting this movie to their atheist friends and relatives and telling them about Jesus and the hope He brings to those who believe in Him.

MOVIEGUIDE® advises caution for younger children because of the movie’s scenes about death and dying.