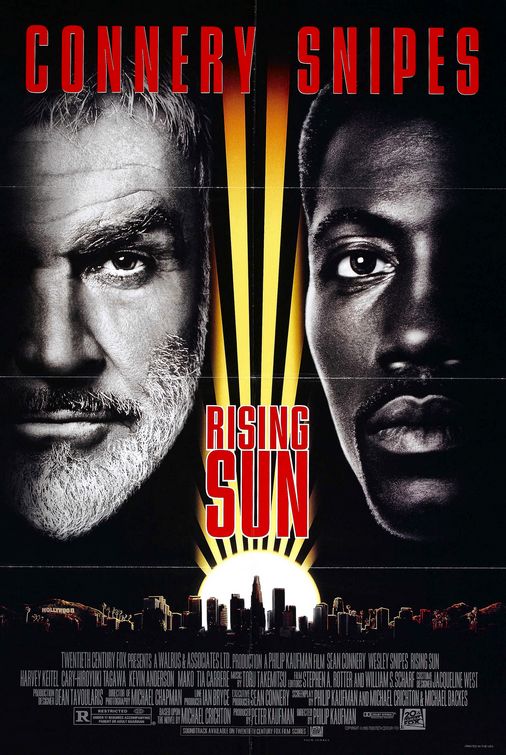 RISING SUN (based on Michael Crichton's novel) presents a slick look at corruption perpetrated between a Japanese conglomerate seeking a favorable trade pact and the United States government. The hi-tech plot is complicated, and, despite good acting by Sean Connery and Wesley Snipes, the movie fails from lack of morality, stereotypical culture portrayals, kinky sexual overtones, vulgar nude scenes and extreme violence.

BASED ON Michael Crichton’s novel, RISING SUN presents a slick look at corruption perpetrated between a Japanese conglomerate seeking a favorable trade pact and the United States government. A murder during a late-night political dinner in the corporate suite of a Japanese firm causes Web Smith (Wesley Snipes) and John Connor (Sean Connery) to be called in to investigate. They follow clues that lead them on wild car chases and fights and are pursued by angry Japanese martial arts bad guys who attempt to keep them from doing their job. The hi-tech plot is complicated and built around the premise that the Japanese are paranoid businessmen who mistrust the low-life Americans who will do anything for money.

There are several plot twists involving blackmail, framing and a suspected death. Although Sean Connery and Wesley Snipes are the only redeeming elements in this movie, even their ability to act well is overshadowed by the confusing plot, the absence of morality, the stereotypical culture portrayals, the kinky sexual overtones, vulgar nude scenes, and extreme violence, which give this movie a cheap, “grade B” feel. It is disappointing to see the talents of such excellent actors be reduced to this level.