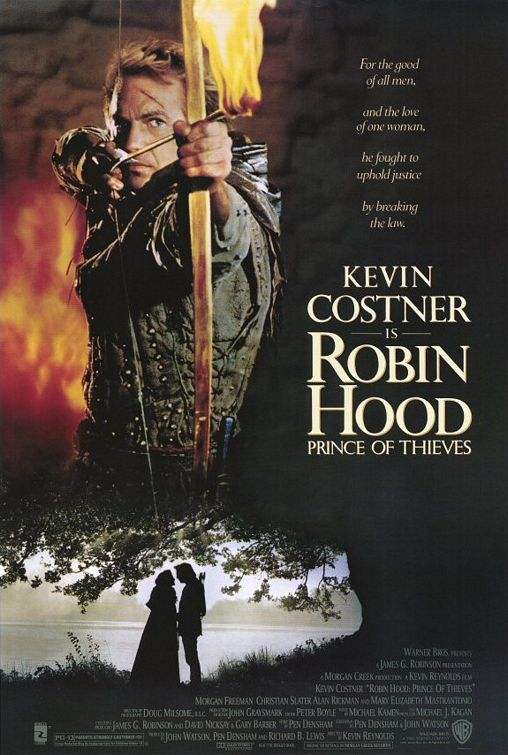 In the swash-buckling ROBIN HOOD: PRINCE OF THIEVES, based on a 12th Century ballad, Kevin Costner goes from dancing with wolves to frolicking with his merry men as they steal from the rich and give to the poor. Although the cinematography, costumes and acting are fairly good, film title "Prince of Thieves" and premise of stealing are devilish and anti-biblical, and finally, mar the plot.

ROBIN HOOD: PRINCE OF THIEVES, based on a 12th Century ballad, splashes across the screen in a blaze of swash-buckling grandeur rarely seen in recent films as Kevin Costner goes from dancing with wolves to frolicking with his merry men and with maid Marian as they steal from the rich and give to the poor.

The film opens in Jerusalem at the time of the Third Crusade (1190 A.D.) led by King Richard I, or Richard the Lion-Heart. Jerusalem remains in Moorish hands, and Robin of Locksley and his companions are being held in an enemy prison.

Before long, they escape, accompanied by a new Turkish friend, Azeem, who helps them flee the city and country, and who returns to England with them. However, Robin’s return becomes grievous as he learns of his father’s death and the destruction of their castle Locksley by the evil Sheriff of Nottingham.

Accosted by the villain’s cousin, Robin and Azeem flee into haunted Sherwood Forest where they encounter disenfranchised and disgruntled Little John and his cohorts. After he grapples with Little John in a mid-stream jousting bout, Robin emerges the winner, and he and Azeem join forces with the band, and Robin becomes the new chief.

Soon, as the Sheriff’s men try to destroy Robin and his band, the action picks up, with several violent encounters between the two adversaries. One episode occurs at Maid Marian’s as the villainous Sheriff attempts to take her to his castle intending to marry her. However, he accepts her refusal this time, and Robin and his men retreat to the Forest.

Meanwhile, Robin and his merry men rob most of the wealthy people entering Sherwood Forest. They even rob Friar Tuck who sees the Lord’s hand in humbling him so he joins them and contributes some rather ribald humor to the plot.

ROBIN HOOD: PRINCE OF THIEVES is a fairly well-produced movie in its cinematography, stage sets, costuming, and acting with very few objectionable elements. Shot in England, the lush, green English hills and luxuriant forests provide a proper setting for this legendary English champion of the poor. The costumes, while deviating from the typical green tights and pointed caps portrayed in other ROBIN HOOD versions (i.e., the 1938 Errol Flynn rendition), nevertheless are in keeping with twelfth-century English dress.

Although Costner and Morgan Freeman, as Azeem, turn in creditable performances, the film is marred by two flaws. One flaw is the rather graphic attempted seduction of Marian by the Sheriff as he tries to consummate their marriage (no nudity, however). The other flaw resides in the film’s title and premise. For Christians, to call Robin Hood the Prince of Thieves equates him with the devil, who comes to “steal, kill and destroy” (John 10:10). Even the premise of robbing from the rich to give to the poor is anti-biblical. Christians are to be content with what they have and “to give thanks always in all things.” Again, in movies like ROBIN HOOD, Christians have an opportunity to go against the grain and become salt and light to a humanistic culture.

However, in the balance, it must be noted that Robin and his men are fighting for the legitimate authority in England, King Richard the Lion-Heart, against the usurpers, Prince John and the Sheriff of Nottingham. Thus, they are stealing from those who have stolen from the legitimate owners and intend eventually to restore Richard and the rightful authorities in England. In effect, Robin is not the Prince of Thieves, but rather a vassal of a displaced king who has his master’s interests in mind. In the original ballad, this Christian theme is more pronounced than in this film version. Furthermore, the addition of Azeem, the Muslim, to their group denigrates the position of Friar Tuck who was the Christian conscience of the mythic band.

Before you go to see ROBIN HOOD: PRINCE OF THIEVES, you may want to read the original ballad or rent the 1938 Errol Flynn movie to help understand the metaphors and symbols in the original story. Our heroes should not be thieves (even those who exchange the mythic Christian archetypes of history for the gilded fools of the New Age), but those who represent the Legitimate Authority, Jesus the Christ.